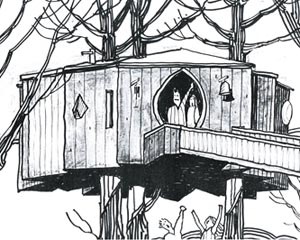 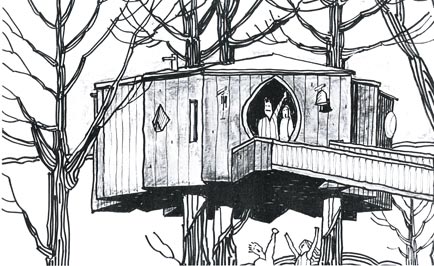 Andy Poineau is known for the one-of-a kind, meticulously crafted homes he builds in the Charlevoix area. Outfitted with a multitude of custom features, the houses are situated in the most beautiful settings—on lakes, on rivers, on hilltops. But in trees? Not until Poineau agreed to pitch in and build East Jordan’s Raven Hill Discovery Center the tree house of its dreams. Poineau’s 15-by-12-foot design will rise eight feet off the ground and take the shape of a maple leaf. He and his craftsmen will shape the lobes from 23 wall segments—wall space for plenty of windows and the nooks and hidden passages that children love. And did we tell you that this maple leaf mansion will have a metal roof?

When Poineau and his crew are finished, Raven Hill’s CEO and founder Cheri Leach will take over and outfit the tree house with a telescope, kaleidoscope, periscope and wind chimes—all tools to help children connect science and art with the outdoors. Leach is a part of the Leave No Child Inside,” movement that spawned from the book Last Child in the Woods: Saving Our Children From Nature-Deficit Disorder by Richard Louv.