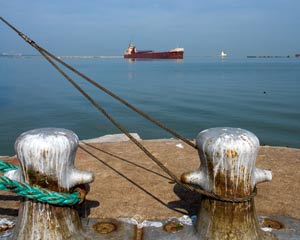 When you watch ocean freighters edge past the Great Lakes horizon this year, know that they are less likely to be carrying invasive species, called biological pollution, in their ballast tanks. When the St. Lawrence Seaway opened this spring, the United States began requiring loaded freighters coming from overseas to perform what’s called a "swish and spit," industry parlance for sucking salty seawater into ship ballast tanks, holding it for a while and then purging it. The saltwater kills organisms that can live in freshwater and lightly salty water (brackish water), which are the types of organisms that escape to thrive in the Great Lakes, disrupting the food web.

"We can’t say the risk has gone to zero," says Dr. David Reid, director of the Office of Invasive Species, within the National Oceanic and Atmospheric Administration. "But my prediction is the new requirement has put a huge and highly effective filter on invasives that have been coming in and has greatly reduced the risk of ballast water to the Great Lakes." If, for example, the rule had been in place decades ago, the odds of the zebra mussel escaping to the Great Lakes would have been greatly diminished, because the mussel does not survive higher salinity.

The Canadians have had the swish-and-spit requirement for two years.

The U.S. policy does, however, have one important loophole: Ships that move up and down the North American coast but do not go out to sea are exempt from the swish-and-spit requirement. A recent deadly invader to the Great Lakes, viral hemorraghic septicemia, came from the Canadian Maritime Provinces and probably would not have been stopped by the new rule if it did enter via a ship ballast tank.

Look for Great Lakes protectors to press for expansion of the policy’s breadth.