Longtime trout-obsessed, river-mad poet and essayist Michael Delp was crowned king at the National Trout Festival in Kalkaska this week. We called him at his castle to find out if he wears his crown when he drives and some other stuff. 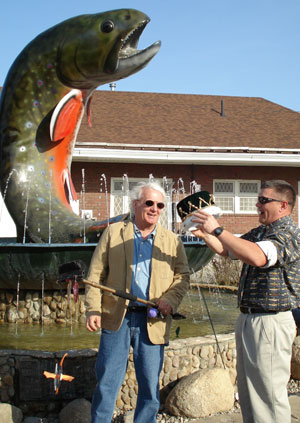 Michael Delp (left) about to be crowned Trout King

Do you wear your crown when you drive?

No, I can’t because my headliner is too low. But I might wear it to fundraisers for local politicians so I can tell them what to do.

What do you plan to do for the people?

Pretty much ignore ’em. I’m a rabid recluse. And I’m a despot.

My favorite trout river is the North Branch of the Au Sable. It’s secluded, not a lot of access, and lots of fun. I have very close friend with a place there, and there’s nice fishing. My second favorite of course is the Boardman, where I have a cabin. After 25 years of fishing that river it still befuddles me.

The biggest brown trout I ever caught was 28 inches. It was really late at night, during a hex hatch. Unfortunately I had no net and a lousy light, and I just did not get a good look at it. I measured it against my rod and I put a nick in my rod just so I could measure it with a tape later and I’d always remember it when I looked at that nick.

I don’t eat a lot of trout. But when I do, it’s a spiritual exercise. It’s good to take some sustenance from a place you love. I like it broiled. Butter, little garlic, salt and pepper. Nothing fancy. There’s a Nick Adams story where he wraps a trout in clay and puts it in the campfire, and when the clay cracks the fish is done. I want to try that this year.

What do you most look forward to during your reign?

The trout should be just rolling up to me. Offering themselves in supplication.

The Mad Angler speaks Truth to Power
By Michael Delp

I say that water is better than money,
Something wet and smooth to be taken in and coveted.
I say that long ago we spoke to water and it spoke back.
Water is a form of being saved, lying down,
something wise in our cells seeking gradients,
places to run and places to rest.

I claim that once in a dream
I walked on water.
Storms came.
I entered the clouds and when I came back down
I spit the truth.

You might know this truth in your own ears,
when sleep fails you and you walk out into half moonlight
listening for crows gathering darkness into their throats
and if you ever lose track of the river you will hear it once again in their throats:
water coming from upstream, crow talk about water that seeks its way,
seeks you as a reservoir to be itself,
gives you more knowing than you will ever need,in case you ever become lost again.