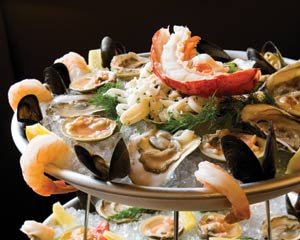 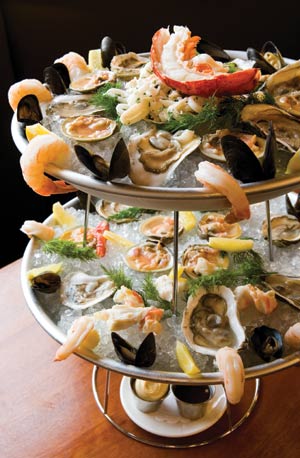 Seafood is the backbone of chef Michael Peterson’s menu at Siren Hall – try the mussels in curry cream served in a French cast-iron pot – but look for local fish and bistro classics like steak with chimichurri sauce and local asparagus that put Peterson’s first restaurant, Lulu’s in Bellaire, on the map. Siren Hall’s interior is Rebecca Peterson’s minimalist, Michigan take on the classic seafood shacks. She pairs cement with original wood beams and brick, lavish chandeliers, and a reclaimed Douglas Fir girder from Puget Sound as the bar. The street-front patio (a downtown Elk Rapids filling station, once upon a time) is due to open the third week in May. Slip into a spring night spent taking in the fresh lake air and sumptuous, fresh-off-the-plane fruits de mer.

We check in with Michael Peterson (chef-owner) and Rebecca Peterson (restaurant design) about their new harbor town venture.

Siren Hall’s style is inspired by the crab shacks of the Eastern seaboard?
R: Yes, but we wanted a modern interpretation. When we were out in Newport, Bar Harbor and Cape Cod, we kept thinking about the Great Lakes and the mariner tradition here.
M: We also spent a lot of time at one of my favorite restaurants, Lure, in Soho, and I looked at how the chef there operated a seafood kitchen. We use the same fish file he had on the line – four drawers with drains, to keep the seafood on ice without it swimming in water.

And what are you filling those fish files with?
M: Cold-water clams, oysters and mussels from Canada, Alaska, Washington and Maine. It’s great to compare the flavors of oysters from different locales, some are brinier, some are meatier – the Kumamoto from Washington is a tiny, creamy oyster.

Even the tomato ketchup for your hand-crafted risotto “tots” is made in-house. What goes into it?
M: A lot of reduction … It’s chipotle based, with allspice, cinnamon and brown sugar.