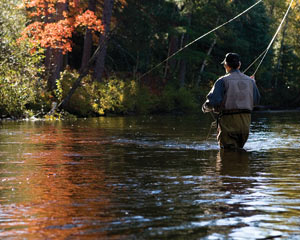 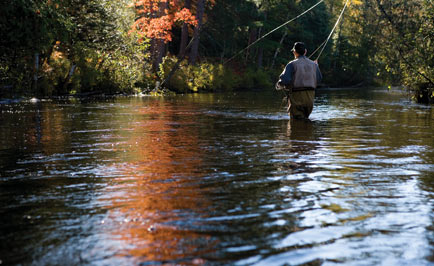 This Saturday, April 26, looms large in minds of fishermen and fisherwomen all across Michigan’s watery kingdom because it’s opening day for trout, pike and catch-and-release bass.

The recent weeks leading up to the opener portend good things, if the weather holds, says Kirk Novak, owner of The Northern Angler, of Traverse City. "We had good snow this winter and some rain, so the rivers are up, and this week’s 70-degree weather has brought the water temps up too." Even better evidence can be found in a couple of the North’s year-round catch-and-release stretches of river. "People who have been out on the Au Sable and Manistee have caught some nice browns. I’ve seen the photographic evidence," Novak says.

For opening weekend, the weather is supposed to turn colder, with highs in the 50’s, and possibly rainy, which would keep down the bug hatches that every devoted dry-fly angler hopes for. But Novak says a fly box stocked with Hendricksons, little black caddis and blue wing olives should serve the angler well nonetheless.

One trend Novak sees that he likes is that more and more people are discovering that trout are not the only fish to pursue with a fly rod. "Pike will be up in the shallows, so I know a few guys who will be throwing some 6- and 7-inch pike flies this weekend." A few lakes near Traverse City he recommends for pike: Arbutus, Spider, Boardman and Lake Dubonnet.