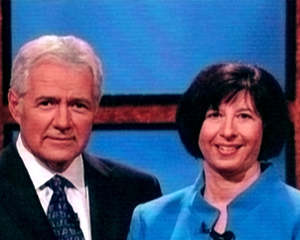 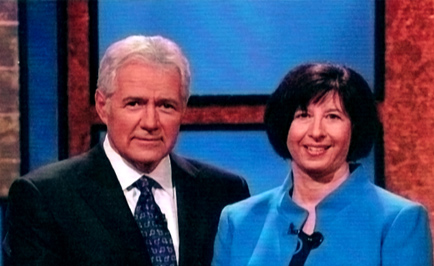 Rosalind Jaffe, like so many of us, says she was always good at answering Jeopardy! questions (or is it questioning answers?) in her living room. On a whim a year ago in January she took an online test, and made it to a mock Jeopardy! tryout in Chicago last August. She got the call this January that she had three weeks to prepare for her big chance to win on the quiz-style game show, which began in 1964 and has aired five times a week with host Alex Trebek since 1984.

Jaffe, a manager at Huntington Bank in Manistee, flew out to Los Angeles for taping at Sony Pictures studios on February 12th. (They tape five shows in one day, so the producers asked her to bring three changes of clothes in case she went on to subsequent rounds.) She is tight-lipped about how she did on the show, but gave us some insight on what it feels like to be a Jeopardy! contestant.

“The first time I wrote my name on the screen, it looked terrible! It took me three times,” she says. “The staff does a great job of keeping you calm. When you’re playing, you don’t get nervous. Just in the downtime.”

As you may have always hunched, Jaffe says people who are best at this game have excellent buzzing skills. “Buzzing is key,” she says. “If you buzz in too early, you’re locked out for a couple of minutes.” Jaffe says she was really bad on the buzzers at the tryouts, so to prep she practiced with a clicker pen. “For the three weeks before the taping, I would stand up in my living room during the show—it’s really different than sitting on the couch shouting out answers with a cup of coffee in your hand—and practice answering with a question.”

Tune in and watch this Onekama quiz whiz on Monday, April 21st, or join the locals cheering her on at TJ’s Pub that night in downtown Manistee (399 River St., 231-398-9174). The TV event is sponsored by Manistee Sunrise Rotary Club to benefit Big Brothers Big Sisters.