A House Made from Clay and Straw. Really. 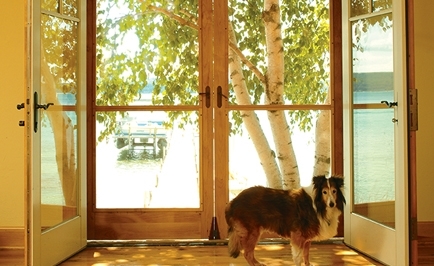 Bonnie Barnes never stayed a whole year in Provence, but she loved to go there in the springtime, returning again and again. Everything about southern France delighted her: the food, the flowers, and especially the old farmhouses with their tile roofs. “I would always say, ‘If I ever build a house, that’s what I want it to look like,'”Barnes says.

But when she was ready to cut back on travel and build a house on her Crystal Lake property, Barnes found she had another consideration. Her son-in-law, Larry Kinney, an advocate of sustainable building practices, had started Harmony Home Construction in Beulah. Believing in his mission and wanting to help family, Barnes hired Kinney as her builder. That decision proved serendipitous. Although Harmony Home generally builds contemporary-looking houses, its materials and techniques turned out to be perfectly suited to the style that Barnes was determined to emulate. Take the thick walls she was looking for. The company builds its structures with a foot-wide space between the inner and outer walls then packs the wall cavity with a clay and straw mixture adapted from an old German building technique called Leichtlehmbau—a method so tried and true that buildings constructed with it 500 years ago are still standing today. For Barnes, the technique meant achieving the deep-set windows and broad sills she loved in those centuries-old Provence homes.

Aesthetics aside, once the insulation hardens, the clay-straw layer traps heat as well or better than most of the synthetic products on the market. The house is so snug that Barnes rarely uses her in-floor radiant heating system, relying on her woodstove even when Crystal Lake freezes over. In the summer, the thick walls keep the rooms cool and also quiet, crucial since the house sits only a few yards off M-22.

Barnes was equally delighted with the Old World–style plaster that Harmony Home often uses to cover the walls. She chose a painted plaster the color and texture of butter that spread smooth over the rounded corners of her home’s arched windows and doors. The home’s exterior walls are plastered in the same earthy red pigment that she saw on buildings all over Southern France. “I wanted it to be as authentic as possible,” Barnes says.

Barnes went on to pack countless country French touches into the three-bedroom house. Salvaged, wide pine planks cover the kitchen and living room floors. In the kitchen some of the cupboards have no doors, and the tile is blue and yellow, both common Provencal touches. Outside the home, lavender-lined paths of hard-packed gravel wind around the house. Custom-made iron trellises wait to be overgrown with wisteria. Blue shutters with boards arranged in a Z pattern contrast with the rust-colored plaster. A painting of a Provencal villa hangs in Barnes’s living room. As she looks it over, she says she’s satisfied with the resemblance to her new home. In any case, with grandkids nearby, a pontoon boat moored at her dock and a cozy chair by the woodstove, this house on Crystal Lake is exactly where Barnes wants to be.

A Greener Green
Some builders who claim to be environmentally friendly are really only concerned with cutting energy bills, says Larry Kinney of Harmony Home Construction. As a sustainable builder, he takes a broader view. “When we’re sourcing building materials, we’re looking at the total life cycle of the product—how it’s put together, what wastes are produced, where it’s used in the building and, at the end of its useful life, how it is recycled,” Kinney says.

Many of the products used in traditional construction, such as insulation and dry wall, require large amounts of energy to produce and may contain chemicals that are unhealthy for workers and, ultimately, homeowners, Kinney says. His company bypasses petroleum-based products wherever possible in favor of renewable, locally produced materials—straw and clay instead of fiberglass and plastic wrap, linseed-based oils instead of polyurethane, plaster instead of dry wall. Harmony Home designs its structures with passive ventilation systems, keeping air fresh without electric-powered mechanics. Some of the materials in a sustainable building may cost more initially but they start paying for themselves right away, Kinney says. His houses have an energy rating of five-star plus, meaning their owners pay up to 60 percent less for heat and electricity.

Janet  Lively is a writer living in Traverse City. janetlively@charter.net

This story was updated for the web in April 2008.