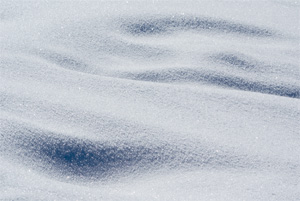 RefugeTo the subnivean!Say you’re a tiny mouse sitting atop the snow in Vanderbilt, Michigan, on February 9, 1934 – place and date of the state’s coldest recorded temperature: -51°F (not including wind chill). Wouldn’t it be nice if you could find a haven right now that is, oh, 80 degrees warmer?

Good thing that isn’t a problem. The desperately desired refuge lies right under foot, where snow and ground meet. Thanks to the remarkable insulating nature of snow, which traps the earth’s heat, with six inches or more of the white stuff, the temperature at the interface hovers around 32 degrees. This band of lifesaving warmth is called the subnivean zone, and it supports a secret society of small mammals tunneling, making dens, eating food stashes – and one another – all winter long.

Well GroundedRed SquirrelsTo find a red squirrel in winter, look under the snow, not up in a tree. The brash and hyperactive little rodents dig cozy dens in the subnivean zone, burrowing tunnels down through the snow to stashes of coniferous cones that they cut and bury throughout the late summer and fall. When a stash is exhausted, they move to another stash and den there, explains wildlife researcher Rolf Peterson of Michigan Technological University. Peterson is renowned for his work with wolves and moose on Isle Royale, but finds the subnivean zone so curious that he calls it “a hobby of mine.” Animals weighing about seven ounces or less tend to live in the subnivean zone, Peterson says, and red squirrels are the largest mammal found there.

TastyVolesThe two-ounce voles are among the subnivean zone’s most populous mammal residents and are prolific tunnel builders – their tunnels can extend for several meters, running in many directions. Voles are also responsible for leaving all of those raceways of chewed-up grass on your lawn come spring. (Mice, also populous residents of the zone, are predominantly seed eaters and are found more in the forest.) Unfortunately for voles, they are a primary food source for carnivores, and only about 10 percent of voles survive winter. One of Peterson’s colleagues calls them a “professional food source.” Look for mice and vole tracks beneath snow-covered branches, and trace them to see where they enter a subnivean tunnel.

DeadlyThe HuntersWeasels, called ermine when they turn white in winter (see photo at top), and their cousin, the American marten, sport sleek bodies that allow them to snake through snow tunnels dug by their favorite winter prey – mice, voles and red squirrels. Larger carnivores, like wolves, coyotes and foxes, listen for small mammals rustling around beneath the snow and then pounce, crashing rudely into the quiet and protective realm of the subnivean zone.

Get in the ZoneMake like a subnivean resident yourself and build a quinzee, a small snow mound shelter. Pile and pack a dome of snow about head high and 10 feet in diameter. Let it sit for an hour, then carve out the inside, leaving a wall about a foot thick. Spend the night, and you’ll be amazed how snug your subnivean retreat will be. For more detailed instructions: call-wild.com/quinzee.html.

Note: This article was originally published in February 2008.