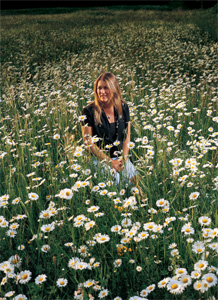 It’s not that Wendy Wagoner hates invasive species, she explains as she strips the leaves from an ox-eye daisy (an invasive) and adds it to the bunch she’s gathered. It’s just that she hates when they wipe out native plants. Which is why Wagoner helped establish the Eastern Upper Peninsula Northern Wild Plant and Seed Cooperative: to promote, propagate and protect native plants. But not just any native plants — the co-op collects and sows wild seed from natives in its region only.

Why so particular? Because the same native species in two different geographic regions — even neighboring — are genetically different, each adapted and evolved to survive and thrive in its specific area, says Wagoner. Since the co-op’s ultimate goal is to build a better ecosystem in the Eastern U.P., maintaining the genetic integrity of Eastern U.P. natives is essential. If natives thrive, the whole ecosystem will. Where does that leave the oft-reviled invasives? Wendy shrugs and smiles. "Native plants are like your liver," she says. "They clean things out."

Note:This article was first published in April 2006 and was updated for the web February 2008.