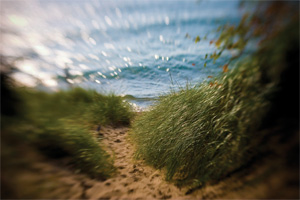 When my father met my mother 27 years ago, he describes the moment he saw her in terms of arrows, how every single one in his body suddenly pointed in one direction. I have imagined twisted metal arrows inside of a man, unwinding, straightening in unison, finding balance inside his blood. There are arrows inside of every person, compass needles that stir and shift and ultimately, often without our recognizing it, lead us in a direction.

I don’t know how old my father was the first time he picked up a fly rod, or what, specifically, made him do it, but I know at the core of it there was also an arrow with some urgency written on it. I was five years old the first time I cast a rod, standing in the North Branch of the Au Sable River with a rope tied around my waist so I wouldn’t float away in the current, my father close behind me whispering the four-count rhythm. My arrows, as small as they were, didn’t hesitate. I have since found great solace fly fishing on the Boardman River and, when life seemed especially heavy during my last year of schooling at Bennington College in southern Vermont, I would cast just for the sound of the line in the dark air, the familiar motion in my wrist, out on the lawn next to my dormitory late at night.

And then there are arrows that point a person towards certain places. There are people who crave mountains, people who can fall asleep only to the sounds of city noise, people who feel so drawn toward deserted islands they find it in themselves to sell everything they own and disappear. Their arrows point right off the map, and they follow. It’s difficult to say whether my childhood in Northern Michigan, surrounded always by water, influenced my arrows, took hold of them and made them stick, or if I just got lucky, born into a place with an overwhelming gift of water, the thing I constantly find myself seeking whenever I am away, hoping to find a piece of home there. Instinctually my body moves toward water, is pulled toward waves and pools, can sense a current stirring from incredible distances. Even in New York City where I spent several months this past winter, I would find myself suddenly disoriented, scanning the skyline for a break in the buildings, a space that might suggest a body of water, a place I could go to and restore my senses. Walking to my Brooklyn apartment at the end of each day, down 14th Street toward 4th Avenue, there was always a moment when I was sure Lake Michigan would be waiting for me on the other side of a slope in the sidewalk. When it wasn’t, the arrows always spun, spoke to me about sandy coastlines, sleeping bears, surfing the storm waves on Lake Michigan. It didn’t take long before I felt like they were addressing me as though I were a wild creature lost in the wrong habitat, a dolphin or a river nymph trying to survive in the Dead Sea.

Since I was old enough to understand water, since dipping my hand into the Boardman River’s current for the first time, I have tried to make my connection to the water tangible, tried to make sense of the pulse that quickens and then steadies when there are waves to ride, rivers to fish. Without realizing it, the way I view the world has everything to do with the reflection of the world as I see it through Northern Michigan’s waters. The presence of water has changed my interior landscape just as significantly as it changes the physical landscape it encompasses. Water begs for a person to shed layers and dive down, softens everything that it touches, quiets those arrows that otherwise tend to collide.

Jaime Delp was an intern at Traverse.dejaimien@gmail.com