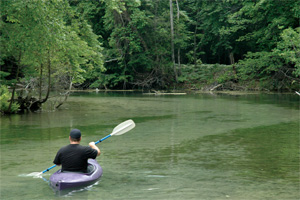 A bill introduced in the Michigan Senate that would allow the flow of many Michigan streams to be reduced by 25 percent without a permit review or any public comment has prompted a coalition of environmental groups to challenge the bill’s backers to a public debate over the issue.

The coalition opposes the bill for three main reasons, explains Grenetta Thomassey, policy director at Tip of the Mitt Watershed Council. First, a company could withdraw up to 2 million gallons a day without a permit-eight times more than what the Nestle water withdrawal plant in Mecosta draws. Second, companies would be able to reduce the flow of some streams by up to 25 percent without a permit. And third, the bill does not bring groundwater under the protection of public trust doctrine.

The bills are part of a package of bills designed to protect the Great Lakes and all of Michigan’s waters from excessive withdrawals and are necessary for the state to participate in the Great Lakes Compact—an agreement by the Great Lakes states to join in the protection of the lakes. Many people fear that the Great Lakes will see increased pressure for water withdrawal as development continues in arid portions of the United States and as water shortages grow worse in many areas of the world.