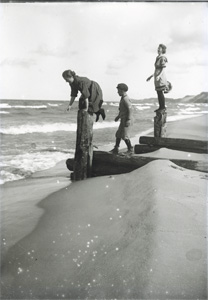 Your family may be one of the lucky dozens that’s spent a week at Watervale every summer for generations. But if it’s not, pack up the clan and start your own tradition. Cottages at this vintage vacationland nestled on the shores of Lower Herring Lake open to those without longstanding reservations in late August. Don’t want to wait? Dump the family – sunny single rooms inside the 1917-built inn become available even earlier. Room rates include breakfast and dinner. Call for cottage rates; there is a daily meal charge per cottage guest. Arcadia, 231-352-9083, watervaleinn.com

August on the Au Sable River? That’s Trico hatch time, big time. Tie up your best imitation of the wee mayfly, then book a room at Fuller’s North Branch Outing Club. Since 1916 these first-class accommodations have treated anglers from elite circles – think Henry and Edsel Ford, Harvey Firestone and European royalty – to the ultimate fishing getaway Up North. Follow in their waders’ boot prints, and you’ll be rewarded with a priceless experience that includes a homemade breakfast fit for a king. Or an auto baron. Or you. Grayling, 989-348-7951, fullersnboc.com.

So maybe you missed the boom back in 1875 when a group of Methodists hustled their bustles to build Bay View, a village of Victorian summer cottages cum seasonal religious camp. That doesn’t mean a religious experience is out of your reach. Retreat to Bay View’s Terrace Inn, a National Historic Landmark built in 1911, and you’ll have sacred space aplenty: a wide veranda dotted with rocking chairs, a lawn ready for a rousing game of croquet, and rooms resplendent in retro details but free of newfangled devils like TV’s and phones. Unlike the respite seekers a century ago, however, your summer chill time won’t depend on the shade of Bay View’s towering beeches and oaks or breezes from nearby Lake Michigan; each room at the Terrace Inn is blessed with air conditioning. 800-530-9898, theterraceinn.com.

This article was updated for the web April 2008.