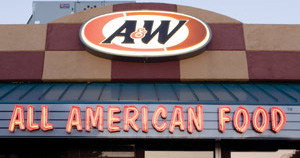 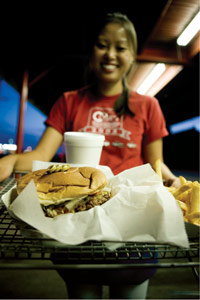 The Mighty Mac turned 50 in 2007, and what better homage to the era it was born in than to make it your portal to a juicy, fresh grilled Big C burger at the classic Clyde’s Drive-In, just west of the bridge in St. Ignace. The Clyde’s concept premiered in Sault Ste. Marie in 1949 with 19-year-old entrepreneur Clyde Van Dusen, a Michigan Tech college student with a fortune of $300, who, realizing he could only work eight hours a day at a regular job, thought maybe he could do a little better putting in longer hours working for himself.

And longer hours he had – the original Clyde’s in the Soo was open until 3 a.m. The servers were on roller skates (for a stint, anyway), and the patrons sitting outdoors could – and still can – holler out between bites of their burgers to mariners on the freighters passing through the Soo Locks. Van Dusen still owns the original Clyde’s, ordering fresh ground beef from Neville’s Superette every day to make the patties. The St. Ignace Clyde’s is one of the original Clyde’s two sisters, built in 1971 and operated by John Coveyou and his daughter Rachel. They serve up hot dogs, fried shrimp, fresh whitefish and perch, and gooey-good grilled cheese sandwiches made with Velveeta (with pride) to locals and U.P.-bound travelers fresh off the bridge. Clyde’s No. 1, 1425 Riverside Dr., Sault Ste. Marie, 906-632-2581; Clyde’s No. 2, 201 Chippewa Ave., Manistique, 906-341-6021; Clyde’s No. 3, U.S. 2, just west of the Bridge, St. Ignace, 906-643-8303. 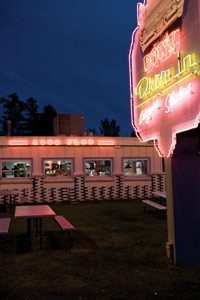 The lights of Don’s Drive-In lure people cruising along East Grand Traverse Bay and campers from the nearby 342-site Traverse City State Park. If you can snag a spot at a speaker, eat outside, but going for a window booth inside the Cherry Capital’s neon-lit 60’s icon means you can check in with stony-eyed Zelga the fortuneteller in the coin-operated booth. It’s a good day when a Don’s real-fruit malt is on your horizon, whirred with raspberries, strawberries, or – when in Rome – juicy cherries. A malt and steak-cut fries make a meal on their own, or you can roll up your sleeves for the juicy two-patty Big D burger, custom griddled and garnished as you like it. Reubens, grilled cheeses, fried fish, hot dogs and kiddie baskets that come in nifty little cardboard cars give one and all their fix. 2030 U.S. 31 North, Traverse City, 231-938-1860. 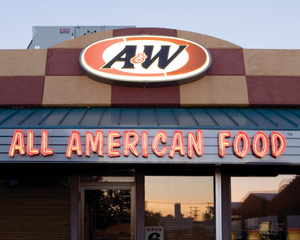 The Frankfort A&W was built in 1962 to feed the sun-kissed crowds in this Lake Michigan beach town. In the scrupulous care of the Finnish Kolehmainen family for the last 32 years, this drive-in is as sparkling, spanky clean and oh-so classic as always. Brothers Jason and Aaron Kolehmainen serve the traditional A&W menu with lots of homemade touches. There’s a full breakfast – don’t be shy to order a frosty-creamy root beer float with your biscuits and gravy, or to do so through the metal automatic speakers in the drive-in.

Teenage servers bring it on trays that hook on your window (though, sadly, the angled aerodynamics of many newfangled car windows don’t allow for it). For dinner, get your classic burgers and dogs with deep-fried accoutrements like crispy golden onion rings, corn dog nuggets, or cheese curds – all made even better by dunking in homemade ranch dressing. The daily specials are local hits: Mondays they serve a goulash dinner with coleslaw, homemade cornbread and honey butter. Wednesday is wet burrito heaven, and the Friday fish fry brings carloads from up and down the coast. Don’t miss summertime vintage car cruise nights. 21 Lake Street, Frankfort, 231-352-9021.

The Cherry Bowl beckons in the still Northern night, as it has since 1953. Mrs. Jean Griffin ran the Honor drive-in theater for decades after her husband’s 1959 death. As reported in the local paper, she operated “always with class and all in high heels.” Current owners, Laura and Harry Clark, just the theater’s second in half a century, strive to let their patrons enjoy the food as much as the flick. Where else can you find fresh hot popcorn with real melted butter?

Get hungry with a round of mini-golf before or between the double features (top releases, never rated over PG-13), then see if you can keep from getting that head-spinning, kid-in-a-candy-store feeling stepping through the screen door of the Cherry Bowl Diner. Gain focus trying to claw a stuffed animal from the coin-operated game, then pick your pleasure from hand-tossed pepperoni pizza on rotating pans, popcorn chicken in miniature popcorn boxes, fresh-made Messy Marvin’s chili cheese fries, or homemade bread sticks with butter and garlic, mozzarella, Parmesan and oregano. An army of cheery concession staff brings you whatever you point to; you dress your hotdog yourself from trays of fresh-chopped onions and pickle relish and with ketchup in an old-fashioned crank dispenser. A big broasted chicken dinner with homemade seasoned potatoes and pickles is a lip-smacking choice for a cozy tailgate supper, but if Harry made his Crazy Harry’s Barbecue Ribs, they’re not to be missed. For dessert: Dumbo’s funnel cakes, an Orange Crush slushee (with whipped cream and a cherry) or caramel apples dipped that morning. The food is all made fresh. “I know the cotton candy is ready when the staff is full and their tongues are blue,” says Harry.

You’ll find Rolaids and mosquito repellent tucked comically at the end of the wall of candy concessions – but on a perfect crisp ‘n’ starry Up North night you won’t need either. Lay back in the way-back of the car, crumbs of cinnamon sugar from the funnel cake scattered happily on the blanket under your chin and feel the tingle of clean Northern night air. And enjoy the show. 9812 Honor Hwy. (U.S. 31), Honor, 231-325-3413, cherrybowldrivein.com.

Note: This article was first published in July 2007, and was updated for the web February 2008.