The Next Cool Place 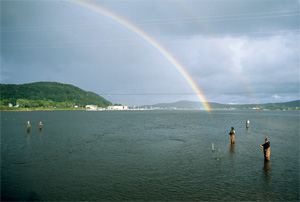 Ten years from now, where will you have wished you had put your money? Envelope please … Elberta. The tiny village on the other side of the Betsie Bay from Frankfort is in the early stages of renaissance. Elberta has been sleepy since, well, forever, and got even sleepier after 1982 when its rail yard and ferry port closed for good.

But check out changes afoot on the old industrial bay front. Already a new public park on the bay has hosted Shakespeare en plein air, the town has a thriving waterside summer farmers market, and up at The Trick Dog, a cafe and gallery, you can take in funky art – and a jaw-dropping view of Lake Michigan. Add in three working marinas (yes, there are open slips) and plenty of breathtaking Lake Michigan shoreline.

A large swath of undeveloped dunes on each side of that public beach are owned by the Sand Products Corporation; according to town clerk Sharyn Bower, the company’s future development plans, if any, are unknown.

Elberta has a municipal sewer system. Invite the houseguests. Your septic isn’t going to back up.