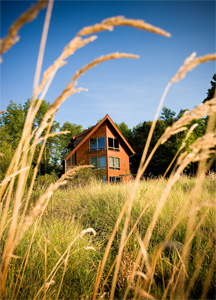 Liz Taylor and Richard Burton had the Beverly Hills Hotel’s bungalow. Frank Sinatra and Ava Gabor had the house in Palm Springs. You and your sweetie’s secret love nest? The Lake Michigan Sunset Penthouse. Just three miles south of the village of Onekama, it’s perched three stories above the Lake Michigan shore and set for holing up.

Romantic possibilities come courtesy of a king-sized bed, a heart-shaped Jacuzzi tub and an unforgettably breathtaking view — the giant, west-facing windows jut out where they meet, so it feels as though you’re standing in a ship’s prow while the waves crash below.

The pair that loves to lounge together will appreciate the cushy rocking recliners that sit side by side, cable television and a dozen DVDs and videos, a ream of books and magazines, and a well-equipped kitchen.

Don’t feel like cooking? You’re covered. On the fridge, there’s contact info for Chef Perry (231-360-2006), a private chef who comes to you, plus a drawer full of recommendations for great area restaurants. Picking up a carryout meal from the Blue Slipper Bistro, just a few miles up the road, is well worth the 10-minute jaunt from the nest (231-889-4045); the Townhall E-Z Mart on Main Street (231-889-4514) keeps a decent selection of wines — including local ones — plus beer and liquor.