The Fire Not Forgotten 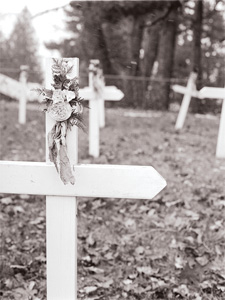 On a sticky late-September evening in 2004, after the last boaters tied up for the night in the Cheboygan County Marina, Curtis Chambers locked up his captain’s office, climbed into his jeep and drove to the old county jail. There, in the shadow of the imposing red-brick building that had housed nearly a century’s worth of town sheriffs and the rowdy lawbreakers in their custody, Chambers found the sign he had heard about.

It was your typical historical marker: big, green, gold, and to most folks who stand before it on the freshly shorn jailhouse lawn, an innocuous account of what happened where, when. It noted the structure’s former role as sheriff’s residence and jail, the scads of drunken ’jacks tossed inside to sober up during the town’s lumbering heyday, its current role as a local history museum. And then it highlighted this man:

“Cheboygan County’s two-fisted sheriff, Frederick Ming (1865–1943) was the most notorious of the nineteen lawmen who lived here. During Ming’s six years as sheriff, ‘no bully was big enough to stay out of jail if Ming decided to furnish him with room and board.’ In October 1900 Ming, his deputies, and speculator John McGinn burned Indian Village on Burt Lake in a land grab from the Indians. Ming served in both houses and founded the tuberculosis sanitarium in Gaylord.”

Chambers gritted his teeth at the sight of Ming’s name. “It sickened me,” he said. “The next day I got on the phone to the city manager, the mayor and the head of the historic society.”

Understand, Chambers isn’t a guy given to overreaction. A former Navy man, Chambers exudes the kind of precisely measured cool that can only be chiseled from rigorous self-discipline. He is tall, trim as a man half his age, with a neatly clipped salt-and-pepper mustache. He runs miles each week, attends church with his wife each Sunday, looks people straight in the eye when he speaks, and stands at rapt attention—back ramrod straight, legs wide, hands clasped—when he listens.

But Chambers is also a member of the Burt Lake Band of Indians. His great-grandmother was among those Indians on the receiving end of Sheriff Ming’s wrath. And like the other local descendants of the Indians who watched their homes go up in flames that October day in 1900, Chambers counts the burnout, as it’s come to be known, as the blackest moment in their collective history.