The Beach at the Headlands 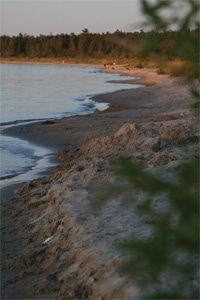 Beat summer’s heat with a sun-soaked, water-filled day on the Straits at the nearly 600-acre Emmet County oasis known as the Headlands (Emmet County Parks & Recreation, 231-436-4051).

Begin by scoring provisions in downtown Mackinaw City, where you can arm yourself with an arsenal of summertime treats, like beach toys snagged from Mackinaw Kite Co. (307 East Central Ave., 800-622-4655, mackite.com). Bring a basket and peruse the picnic offerings at Mackinaw Bakery & Coffee House (101 Langlade, 231-436-5525). With your basket brimming, follow Central Avenue a few miles west of town and turn left onto Wilderness Park Road; head south for a half-mile to the Headland’s entrance.

The Headlands were established almost a half-century ago, when, according to local lore, millionaire Roger McCormick, an heir to the International Harvester fortune, flew above this intriguing stretch of shoreline and dropped sacks of flour to mark the land he wished to purchase. Some dispute the fly-over tale, but McCormick did in fact purchase the land, and in 1996 his estate sold it to be managed as a county park.

The Headlands now allows the public to access two miles of stony Straits waterfront, and hike, bike or cross-country ski the nature trails winding through magnificent hardwood forests. Ditch your car at the entrance and foot the less-than-a-mile McCormick Lake Trail all the way to the park’s Guest House at the base of Johnson Point. The 22-person Guest House, along with the park’s 18-person Beach House, can be rented – something to keep in mind for the future.

For now, though, just concentrate on the beach stretching northward, with two arms of land circling out into Lake Michigan to create a quiet cove. Find a spot to unload, then stop to consider your good fortune; you’ve got a basketful of goodies and a beautiful beach, with the rest of the day to splurge however you wish.