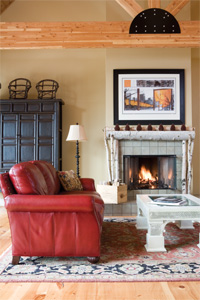 It is such a heart-pounding climb up the 222 steps that lead to Terri and Michael Lindvall’s cottage, no wonder they call it Stairway to Heaven. Catch your breath, stand on their cedar deck and take in the perfume of pines and the stunning sweep of golden sand between Lake Michigan’s Little Point Sable and Big Point Sable. It’s a piece of paradise.

Fitting, since Michael is the senior pastor of The Brick Presbyterian Church on New York’s Upper East Side, as well as a novelist and author (his latest title is The Geography of God). Given those credentials, you might even conclude that there was a bit of divine intervention at work when, after months and months of searching property listings on the Internet, this piece turned up. Not only was the land in Pentwater, where Terri had vacationed since the early 1960’s, it happened to be adjacent to her family cottage – a place where her parents, siblings, their kids and friends have gathered every summer – and atop the very hill, called Eagle Top, that she has climbed every year since she was a kid.

The property has a quirky history. It was part of a tract of 63 teeny 125-by-25-foot lots that had been given away by a Chicago bank for opening a savings account back in the 1940’s, Michael says. “You could camp on them, that’s about it. When people found out they were individually useless, a fellow down here collected them.”

The Lindvalls knew that building their house 150 feet above the road would be dicey, but they had faith that the sandy perch was a good deal. Michael, who studied architecture at the University of Michigan, sketched out an idea and took it to Pentwater architect Norm Dodds. “We kind of wanted it to look like a Michigan two-box farmhouse,” says Michael.

When the couple looked for a builder, most said it couldn’t be done. One suggested having a helicopter drop loads onto the site, which would have been prohibitively expensive. “Finally we found a builder who was tenacious enough to build on it,” says the pastor. Leonard Atkins, now retired, figured out a way to move all of the materials: via a cart connected to a generator-powered winch. All of the trusses and metalwork had to be fabricated on site.

“That delayed the project by at least six months and probably added 10 to 15 percent to the cost of construction,” says Dodds. “Other than that, it’s just like building another house. Once the materials are up there, you carry them in and go to work.”

The Lindvalls disturbed as few trees as possible on the property – both for aesthetic reasons and because the trees help shelter the home from the north winds that blow off the lake. From the front door, you can see Lake Michigan. Steps lead down to bedrooms in the cozy lower level, made snug and warm by an insulated concrete form (ICF) foundation.

The main floor is above the tree level, and a 35-foot deck spans the view side. “It was a big surprise when the house went up. I always thought that we would be in the trees up here – I didn’t know we’d be over them. Like a tree house,” says Terri.

Huge windows let in plenty of light to warm up the Michigan white pine floors and ceiling. “We kind of went with a Scandinavian color theme – bright colors,” says Michael, who grew up in Minnesota and Michigan’s Upper Peninsula. They also went eclectic, incorporating furniture from their travels to China, pieces they rescued from the trash, even a church pew from Michael’s first church in Long Island and dining room chairs from a former Manhattan funeral parlor.

The couple designed their kitchen around an 1811 Empire chest they bought for $35 early in their marriage and that their artist friend, Ann Arbor’s Mark Orr, “funked up for us,” as Michael puts it.

Peeking down from the ceiling is a beautifully carved peregrine falcon that Michael’s father, Lloyd Lindvall, made. Lloyd also built the sleek cedar-strip canoe that hangs from one of the massive beams and the snowshoes above the two-story fieldstone fireplace on the sun porch. Branches from fallen birch trees serve as railings for the bedroom lofts and set off the tiles in the living room fireplace. The walls are filled with Terri’s lively paintings.

The Up North feeling continues outside the door with natural landscaping – ferns, dune grass, poplars and pines. And those 222 steps? That heaven can wait. They’re just for exercise or emergencies now that a new lift, which takes about 4 minutes to get up the hill, is up and running.

This article was originally published in November 2007.