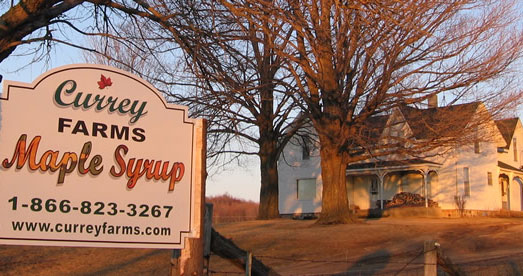 While maple syrup producers across Northern Michigan wait for enough sunny days to get this year’s sap flowing, Charlevoix’s Art and Jan Currey are reveling in their recent honor from Michigan Maple Syrup Association. Currey Farms pure maple syrup won first place for maple syrup and Best of Show for all maple product entries, including maple cream and maple candy. Over 30 Michigan maple syrup makers gathered in Clare to compete against the Curreys’ syrup, which was judged for color, flavor and density.

The Curreys have been making syrup commercially for two years on their 70-acre maple farm in Charlevoix, using methods Art, a retired large animal vet, learned from his father and grandfather.

The winning syrup was made from last spring’s sap harvest.

“My husband knew when he tasted it that there was something special about this batch,” says Jan. “The conditions were optimal. We had several days with good freeze at night, about 27 degrees, and then the temperature raised 10 degrees quickly the next morning, with blue sunny skies and no wind.”

As of March 13, the Curreys have had small sap runs from their 5,700 taps, but not enough to fire up the evaporator. “Art can’t remember a year that it is the middle of March and we haven’t made maple syrup yet,” Jan says. “It helps you to maintain respect for the fact that we’re not in control. With so many manmade things you just throw the ingredients in and it’s done. The sap flow is a natural thing. It keeps us humble.”

In addition to their Michigan honor, the just-opened Trump International Hotel & Tower Trump Hotel in Chicago has selected Currey Farms pure maple syrup to accompany their room service breakfast orders. Jan is thrilled folks on the Magnificent Mile are tasting a little Up North with their strawberry pancakes but, she says, “It’s just as important for us that for people who drive down the road to pick up a bottle here, the syrup is as special.”