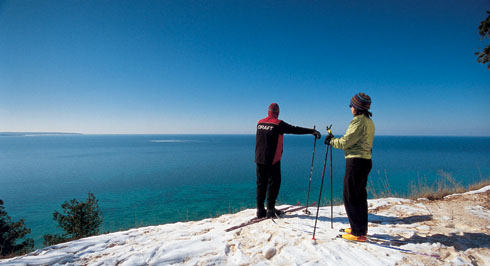 Empire, a small town of lumber-era architecture and Lake Michigan views, sits in the heart of the 35-mile-long Sleeping Bear Dunes National Lakeshore. From this Northwoods village you have easy access to all the beauty the national lakeshore has to offer. Miles of trails, fresh snow and some of the most breathtaking vistas in the Great Lakes await, so pull on your hat and gloves and head out to choose your trails.

Picking your path is not an easy decision. From its southern end near the town of Frankfort, to Good Harbor at the northern tip, the Sleeping Bay Dunes National Lakeshore is laced with trails of alluring names: Alligator Hill, Empire Bluff, Pyramid Point, The Dunes. They meander through hardwood forests, around fat fir trees and across snow-covered meadows. This glorious rolling topography owes its existence to the advance and retreat of glaciers, which geologists say rose two miles high. The historic farmsteads and perches that look out over Lake Michigan now punctuate these landscapes.

Before you hit the trails, stop by the visitors center in Empire and purchase a lakeshore pass to place in your car windshield at the trailheads (weekly passes are $10 per car; $20 buys an annual pass). Know, too, that the lakeshore doesn’t groom any of its cross-country ski trails. There’s really no need, because skiers generally keep them well tracked. If you’re uncertain about the prospect of breaking trail or icy trail conditions, exchange your skis for snowshoes. Just heed snowshoe etiquette: Stay to the side of the trail – well away from present or future ski tracks. Sleeping Bear Dunes National Lakeshore, 231-326-5134, nps.gov/slbe

Though the Sleeping Bear Dunes National Lakeshore hasn’t placed signs at the route that winds past the historic Treat farm, it still gets plenty of traffic. The relatively flat terrain on this approximately two-mile roundtrip is perfect for novice skiers, but snowshoers leave their prints here, too. So do animals – deer, rabbit, coyote and even a cougar has been sighted in these parts. It’s no wonder man and beast can’t stay away. Set in a field that’s tucked between a hardwood forest and a Lake Michigan bluff known as Old Baldy, the Treat farm is all that its name implies.

To find it, head south on M-22 1.5 miles from Empire’s blinking yellow light. Turn right on Norconk Road. The picturesque farmstead you’ll see at the first curve is the old Crouch farm, now used for National Park Service housing. The two-track into the Treat farm begins at the bend in the road, behind the gate. Park your car on the edge of Norconk Road.

Where the tree-lined lane ends you’ll find yourself at the Treat farm. Built in the 1880’s, the farmstead consists of a barn, recently refurbished by the Park Service; the white farmhouse; and assorted out buildings – including an unusual dome-shaped root cellar. Ski up the knoll, through a thicket of old apple trees and around the back of the house, and then imagine what life was like in this glorious but secluded spot.

Continue on and follow the trail across the open field to ski south along the base of Old Baldy. When you come to a stand of scrawny, half-dead poplars, begin watching for the trail’s right turn that takes you to the bluff’s edge. Once there, the wide-open horizon leads you to the brink. To the north, the Empire Bluffs drop away into the great lake and its wintry blue. Look south, and the coastline rolls from the crescent of Platte Bay all the way to Frankfort. Drink it in.

The sunsets are legendary up on Empire Bluffs, 400 feet above Lake Michigan, where trees grow nearly sideways out of the dunes. Those hardy enough to trek there in the winter see nature’s colors washed clear and bright by the cold air. Time this trail right, and you can get yourself safely down by nightfall. Anytime you go, however, Empire Bluffs has a dramatic payoff. Novice skiers will want to swap their skis for snowshoes; this 1.5 mile up-and-back trail rocks, rolls and twists.

To find the trailhead, take M-22 south from Empire’s blinking yellow light about 1.5 miles, turn right on Wilco Road and follow to the trailhead. Park and follow the trail up the bluff through the mostly hardwood forest.

On your way, try to spot the rusted, old mowing machine – a McCormick Deering No. 7 – in the woods. It’s the only remnant of the farm that once graced this hillside.

Your rest is on a bench near the top of the bluff. From here, you can look down to South Bar Lake, out at the Sleeping Bear Point and seven miles across the lake to South Manitou Island (squint to find the white-dot that is South Manitou Lighthouse on the island).

The final quarter-mile to the top is even more rolling. A sign warning you to stay on the trail to prevent sand slides (take it seriously) means you’re near trail’s end. The wind off the lake almost guarantees a face full of snow and sand – but it’s worth the look down the bare bluff and out at the magnificent view.

This 1.5 mile-loop, located off M-109 about 2 miles north of Empire, is a lovely patchwork of lakeshore landscape that culminates in a magnificent view from a glacier-formed knoll. The twisty, undulating and tree-lined trail is best suited to intermediate or better skiers, but snowshoes make it a cinch. Keep the Windy Moraine trail map handy (available at the lakeshore visitors center or at the trailhead); it offers a point-by-point interpretive tour. The map will also help you stay on the trail, which can become obscure where it wends through fields, particularly after a good snowfall. But don’t worry – you can’t stray far from civilization, or your car.

Even without the map you can’t help but notice the mammoth, century-old sugar maple located about a quarter-mile in. Take a seat on the bench and try to count the jungle of limbs. Sidle up to it and try to stretch your arms around the trunk – a feat only Paul Bunyan could handle. Rested? Up and at ’em through more woods to the top of a hill and an old farm field that looks out over the Glen Lakes. On a clear day you can see all the way to Lake Michigan’s Sleeping Bear Bay. There’s a fun geology lesson from this lofty perch: it’s easy to see that the Glen Lakes were once a bay of Lake Michigan, landlocked when the lake level fell several thousand years ago. It’s mostly downhill now – through the field, more hardwoods and a pine plantation. Where the pines end, look for the leg that leads through a field and back to the trailhead.

Not ready to call it a weekend? The Pierce Stocking Scenic Drive is a stone’s throw away, across M-109. While the entire 7.4-mile loop is best accessed by car in the summer, the leg that forks right is a sweet, several-mile out-and-back ski that leads over a covered bridge and out to an overlook of Big and Little Glen Lakes. And if you have a few more days to find a few more trails, check out the all the trails at Sleeping Bear Dunes National Lakeshore.

Looking for a bit of inspiration to strap on your skis? Sit back and enjoy.

Note: This article was first published in January 2005 and was updated for the web February 2008.