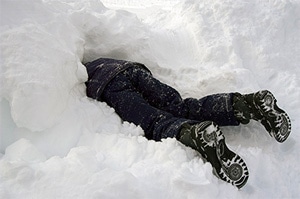 “No school today” were the greatest three words of winter. I listened with Mom and Dad every frosty evening to the weather reports on WHAK, the local AM station, then fell asleep wishing for drifts that would reach the roof of our two-story home.

Snow days meant as much to me as it did to Dad, who taught English at Rogers City High School. Instead of lecturing about dangling modifiers and Charles Dickens, he’d have to shovel the driveway, an all-morning adventure because we didn’t own that marvel of cold-weather inventions, the snowblower. But our ancient neighbor, Mr. Smolinski, did, and he sometimes relieved Dad by clearing our drive from the garage to Orchard Street after he’d stripped his own to the pavement. Once, after an extended spell outdoors, I gawked as Mr. Smolinski plodded behind his machine, an icicle of snot lolling from the tip of his frozen nose.

Living next to Mr. Smolinski was like living next to Santa Claus. The garage was his Santa workshop where he made gifts like birdhouses and garden ornaments and gimmicks like the Polish dishwasher – a towel stapled to an old extension chord. You couldn’t ask for a nicer neighbor.

Mr. Smolinski’s polar opposite was the crabstick who lived a few doors down, always yelling at kids to keep off his property. One summer, he threatened to call the police when I pulled on the beanlike thingies drooping from the lower branches of the oddball tree on his lawn.

But cranky or kind, my parents’ age or elderly, all grownups had one thing in common. They feared winter, chattering about snow as if it were a monster coming to smother us. Adults dreaded downed power lines and nights by candlelight, snowbound homes and high heating bills, not getting the mail and running out of milk and cigarettes. Even a walk to Mel’s Market at the end of the block could be like trekking through Alaska.

Winter came with warnings – parents’ preferred method of passing on their fear. “Wear your hat or you’ll get pneumonia,” and “Wear your mittens or you’ll get frostbite.” The direst warning conjured another monster, Lake Huron, the deceptively placid behemoth at which I stared from my bedroom window, watching dawn by dawn as it transformed itself from an iron-gray abyss to a frozen field of blinding white. It lurked at the shore, ever ready to swallow us in a single frigid gulp. “Stay off the ice or you’ll fall through and drown.”

Despite the warnings, I measured each season by the number of snow days. My younger brother, Greg, and I spent snow days building forts and snowmen. Or, our best pals Aaron and Joe Veselenak recruited us as mercenaries in the neighboring Lake Street gang’s snowball battles. We drew teams and fought our own Cold War from yard to yard, bundled soldiers ducking behind drifts in between volleys.

And woe to the kid who stepped in a bank deep enough to suck the snowmobile boot off of his foot. Nobody could resist a defenseless target. Hopping on one boot and waving his errant sock as if a flag of truce, his “Time out!” shrieks went unheeded as snowballs launched by both teams fell like Ping-Pong balls on Captain Kangaroo. But such was the hardship of war.

On other days, when strength in numbers twisted and bolstered the gang’s courage, we skirted danger and wandered to the margin of everything we knew – the frosty fringe of Lake Huron. We walked on the frozen waves coated in a film of sand that, when blended with a fresh dust of snow, looked like a gargantuan meringue pie. The lake tried to lure us into its maw with diamonds of sunlight trapped in a daze of ice formations – crystal caves and crannies that shattered to music when bombed with a stone first kicked free from its winter slumber on the frozen beach. It was beautiful, even to our feeble minds peppered as they were with G.I. Joe adventures and Bugs Bunny slogans, but we heeded our parents’ warning and ventured no further.

We stood at the edge of our neighborhood, at the end of our world. We’d heard of things out there beyond the horizon that we didn’t understand. Inflation and R-rated movies, checkbooks and Washington, D.C., so-and-so’s divorce and nuclear bombs. Grownup stuff that our parents talked about that was on TV after Gilligan’s Island reruns, beyond the horizon and beyond our grasp. We’d understand when we got older, they said.

Snowmen, snowball fights and walks along the edge. I’d give anything for another snow day.

This article was first published in January 2008, and was updated for the web February 2008.