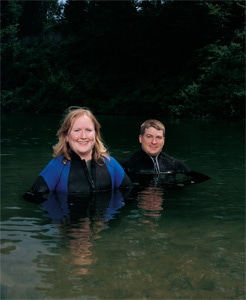 Shaynee Fanara and Sam Hunt instantly entered the realm of Up North rescue legends when they freed three men trapped in the cabin of a capsized sailboat on a blustery October day in 2004. Their mission as part of the Emmet County Dive Team: strap on full scuba gear, fin through a crazy underwater web of cables, ropes and sails — all rising and falling in six-foot Lake Michigan swells — and convince the men to leave the cabin’s air pocket and swim to safety. In a series of dramatic moments, perhaps the most dramatic came near the end, when the final man still below panicked and grabbed onto a railing, refusing to let go. Hunt bear-hugged him from the back while Farana pried his fingers from the rail.

How to keep cool in such a situation? "At first the adrenaline kicks in, but then the training takes you the rest of the way," Fanara says.

Both Hunt and Fanara are uncomfortable with the limelight that followed the rescue. "We were the first two team members at the dock, so we went, but we’re part of a team, and the whole team deserves recognition," Hunt says.

Boaters take heed. "If you are heading out on the Great Lakes, take a moment to consider what those lakes can do," Fanara says.