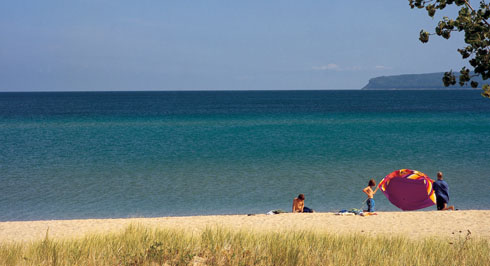 Leave the pulp fiction paperbacks to the bunnies at the Jersey Shore. Presque Isle’s 40 Mile Point Lighthouse Park is for beach lovers who want to lose themselves in the true tales of Great Lakes life.

Roll your radio’s dial to 107.3 as you roll into the park. It’ll cue up crashing waves, the wail of a harmonica and a strumming guitar — the intro to an audio tour that’ll guide you to the park’s maritime history offerings: the towering lighthouse built in 1897, the pilothouse from the S.S. Calcite and other outbuildings.

When the audio tour finishes, park and explore the lighthouse interior — free tours are Saturdays and Sundays between noon and 4 p.m. (989-785-2468, 989-734-4578 for more information). If you miss the proverbial boat, the storied remains of a real one are entrenched in the sand on the beach’s north end: the tough, ragged 150-foot sidewall of the Joseph S. Fay, one of 27 wooden ships that succumbed to Lake Huron’s wrath during a storm in October, 1905. The lighthouse keeper’s log records the events: "At 8:30 p.m. last night the steamer, J. S. Fay, came ashore here in a sinking condition. She soon broke up. Most of the crew came ashore on the Pilot House. Three men swam ashore, the mate was drowned." The entry for December 4, 1905, reads: "The assistant found a dead man on the beach about 1 mile up. We think it is the mate of the Fay."

Where better to contemplate such harrowing historical drama than before the big water — filled with hidden shoals and false bays — where so much took place? The beach is small, but its shore is a series of half-moons backed by small dunes covered in dune grass and wild grapes, so patches of private beach space aren’t hard to find. Should you crave some shade, dust off the sand and head for the forested hiking trails behind the lighthouse.