Seduced by the U.P.’s Sylvania 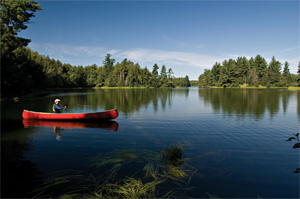 The air is buzzing with what, I’m reasonably sure, are not wood nymphs, even though the first people to own this area named it Sylvania, or land of the sylvans, in tribute to those pesky Greek goddesses of the woods. No, I’m painfully aware that these are just really, really large mosquitoes.

Still, after paddling and portaging deep into what is now the Sylvania Wilderness Area of the Ottawa National Forest near Watersmeet, you’d think I’ve earned at least a glimpse of a scantily clad mythological creature. I guess I’ll just have to settle for peace, quiet, a maze of 34 wild lakes, 18,000 acres of massive trees – and a few dozen bug bites.

My wife and I and our dog follow a winding portage trail, our footsteps muffled in the springy, buoyant duff of needles, leaves and moss. Though the sun shines, only a blush of daylight teases the forest floor beneath a nearly opaque canopy of virgin hardwoods, hemlock and pines. With each bouncing stride the pack straps and the canoe balanced on my shoulders bite deeper into my muscles.

Ahead a brilliant light shines where the trail opens at the lake edge, and we subconsciously pick up the pace, drawn to the brightness. The canoe is a carnivore on my back as we climb over blowdowns, dance around exposed roots and trudge through sucking mud to stumble, blinking, into the midmorning light at the edge of a small lake.

Sylvania is a land so wildly rich and beautiful it stopped the lumberman’s axe – not exaggerating. In the 1890’s Albert Johnston, a timber cruiser from Wisconsin, purchased 80 acres here sight unseen. Like so many others of the era, he was looking to fill his wallet by shuttling lumber to the burgeoning – and frequently burning – cities to the south.

But when he first gazed across the land, probably while ankle-deep in sand on the shore of the shockingly clear and spring-fed Clark Lake, he changed his plan. What the new owner found is very close to what we’re seeing on our trip: dazzling blue lakes alive with bass and ringed with massive trees, sandy beaches and mystical bogs and wetlands. Rather than be clear-cut and left to burn like much of the rest of the Northwoods, this land would become Johnston’s home and a sporting paradise for a group of wealthy friends.

The market-minded man of the woods must have had a soft spot for the literary classics, because he not only dubbed the land Sylvania, but also called the area where he built a log home on Clark Lake “Trossachs,” for a scenic area of highland Scotland celebrated in the poem “Lady of the Lake” by Robert Burns.