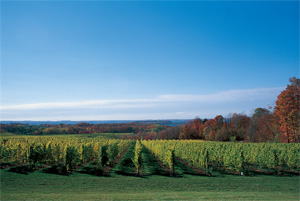 Standing on the highest point of Old Mission Peninsula, an undulating vision lies before you – a landscape of aqua, ochre, chocolate, windswept gray and shades of red, orange and green. Be it known that this dramatic place is where Northern Michigan’s Riesling began. The place where everyone said it couldn’t happen, and Ed O’Keefe proved everybody wrong.

It is here, midway up the peninsula along the fabled 45th parallel, where O’Keefe planted his first European vines, among them Riesling – often called “the noblest grape” and certainly the champion grape of Northern Michigan. He brought his purebred stock back from Germany in 1974, when naysayers said hybrids were the only type of grapes that could survive Michigan’s harsh winters.

But O’Keefe is proud to be known as a lifelong maverick, the “Ayatollah of Riesling,” he jokes. He pushed ahead, eventually planting 55 acres above this striking panorama – Lake Michigan lapping at both sides of the peninsula and Power Island rising to the west. And those acres have borne fruit for his winery, Chateau Grand Traverse, for more than three decades. It was a long struggle – the risky finances, the tumultuous weather, the public doubts. O’Keefe’s true vindication is in the taste of the wine, but production numbers provide testament, too: the winery has gone from producing 7,000 cases in 1985 to 50,000 cases this year.

Reflecting on his decision to brave the elements, O’Keefe says, “When vines have to struggle, generally the wine quality’s going to be better. It’s like anything else: survival of the fittest.”His crop is proving to be less iffy and more profitable than cherries, and has brought an entirely new kind of tourist to Northern Michigan – more affluent, more interested in the environment and the arts, including the culinary variety.

Ed’s sons, Eddie, 43, and Sean, 35, form the family business triumvirate. Sean runs the vineyards; Eddie, the business end. He sees the Grand Traverse region as a sort of pre-corporatized Napa Valley. “It’s all in its infancy. It still has its charm. Not commercialized. Just individual families and small investors in various wineries who have been successful in whatever they did previously in their lives and got into this by choice,” says Eddie.

The senior Ed fits that same profile. He was a product of Philadelphia’s Irish ghetto, and his prowess in gymnastics earned him scholarships and, later, the top fitness designation as a paratrooper for the U.S. Army’s Green Berets. He went to law school, became an attorney, then an undercover narcotics agent for the FBI in New York City. He went into the insurance biz, moved to Michigan, built nursing homes around the country, sold them to a national corporation in the 70’s and ended up on the Old Mission Peninsula.

“Everything he’s done has been a challenge in his life,” says son Eddie. So when somebody says you can’t grow Riesling grapes in Northern Michigan, he’s not going to accept that. He’s going to prove them otherwise.

So what is it about Old Mission and Leelanau, the North’s two premier wine-growing peninsulas, that makes them so right for Rieslings? “They say in winemaking the grapes like to grow where people like to live,” Eddie O’Keefe explains. “In the Northern Hemisphere, you want to be high overlooking water.”Elevation is important because it allows for good air drainage – a way for cold air to flow down and out of the vineyard to thwart severe frost. A southwest exposure is also a key element.

But the most critical thing is the water that surrounds the area. The glaciers carved deep basins for the waters of Grand Traverse Bay. On the west side of Power Island, the bay bottom plummets to more than 400 feet deep, and in East Bay it’s over 600 feet deep. That volume of water creates a thermal sink that moderates the temperatures – a source of warmth in the winter, a source of cool in the summer. The ever-churning lake-effect snow machine helps, too, dumping tons of white insulation around the vines. Spring temperatures stay low longer, keeping the vines dormant and retarding early budding. April and May are the most critical months, when frost can wipe out bloom and new growth.

“Then when summer comes it’s like flipping on the switch,” Eddie says. “It stays warm and temperate all the way through October, early November – still quite green and temperate. You add it up, and it’s rather magical out this way.”

Magic also comes up when talking with Bryan Ulbrich, the international gold medalist winemaker at neighboring Peninsula Cellars, when he describes how Riesling grapes turn into wine. “They take on so much of the landscape. Everything that makes Northern Michigan beautiful makes it a great grape-growing region. The summers, the sand, the water, the winters – nobody else has Rieslings that taste like ours. That’s the beauty of it.”

He describes Riesling’s flavor as elegant, an aromatic blend of floral, citrus, tropical fruits and stone fruits like peaches and apricots. “Grapes are really unique – when they react to yeast, they give off aromas that are reflective of other fruits.”

This ancient grape variety also ages perfectly, he says, because its acid preserves the wine and keeps it from oxidizing in a destructive way, yet the wine maintains its backbone and chemistry. He calls it a patina, like an aging piece of fine furniture. “I’ve had Rieslings from the late 60’s that are unbelievable. Nothing like when they were young, but something that only time can give you.”

Madeline Triffon, master sommelier and director of wine for the Detroit-based Matt Prentice Restaurant Group, agrees with Ulbrich. “Most whites you want to drink within a relatively short window, but I’ve had older Rieslings from Germany that were over 10 years that were great.”

People have a funny idea about Rieslings, Triffon says: “That they’re always very sweet, like they’re training wheels that you would graduate from to something drier, more sophisticated. But the grape variety, be it in Adelade, Australia, or in Germany, Michigan or Canada, is A-plus-class potential – world-class wine by anybody’s measure.”

She tries to educate her clientele about Riesling’s versatility. “People should be cognizant of the fact that there’s both a dry and a fruity style, and they’re in my opinion some of the most food-friendly wines in the world.” Semi-dry does well with hot and spicy cuisines like Thai and Indian.

Triffon lauds Michigan’s wineries for the progress they’re making and the fact that they’re not resting on their laurels from the many awards they’ve won recently. So does Sandra Silfven, longtime Detroit News wine columnist and judge of many wine competitions.

“Michigan Rieslings used to be soft, flabby and sweet. Today they represent the new Michigan wine scene,” Silfven says. She explains that new techniques in the vineyards and winemaking facilities, such as pulling leaves to expose the fruit to the sun and enhance ripening, and crushing whole clusters to create a much firmer acidity, more layers of flavor, more depth, good mid-palate oomph and a strong finish, often with a stony mineral note.

“They’re wines that everybody can like,” Silfven says, “elegant enough that a wine connoisseur is going to be impressed and fruity enough that the novice drinker is going to say, oh, this is really refreshing.”

The wines are getting so much national attention because they impart the same depth of flavor associated with cold climates like New Zealand. “I think what we don’t realize is people on the outside of Michigan are curious about Michigan wines and hold them in very high esteem. Sometimes in our own backyard we think we have to drink California or French, when people in other states are dying to get their hands on our wines.”

Many Northern Michigan winemakers are moving toward small-batch boutique wines. Ulbrich at Peninsula Cellars, who also creates wines for Gill’s Pier and at Bowers Harbor, has just launched his own label.

“It’s a project. Not a wine built for big distribution – it’s for wine geeks, people who love Riesling. I won’t call it a reserve. This one’s not going to be stuffy. It’s called Left Foot Charley.”

That was his childhood nickname. “I would move very quickly, and that left foot would snare me up. My parents thought it was hysterical. I was a clumsy little kid, so they called me Left Foot Charlie.”He describes his Riesling project as something that’s a little outside of the box – no tasting room, working directly with restaurants and retailers and, as long as possible, doing mail order.

Chateau Grand Traverse is also on the small-batch mission, having invested in new tanks for the new wines. “Sean O’Keefe has done incredible things,” says Silfven. “Their late-harvest Riesling, which was always and will always be their best, is even better than it used to be.”

The boutique projects show that Northern Michigan’s wineries are working hard to get the best wine out of what they can grow, says Silfven. She also mentions Ulbrich’s sensational top prize two years ago in the Eastern International Wine competition and the recent achievement of Old Mission’s Brys Estate, whose Rieslings won silver and bronze medals competing with more than a thousand wineries at this year’s San Francisco International Wine Competition (2004 Semi-Sweet Riesling, silver, 2004 Off-Dry Riesling, bronze) as further proof that the region’s wines are basking in the light. (The accolades keep coming – see page 93 for more about Northern Michigan’s newest internationally award-winning wines.)

And all over Northern Michigan, fine restaurants are serving local Rieslings with the same kind of gusto. That delights winemakers like Bryan Ulbrich.

“I think Americans in general are beginning to appreciate regionalism,” he says. People are starting to appreciate local flavor, and Northern Michigan has nothing if not local flavor.” And Riesling and winemaking overall, he says, “are great additions to everything that’s happening here.”

Bryan Ulbrich has since left Peninsula Cellars to start his own winery, Left Foot Charley’s.