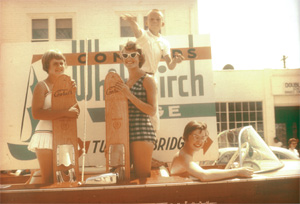 Any Northern lakefront lodge that’s stayed strong for half a century is bound to have its fair share of traditions. Every Thursday at Elk Rapids’ 50-year-old White Birch Lodge, one particular tradition is still kicking—and splashing, slaloming, flipping and generally rocking to the applause of guests who have been anticipating this wild water show all week (or all year, in some cases). As the 20-something grandson of White Birch’s founder, Mike Conrad is responsible for helping carry on the custom of the lodge’s legendary water shows. In 2007, we got Conrad to dish on the acrobatic antics; the lodge celebrates its half-century anniversary in summer 2008:

What happens at these water shows?Everything from slalom water skiing to wakeboarding to pyramids. The wakeboarders do some impressive inversions. Sometimes we have guest appearances from Mickey Mouse and Minnie. There’s music and dancing and beach acts—one year there was sumo wrestling.

Sumo wrestling?We have a lot of costumes.

How did this tradition get started?My granddad loved water skiing, so water skiing was always part of the resort. The original show was kind of modeled after the old ski shows at Cypress Gardens. It was a cool way to inspire the guests to try new stuff.

Has the show changed at all over the years?It’s definitely gotten more sophisticated. It used to just be water acts. Now we have a fully coordinated sound track and acts that come from the beach and from all different directions. The shows are different every year; at the beginning of each summer, we sit down with the staff and have a big brainstorming session to design the show for that year. It’s evolved into quite a production.

Who does the performing?The entire staff, plus a few guests—usually between 25 and 30 people. We’ve always had a young staff. Everyone knows how to water ski and wakeboard. They usually take the initiative to come up with the stunts, while my sister [Lauren] and I come up with the theme. Lauren’s the M.C.; I do a lot of water skiing and wakeboarding. Sometimes I’ll do the pyramid if we have a guy down.

Tell us more about the pyramid.It’s a two-story pyramid. We teach our staff how to do it every year. We almost have tryouts for it, because there’ll be a lot of girls that want to do the climbing; we try to pick the ones who are best suited for it. We teach people onshore and then go out and try it on the water. It can be pretty dangerous as you can imagine—the guys on the bottom have to ski with one hand on the handle while girls climb all over them at 25 miles an hour. We have to take it real seriously.

Craziest stunt you’ve ever seen in the show?We’ve had a lot of crazy stunts. Like elbow-skiing—where you hold onto the rope with your hands, ski on your elbows and drag your body along the water.

Any other stunts you’d like to share?One year, one kid tried to water ski on a ladder.

And how did that go?It didn’t work out so well. It was pretty funny, though.

Anyone ever get injured doing a kooky trick?We’ve never had anything serious happen. We’re really good at running the program; we have a pretty set-in-stone regimen for water safety here. It’s very safe, despite all the possible dangers. But we do pay a lot for insurance.

Note: This article was first published in August 2007 and was updated for the web February 2008.