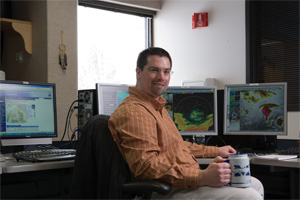 Boguth, who has a master’s degree in atmospheric science from the University of Michigan and is a meteorologist with the National Weather Service post in Gaylord, says most folks don’t blame him when their golf game is rained out or for a cloudy day at the beach. Here’s what he had to say about forecasting our fickle Up North weather.

There’s that old saying, April showers bring May flowers. Is April the rainiest month?No, June or May are probably the rainiest. What we do have in April is the melting snowpack and showers that moisten the ground for the upcoming growing season.

Always been interested in weather?As long as I can remember. Most people in meteorology have always had a lifelong passion for weather. It’s not a field where someone says one day, "Oh, I guess I’ll be a meteorologist."

Who gets your forecasts?Forecasts are free for everyone on the web site (crh.noaa.gov/apx). We also forecast for the three area airports, Traverse City, Alpena, and Pellston.

Why is the National Weather Service office in Gaylord?Offices are picked on radar coverage. Radar can only cover so far and each office has Doppler radar. The NWS puts offices where they intersect with other radar such as Grand Rapids and Detroit to the south and the Upper Peninsula to the north. Also, Gaylord is one of the highest points in Northern Michigan.

Is it staffed 24/7?There are always at least two people here – that’s what you need in case anything comes up.

Do the meteorologists in your office ever disagree?Each person has his own forecasting philosophy, but I wouldn’t say we disagree. One guy does the short term and the other does the long term.

Your biggest challenge in forecasting the weather?The biggest concern of all meteorologists is severe weather in summer and for me, it’s dealing with lake effect snow – a never-ending battle. In winter, there is more chance to warn people about severe snowstorms, but summer storms are quick, and pinning down where a storm might strike in summer is more stressful.

On technology:Nowadays we rely on computers to do almost all forecasting. We look at data models, radar imagery, and put forecasts together. Weather is almost all computer based, but we still go outside to see what is happening now. There is something called pattern recognition that is based on our thoughts and observation. It’s when we’ve seen a similar pattern in the past even though it is contrary to what the computer model shows.

How is your work different than a TV meteorologist?Only the National Weather Service can issue severe weather or storm warnings. Television stations have no authority to do that, but we do rely on them to relay information on warnings to the public.

Would you like to be on TV?I was on TV for a short time in the Flint/Saginaw area. I didn’t mind it, but a job with the National Weather Service is the job I always wanted.