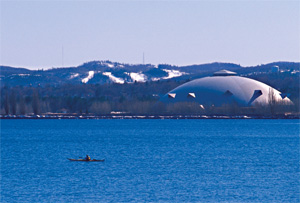 Ever wanted to slide down a giant toilet, through the plumbing, into a septic tank, through a drain field and under the surface of a pond aquifer? You – or at least your kids – can at Marquette’s Upper Peninsula Children’s Museum (123 W. Baraga, 906-226-3911). Envious adults, don’t despair; Marquette’s full of adventure for you, too.

On U.S. 41 across from the Michigan Welcome Center (2201 U.S. 41 South, 906-249-9066), you can see the eroded rocky roots of a two-billion-year-old mountain range that scientists suspect stood taller than the Himalayas do today. Ogle it, then climb the 1,450 square-foot Boreal Boulder climbing wall at Northern Michigan University’s Sports Complex (1401 Presque Isle, Room 126, 906-227-2519) While you’re there, rent cross-country skis or snowshoes, then head to Presque Isle Park (follow Lakeshore Drive north from downtown). You’re in for awesome vistas and three miles of trails on a peninsula that juts out so far into Lake Superior locals call it “the island.”

If you’re craving an indoor escape, the grand and gargantuan Peter White Library (217 N. Front, 906-228-9510), home to books, wingback chairs set before fireplaces and the on-site Tu Kaluthia (the little cookie cafe) – is a must. True Yooper opportunity comes by way of the Women’s Center (1310 S. Front, 906-225-1346) where come-one, come-all Bingo games play six nights a week at 6:45 p.m. Short a couple vowels? The jackpot’s still in reach at The Landmark Inn (230 N. Front, 906-228-2580). Sure scores: from Capers restaurant downstairs, a plate of hot tapas – the herb-seared tuna with spicy mango puree and chive oil is priceless; then upstairs at the window-walled Northstar Lounge, a drink by the fireside and a million-dollar view of Lake Superior.

Note: This article was originally published in January 2007 and was updated for the web February 2008.