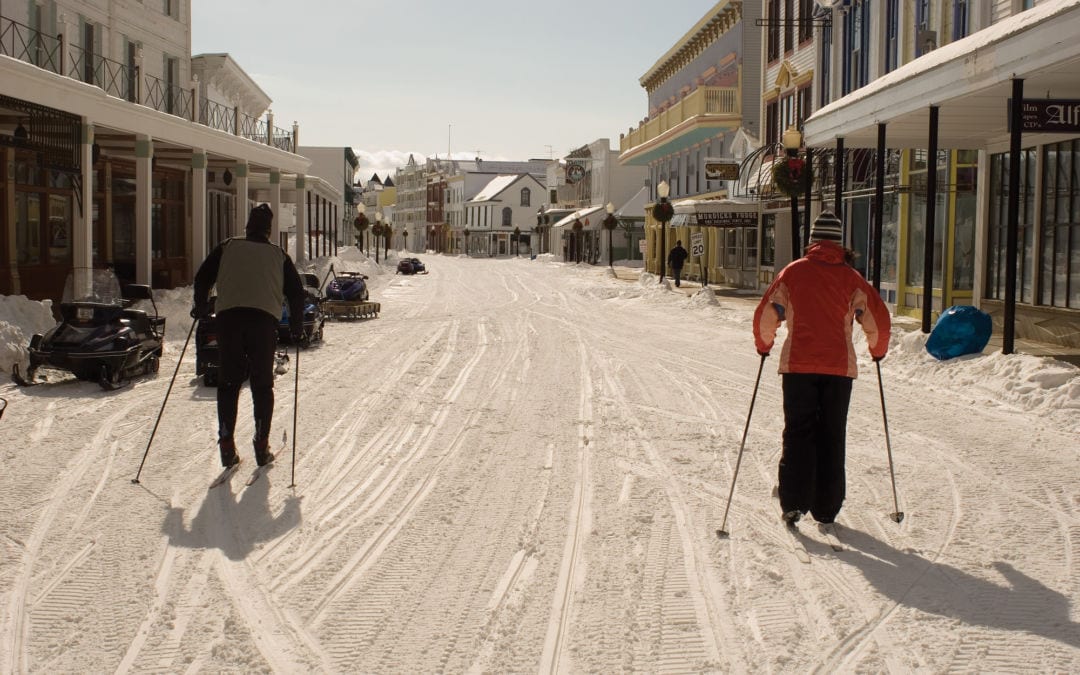 Inside my mini manor at the start of my Mackinac Island ski getaway, I find exactly what I’ve come to expect from Mackinac Island: a sweet escape swathed in floral wallpaper and cotton-candy pink paint, a breath-taking bedroom window view – I can see the Mighty Mac stretching across the Straits – and, on the fireplace mantel, a framed glossy of Jane Seymour, costar of Somewhere in Time, the cult romance classic filmed on the island in 1980.

But outside my door is Mackinac like I’ve never seen it before. It’s tucked under a frothy blanket of snow and hushed as a still life. I clip into my skinny skis, slide off the porch and swoosh into the sugar. Save for the prints of horse hooves I cross at the property’s gate, the island appears empty of anyone but me.

A cross-country skier couldn’t ask for a better setting than Mackinac in winter. There are no cars. Few tourists. The sky is blue more often than gray, thanks to Straits winds that make it hard for clouds to hang on above the tiny island. And until the surrounding waters freeze over, the number of snowmobiles buzzing around is limited to the handful of year-round island residents.

Although 80 percent of the 4.4-square-mile island is undeveloped and as wild as it was when President Andrew Johnson named it America’s second national park in 1875, I can’t resist cruising to a spot that’s been a showcase of civilization for the last century: the Grand Hotel. I approach from the west, first dipping into Hubbard’s Annex to gape in awe at the cluster of buttoned-up summer cottages the size of castles, then veer over to West Bluff Road. It’s a steep chute of a throughway, stretched along the top of a cliff that, to my right, falls away to a ribbon of road and shoreline, and to my left is fringed with gingerbread cottages so dolled up with trim and confectionery pastels they resemble a row of wedding cakes. I shove off, sail down and spill out at the base of the Grand.

The rows of rocking chairs and red geraniums that line the self-proclaimed world’s longest porch are gone, but the porch ceiling persists in its milky Mackinac Island blue. The hue is chosen because it simulates the summer sky – key to keeping predator-fearing barn swallows from nesting.

Halfway down the sloped road out front, I make a quick detour into the woods where the hotel’s greenhouses hide, emerging at the Grand’s immense front yard. The usually green grounds, named one of the nation’s “Top Ten Lawns with a View” in 2003, now sparkle pure white. Irresistible. I zigzag tracks on its untouched tundra until I hear the lunchtime signal: the firehouse’s daily noon siren – and the cacophony of island dogs that howl along.

Downtown, the Victorian-style storefronts and fudge shops are dark; the cobblestone streets, now covered in snow, are vacant except for a few parked snowmobiles and my first human sighting, a fleece-bundled local pulling groceries on a red plastic sled. As per the season, lunch options are limited. I chose the Village Inn. Outside, it offers a ski rack; inside, an atmosphere heavy on warm yellow lights, wood trim and waitresses bearing hot toddies.

Over a maple plank of whitefish caught in Lake Superior that morning, I learn quickly that locals – busy with open-till-close card games and bar-side chatter – will leave you alone if you let them. But be warned: If you inquire about trails in a winter town of 500, chances are good you’re asking a member of the Mackinac Island Ski Club, an exceptionally amiable and impassioned gang of skinny skiers who, come blizzard or shine, devote their pre-dawn hours to grooming the island’s trails to perfection.

I get not only suggestions and directions but also an offer for a group escort. As we slap our skis flat on the street and step on, my guides tell me we’ll start under the drooping white cedars on South Trail and head east for Arch Rock – the gateway, legend says, to Gitchie Manitow, great and good spirit, the Chief of all Indians.

We’ll loop about the woods, scout for island wildlife, then we’ll ski Rifle Ridge’s undulating hillocks back to town. If I’ve got the guts at the end of the day, we’ll careen down Garrison Road and Truscott Streets, precipitous mountain paths cleverly disguised as a pair of distinguished manor-lined lanes.

I pick up my pace, eager to see what lies ahead. I’ve seen it all before, of course, in summer – when the winds are warm, the grass is green and the streets are crowded. But never, ever like this.