For years on their Torch Lake vacations, Dave and Jennie Schultz had admired a stone Depression Era structure just down the road from where they stayed. Although they didn’t know much about the seven-bedroom house, they snapped it up – along with an adjacent guest cottage – as soon as it went on the market in 1987. 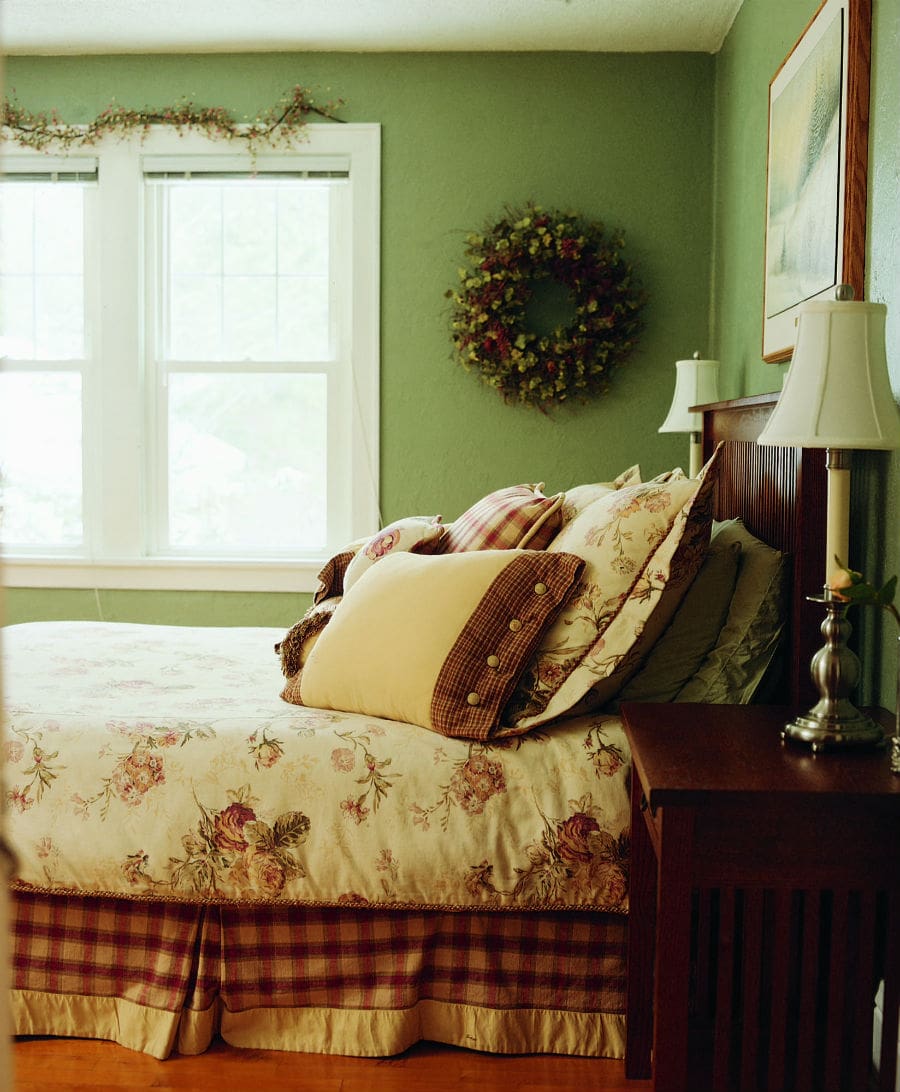 The Schultzes knew that they were in for a home improvement challenge. Neighbors had told them that the seller, a single gentleman, had touched virtually nothing in 20 years. Stepping into the big house was like traveling to the days before he owned it, when the building known as The Michigonian was a popular tourist resort.

Metal numbers still hung on the bedroom doors. The rooms had original light fixtures and vintage furniture. A large set of dishes, for inn guests, was stored in the basement along with a sign advertising the resort. Chests of drawers held other treasures: old stationery and little gold tags that read “Souvenir of The Michigonian.” 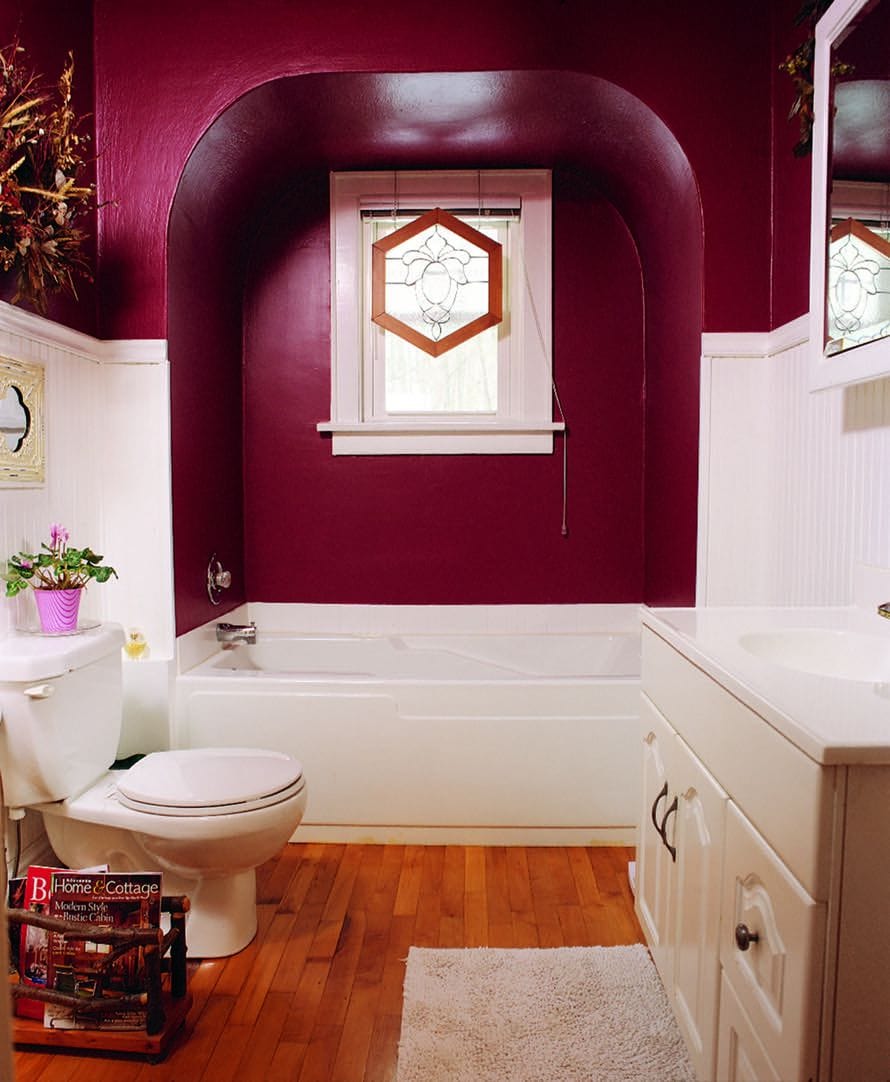 Jennie was determined to learn more of the resort’s history, so she looked up Mrs. W.T. Stevens, who had built the place with her husband in 1936. Mrs. Stevens, then in her 90’s and living on her own in Mancelona, was happy to tell her story and accepted an invitation to visit her former home. But by the time she made it, the Schultzes had completed a big remodeling project, doubling the size of the tiny kitchen by expanding into what had been a workroom and opening the wall to the dining area.

Mrs. Stevens approved of the changes. Her memories of maneuvering about the cramped kitchen cooking three meals a day for as many as 20 guests were not necessarily fond. “When she walked in the door, she said, ‘All I can think of is work,'” Jennie recalls. 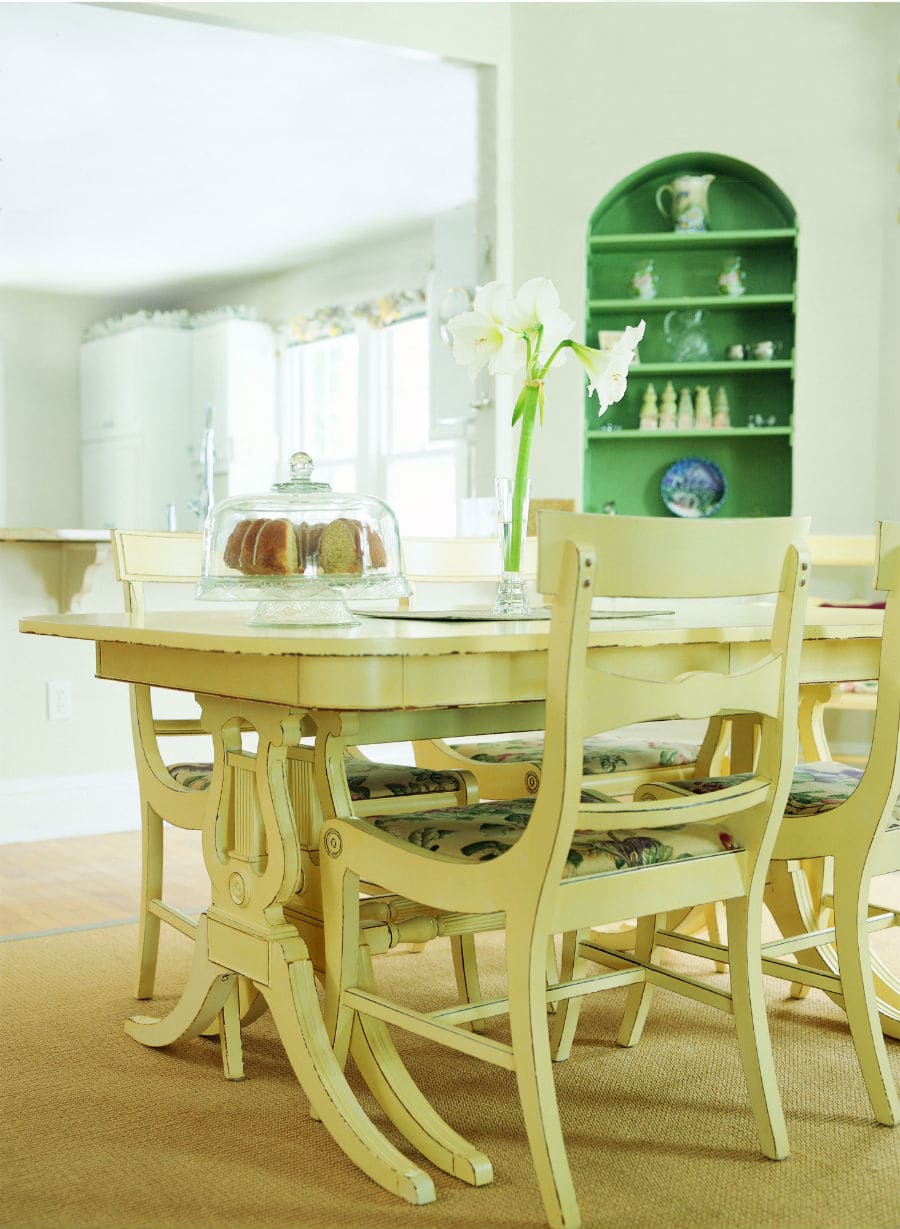 Reopening The Michigonian as a bed and breakfast didn’t interest the Schultzes. Dave’s consulting business took them away for long periods, and when they were home, they were busy working on the house. Dave, a talented woodworker with a professional-grade shop, did much of the work himself, including refinishing the wood floors and converting the basement garage into a family room.

The earliest round of projects involved winterizing. Although the 18-inch-thick walls provide excellent insulation, “you could see your breath” the first winter they lived there because the original windows and door were so leaky, Jennie says. Most of the old windows were standard-sized and could be swapped for off-the-shelf replacements. But the windows for the lakeside porch, which had had only screens, needed to be custom-made to fit inside the openings in the unforgiving stone walls. 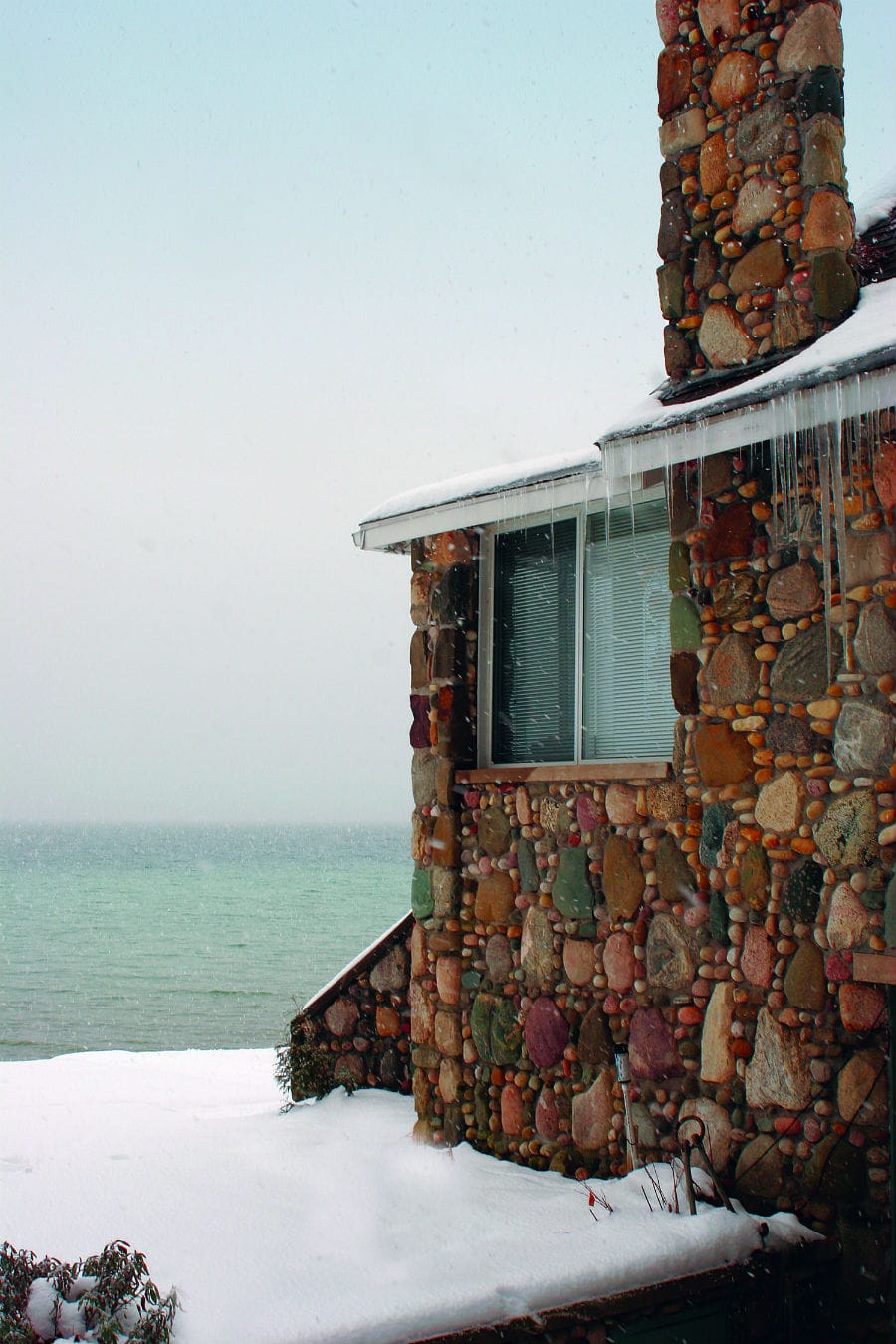 The Michigonian is one of a half-dozen structures around Torch Lake built with walls displaying the “hens and chicks” pattern – flat stones as large as three feet across surrounded by much smaller rocks. Stone houses were popular in the area because of the abundance of colorful rock on the ground. Williamsburg mason Pat Coy replaced some stone on the roadside entrance and repaired the lakefront steps. Other than that, the walls of the old inn are so solid they haven’t been patched in 70 years. Coy says they’re due for attention now, but with a little mortar they’ll stand firm another 50 years.

The old fuel-oil furnace also had to be replaced, and the Schultzes chose hot water heat, in large part because it was less invasive than a forced-air, ductwork system. They determined from the start to preserve as much of the original plaster walls as possible. Even though they hired a contractor to remove several interior walls and open up the main floor, the Schultzes were careful to keep the plaster-covered arches that characterize 1930’s design. 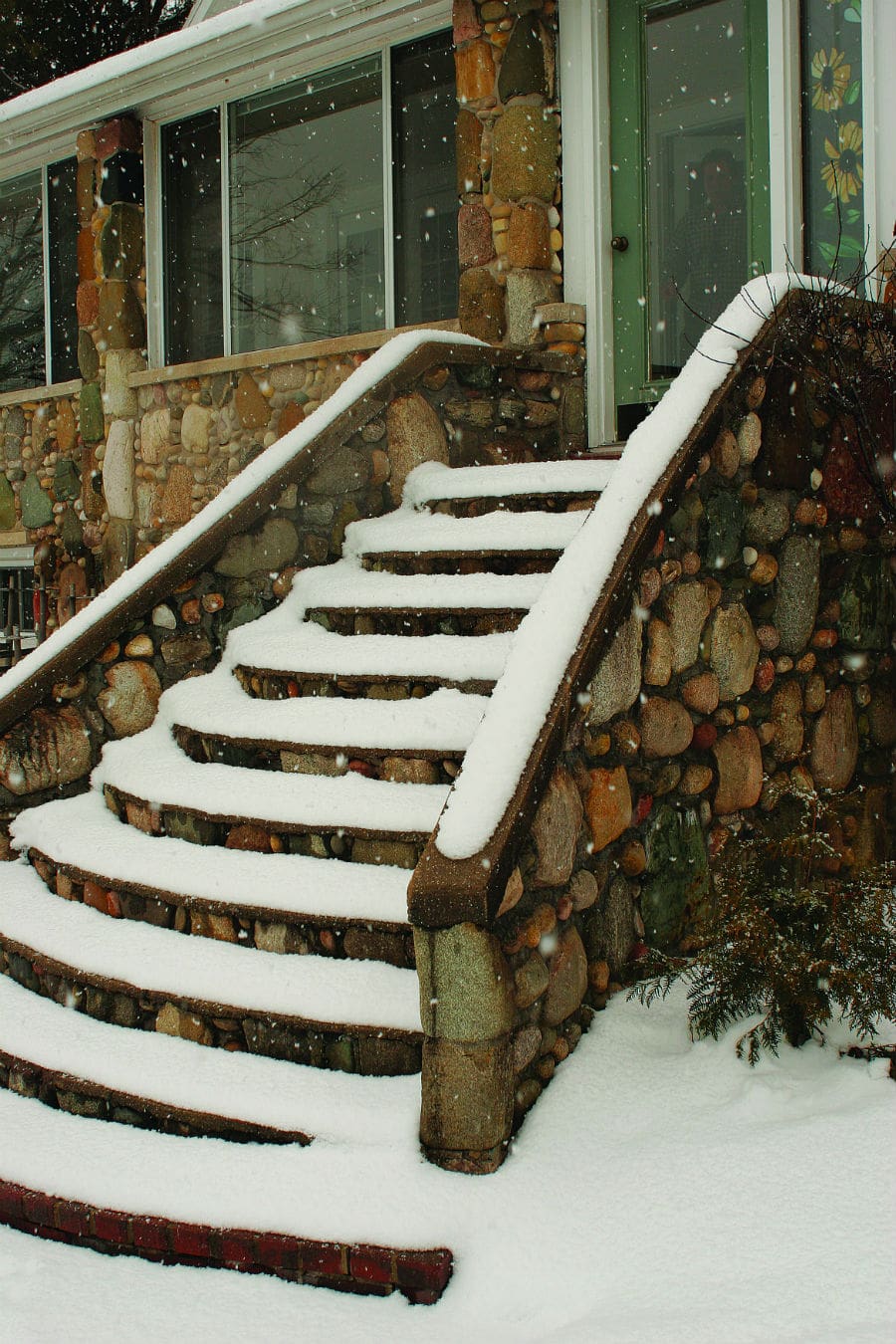 Now retired, the couple is well settled into life in the stone house, running their own maple syrup operation in the winter and entertaining so much company in the summer that Jennie jokes that she’s gained a new appreciation for the hardworking Mrs. Stevens.Mrs. Stevens died some years ago, but the Schultzes have since befriended her daughter, Diane Thompson of Beulah. On one of her visits, Thompson brought a keepsake that she felt belonged back in the house – the shiny percolator that Mrs. Stevens regularly used to serve her guests. Jennie keeps the coffee pot on display. “It’s part of the history here,” she says.

Janet Lively is a contributor to Northern Home & Cottage.jslively@peoplepc.com

Note: This article was first published in January 2007 and was updated for the web February 2008.