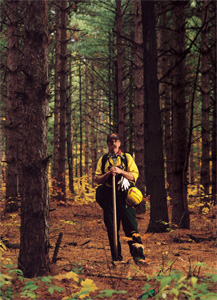 When fire broke out in a remote area of the Sleeping Bear Dunes National Lakeshore last spring, lakeshore officials called in their secret weapon: Kevin Kelly. During his 15 years as a federal Wildland Firefighter, the 52-year-old has faced off against some of the country’s most wicked infernos in rugged outposts like Montana’s Bob Marshall Wilderness and the Tiller Complex in Oregon.

Kelly, the lakeshore’s sign painter when he’s not fighting fires, even assisted in the search and salvage operation following the Columbia space shuttle explosion. When fire broke out in his own park Kelly suited up to fight it before you could say licked, strapping on a 20-pound pack, a 50-pound water bladder and grabbing his trusty Pulaski — a tool for digging and chopping — and led a small squadron on what he calls a direct attack on the fire.

"We ran up the hill and started stomping on flames," he says. In three hours Kelly’s crew had the 7-acre fire, which turned out to be one of the biggest the lakeshore has ever seen, contained.

That blaze proved the beginning of a long, hard season. In August Kelly was sent to Hell’s Canyon, Idaho, where fighting a massive fire meant daily hikes into the canyon and back. After two weeks out West, Kelly and a group of other firefighters were waiting for flights home at a layover in Minneapolis when they tuned into the first television they’d seen in days and heard about hurricane Katrina. "We turned to each other and said, "Uh-oh. I think I know where we’re going next, " says Kelly. And they were right.

Bob Butz is a freelancer living in Traverse City, Michigan.