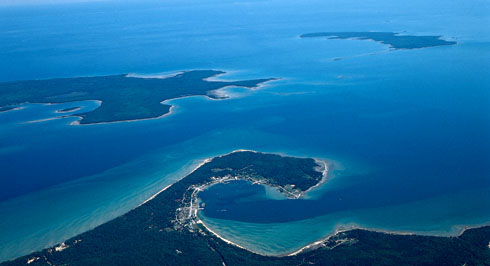 Finding Jesus is a term that comes to mind as fat, dark waves slip around my kayak like the backs of whales, and the horizon is swallowed in a reckoning-day shade of gray. I’m just off the coast of Beaver Island on my first open water kayak trip, paddling the same Lake Michigan waters that the Slovenian missionary Father Frederic Baraga traversed in a birch bark canoe in the spring of 1832. The priest was on a mission to Beaver — a 50-square-mile glacial heap covered in dunes and forest and set in the upper reaches of Lake Michigan. On May 11 of that year, Baraga baptized 22 Native American converts, and Christianity was sown on this archipelago that includes Beaver and its nine smaller outer islands.

Floating here, cradled in the two miles of water between Beaver and the smaller Garden Island, I wonder if the heavens cracked open in neon bolts as the Father paddled away after the ceremony. We’ll never know. But there is no doubt that Baraga’s conquest of souls deeply agitated the ancient tribal cosmos of these islands. When he returned the following spring he found the bark chapel he had built had been burned, and his converted flock was so harassed by the rest of their tribe that they eventually moved to the mainland.

Even so, it was as if Baraga had forced a crack into the archipelago’s cosmos. Over the next 95 years, these obscure, isolated islands would witness a bizarre lineup of religious experiments led by charismatic leaders searching for a place to preach their gospels without outside interference. In the name of religion these rough, beautiful islands would witness polygamists, celibates and men who took wives but had no sex with them, plus vegetarians, two kings and one queen, a temple, a number of churches and one reported house of virgins. And all the while, the drums of the ancient native religion beat on.

I’ve been to Beaver, the only inhabited of these islands, a number of times. In 1991, I visited Garden, then two summers ago I went back to Garden and on to explore High Island and Squaw Island, both times by charter boat. But a kayak is the best vessel for navigating the shoals around Hog Island, the last of the four largest islands I’ve yet to see. It also puts me closer to the water — an approximation of what it might have been like to be a priest with doubtful swimming skills and wearing heavy robes, alone on this water but for his Native American guides and his God. Or a 19th-century woman without lifejackets for herself or her children, following a husband she desperately hoped was following God.

Thirty miles into Lake Michigan the wind is fickle and powerful. It whips up seas that can toss a kayak over as easily as a piece of driftwood. The waves don’t build as high in the shallow channels between the islands, but choppy and confused, they can be worse than big rollers. Historical reenactment is one thing, foolishness another. I’m with guide Ken Bruland, owner of the Beaver-based Inland Seas Kayaking. Bruland has a slew of certifications — sea kayak instructor, EMT specialist, water rescue — and he knows the jetties and tiny islands you can "scooch to," as he says, if a wind kicks up. He’s equipped with flares, GPS, radio and a cell phone. Our party is as safe as it can be on a very big lake in very small boats.

There are seven of us on the trip. Besides Bruland and myself there is my teenage daughter, Cassidy, and my friend Julie Bacon and her two teenage nieces, Kate and Elizabeth. John Martin, a quiet, white-bearded sociology professor from the University of Michigan and kayaking pal of Bruland’s, is along to assist.