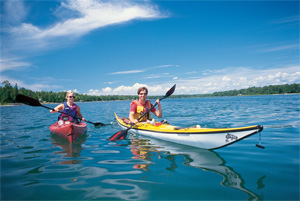 With 36 islands sprinkled along 12 miles of Lake Huron shoreline, the Les Cheneaux Islands (lescheneaux.org) are a jigsaw of nooks, coves, channels and jetties. The archipelago is a paddler’s paradise, but it’s best to go with a guide like Jessie Hadley, owner and operator of the Hessel-based Woods and Water Ecotours (906-484-4157, woodswatersecotours.com). Hadley knows how to read the weather and find refuge if need be – the wind funneling through the islands’ channels can whip a placid Lake Huron into a fury in minutes. Hadley guides a gamut of trips, from rigorous overnight adventures to day excursions tailored to novices and families.

Sign on for a half-day paddle to the Aldo Leopold Preserve on Marquette Island, the largest island in the Les Cheneaux archipelago. The 900-acre preserve is named for the renowned 20th-century conservationist and author of A Sand County Almanac who summered in Les Cheneaux as a child and young man.

You’ll shove off from the public beach in Hessel in a light aquamarine chop, head across the mouth of Hessel Bay, around the tip of Marquette Island’s Cube Point and into Wilderness Bay. Tiny Birch Island hovers just off to the west, and past that is the mainland’s Brulee Point. From your yellow kayak the world seems knit in shades of blue and green.

On Marquette Island, stretch your legs in the earth-scented cedar and birch forest that Leopold loved. On the way back, look for eagles perched in trees along Wilderness Bay and for shadows of fish taking cover in the boulders below your kayak. Beach your crafts at Hessel Bay, bid adieu to Hadley, and head down the street to the Hessel Bay Inn (906-484-2460) for a plate of yellow lake perch. Eat on the deck – the view of Marquette Island across Hessel Bay comes with every meal.