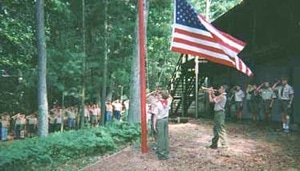 A judge’s decision has forestalled the sale and development of the nation’s oldest Boy Scout camp, Camp Owasippe, by affirming Blue Lake Township’s right to limit development on the site, which encompasses 4,877 acres about 15 miles north of Muskegon.

The Chicago Area Council of Boy Scouts, which owns the site, had sued the township to overturn the zoning restrictions because it is trying to sell the property to a housing developer for $19 million, and the sale is contingent on a zoning change. The council claims the camp is not profitable and that the chapter needs the money. Under one proposed zoning plan, a developer would be allowed to build nearly 1,300 homes on the site.

In a written statement, the council’s attorney, Devin Schindler, said, “We are disappointed by this ruling. We are not surprised and plan to appeal.”

Meanwhile, an alternate group has offered to purchase the site for $12 million and plans to build a nature center and conference facility while complying with existing zoning restrictions. The decision was handed down by 14th Circuit Judge William C. Marietti.