In Search of Bluegills 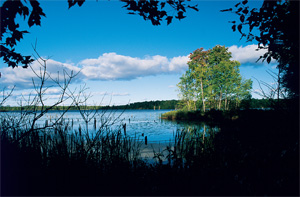 One balmy night last summer two of my sons and a friend commandeered the kitchen preparing for their first solo fishing trip on the lake. It was a process shaped both by the coiled energy of preadolescent males and the orderliness of the men they would one day be. More food was packed than could be eaten in a day much less during an excursion that would surely end with the arrival of midmorning’s hot sun. They all fell asleep talking about fish to be caught and the reliability of alarm clocks.

The lake at dawn was glass-still, just a slight quiver running down its spine. I hugged myself against the cold, ostensibly—and watched as our oldest, Ben, 11, our second, Peter, 8, and their pal loaded gear and rations into the boat, which, at 10 feet and light enough to hoist on a couple of shoulders, seemed suddenly entirely too small. The motor, however, loomed large and too powerful. This was the first time Ben would take the boat out of sight, into the channel at the end of our lake where the marshes make for great bluegill fishing.

They took off, Peter waving back at us enthusiastically, Ben’s gaze locked on the course before him. I could hear the prop cutting the water long after I could make out the curve of their faces, the shape of Ben’s slim back tense with the drama of the morning.

If the gift of a boat had begun a rite of passage, then this trip, over a year later, was its completion. Neal and I had wanted to find something for Ben’s 10th birthday that might represent new freedom and the responsibility that comes with it. The idea of a small boat that each of our children would earn the right to drive alone at age 10 came out of my own experience. I had been 10 years old myself the first time I climbed into the scarred, impossibly heavy rowboat that came with the first cottage my family rented. My older siblings lived in the other boat, a turquoise and white speedboat that pulled kids from all over the lake on water skis, sometimes six at a time if there were an audience. That old rowboat had been my shot at some kind of freedom.

At the start of that summer, my mom stood on the end of the dock with me pointing to liquid landmarks, defining my boundaries by the color of the water. Dark, almost black was absolutely off limits. I know now how torn she must have been wanting to create a large enough arena in which I could feel some sense of adventure, but seeing all that could go wrong for a child alone on the lake. As for me, I saw nothing but possibility.