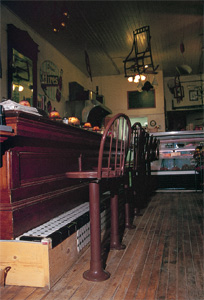 Sit where Hemingway did – on the front porch bench at the Horton Bay General Store. Belly up to the soda fountain inside for novel treats, then pop into the Red Fox Inn next door to browse old copies of Ernest Hemingway’s books.

When you reach Horton Bay, a hamlet on the shore of Lake Charlevoix, park your car – you’ll want to leave this century behind for the early years of the last one, when Hemingway roamed here. Such time travel is easy to achieve, because not much has changed.

Picture Hemingway as a teenager, his little sister Sunny in tow, heading into the white clapboard Horton Bay General Store (05115 Boyne City-Charlevoix Road, 231-582-7827) to buy her goodies – an excursion she wrote about in her book, Ernie: Hemingway’s Sister "Sunny" Remembers. Long before his sister included it in her remembrances, Hemingway had already ordained the store’s posterity by describing it in his Nick Adams story, "Up in Michigan."

Next door, the Red Fox Inn (05156 Boyne City-Charlevoix Road) is where Vollie Fox, a fishing buddy of the young Hemingway’s, lived. Fox’s grandson Jim Hartwell runs a Hemingway bookstore here now. If the shop is open, stop in for a delightful earful of Hemingway trivia from Hartwell.

Across the road and down Lake Street you’ll see Pinehurst Cottage (privately owned now) where Hemingway stayed as a young man. The cottage is also where Hemingway and his first wife, Hadley, celebrated their wedding breakfast. At the Lake Street public access, you can look across the water to Ten Mile Point where the fictional Nick snubbed Marjorie. Horton Creek, the site of fishing trips fact and fiction, is a short walk west of town. Bring your fishing pole as Hemingway did, or take a seat on the footbridge that crosses the creek and pull out your copy of Nick Adams for one great read.

Head on back to the Horton Bay General Store for a treat at the old-fashioned soda fountain, or order up something more 21st century, a panini perhaps. If you’re here on Friday or Saturday evening from May 1 through October 1, make reservations for dinner. The New York strip is garnering a bit of fame all its own.

Note: This article was first published in May 2006, and was updated for the web February 2008.