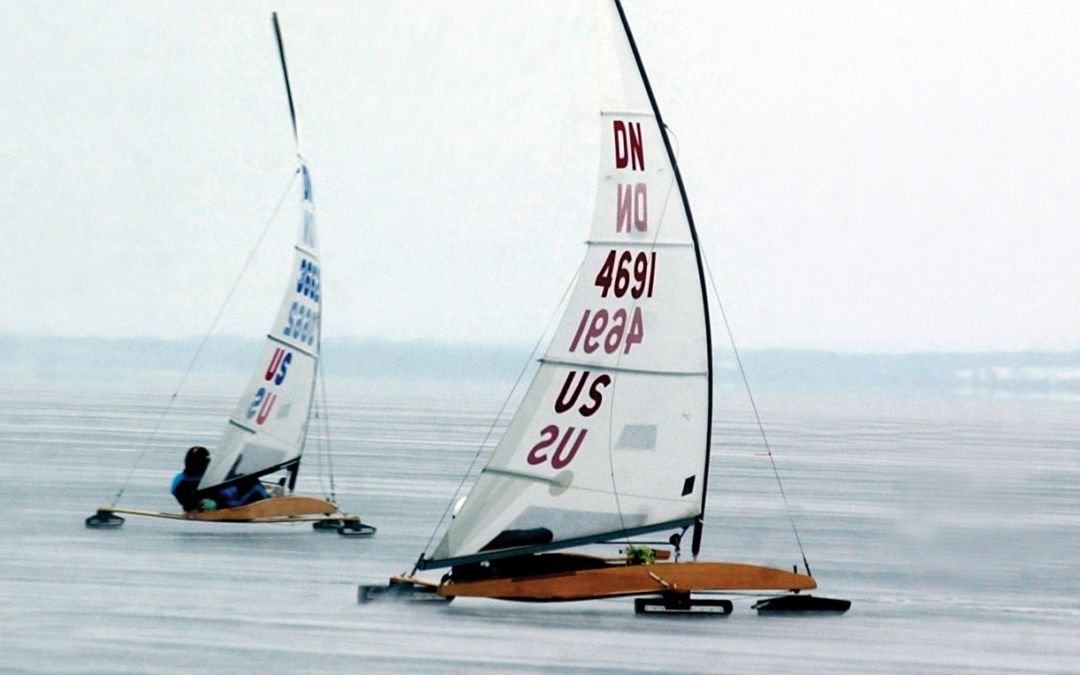 65 mph. A craft that’s basically on skates. We head out to discover the sport of ice boating in Northern Michigan.

This Traverse Magazine classic was published in March 2007. Subscribe.

Ice boating is not a sport for the easily disheartened. Or the impatient. Most ice boaters will tell you it’s a sport that draws Type A personalities: tenacious, determined people who will wait all year for a season that lasts, at best, 12 weeks, and for conditions within that season—a veritable Rubik’s Cube of environmental variables—to align.

First, there must be ice—at least a two-mile-wide swath of it. It must be at least 4 inches thick, preferably black, sans snow, with few cracks or holes, and free of ice skaters, fisherman and roaming dogs. (In desperation, of course, ice that’s mottled, cloudy, snowy, cracked, punctured and shared will do.) There must also be wind—12 mph is ideal, though if the ice is right, you’d be hard-pressed to find a sailor unwilling to white-knuckle it up to 16, or unused to making the most of a puff above 4. 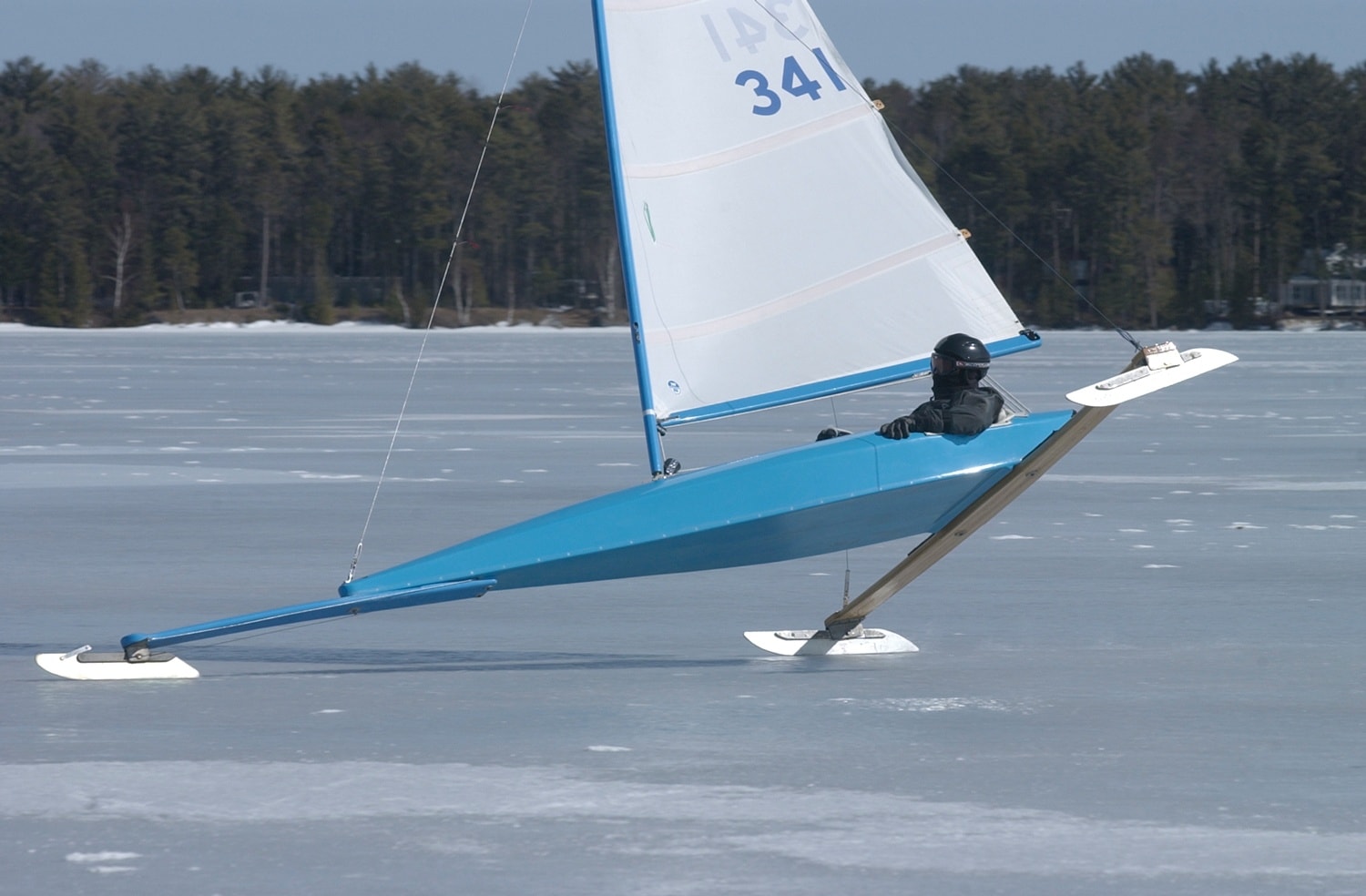 As for the sailor, he must be hardy. He will spend entire days running across an icy expanse, diving into the open cockpit of his ice boat and careening around in, necessarily, below-freezing temperatures. Depending on the boat occupied, he will typically zip about at speeds around 60 mph; in some boats, 100 mph or more. When racing he will maintain the highest speed possible while navigating a tight circular course shared with an army of fellow ice boaters who both chase and hurtle toward him, hopefully obeying right-of-way rules.

Finally, he must be prepared. Even with skilled sailors at the helm and bright orange cones marking dangerous holes and cracks in the ice, boats still crash, and boats sink. Thus, it is essential each sailor don a helmet—often bungeed to his belt for neck support because he must lay flat on his back to avoid the boom of the swinging sail, yet keep his head slightly lifted to see. It is also recommended he hang two ice picks from a rope around his neck. In the unfortunate instance that his boat falls through a hole in the ice, he will use these to claw his way out.

With its inherent risk, demanding physicality, breakneck speeds and competitive nature, you might think ice boating is a sport for the young.

Hit a frozen lake Up North, and if you see ice boats whizzing around, chances are good you’ll see more gray mops emerge from those helmets at the end of the day than the glossy locks of 20-somethings. Sure, there’ll be a few whippersnappers from the MTV generation, a handful of middle-aged men and women, but mostly …? 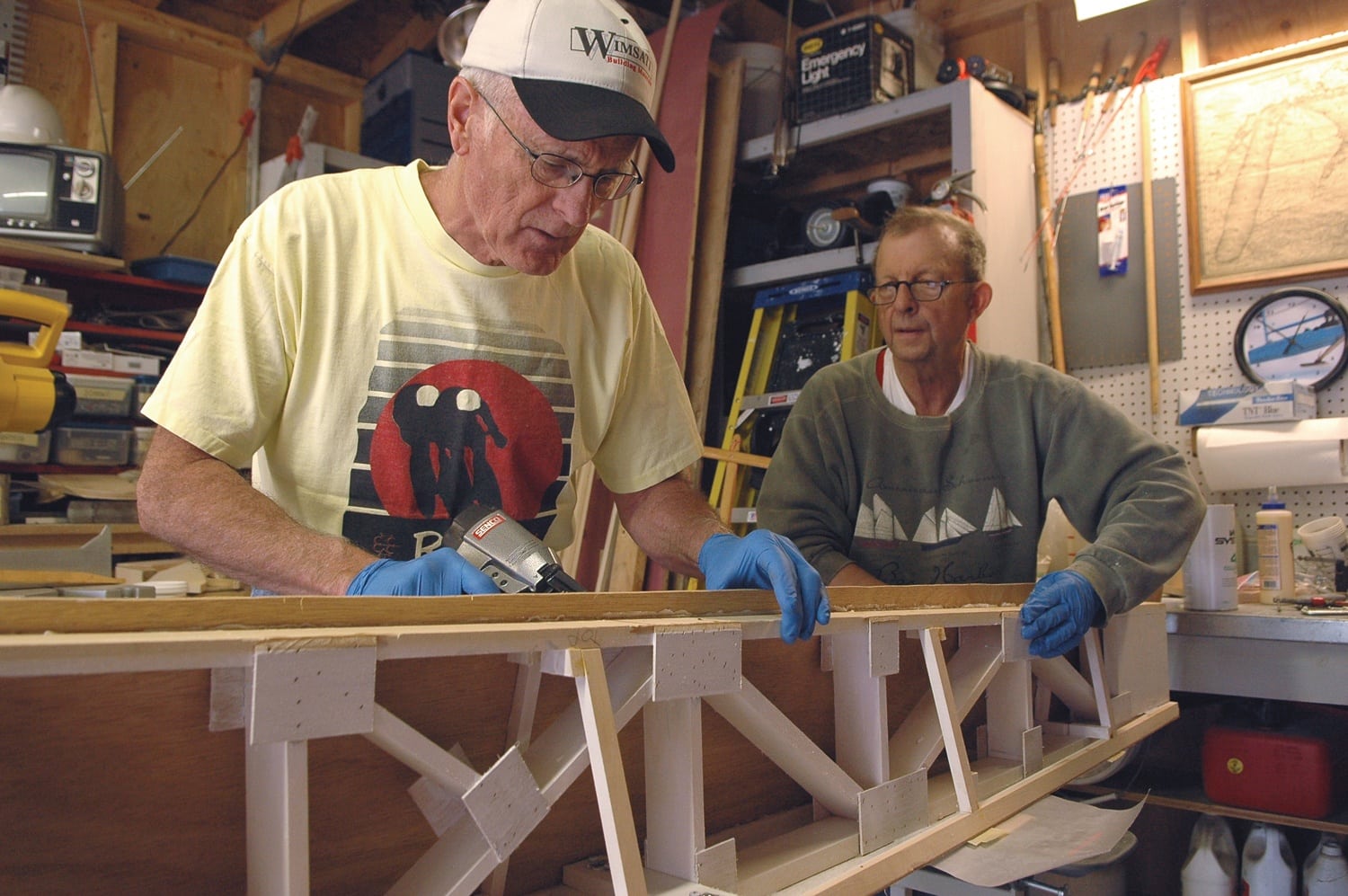 I’m standing with two of them in a garage that smells like hazelnut coffee and glue. The men, Bob Gray and Corey Hughes, are both members of the Grand Traverse Ice Yacht Club. Bob formerly piloted for the Coast Guard and commercial airlines; Corey recently retired from the land-survey company he owns. Little more than a month has passed since the year’s ice boating season whimpered to a close, but true to the sport’s obsessive nature, the pair is already preparing for the next season. They’re building an ice boat.

Bob squints through his thick-rimmed magnifying glasses at the long plank of basswood that will become the center support of the boat’s hull. The plank sits on a makeshift workbench—two doors set lengthwise atop sawhorses—that stretches the length of the garage. He tugs on his ball cap and peers over his glasses at Corey. “Off that much, huh?”

Corey straightens up from where he hunches at the opposite end of the board. He scratches at his white hair. “Well, a quarter-inch,” he says. Bob grunts and throws his hat down. 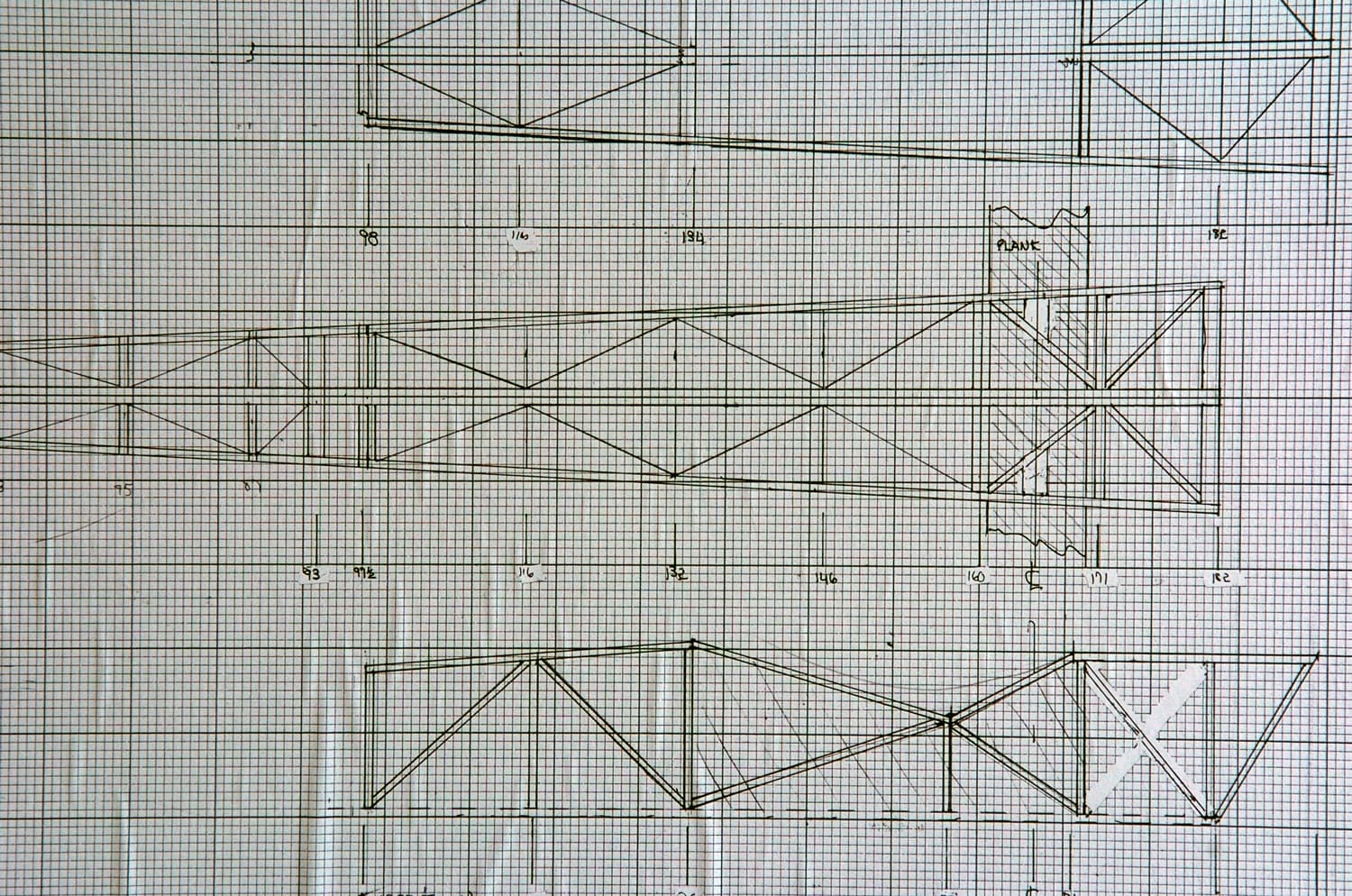 Although it’s possible to buy ice boats, the market, like the sport, is a small one. Demand typically outweighs supply. If you can find a new or used one, you can expect to spend at least $1,000 and as much as $8,000, depending on the class of boat. Many of its participants opt to build their own.

“It feeds into that Type-A mentality,” Corey explains, laying a straight edge ruler down and marking the line where the cockpit’s center will fall.

Bob nods, grabbing a rearview mirror that’s been broken off its car to double check the line’s center. “It’s something that, if you have an idea, you can say, Well, I’m going to try that. And if it doesn’t work, you throw it out, make firewood of it. But if it does work, it’s like fly-fishing. If you catch a trout on a fly you tied, it’s really great because, hey, that’s my fly. And if you invented that fly? Even better.” 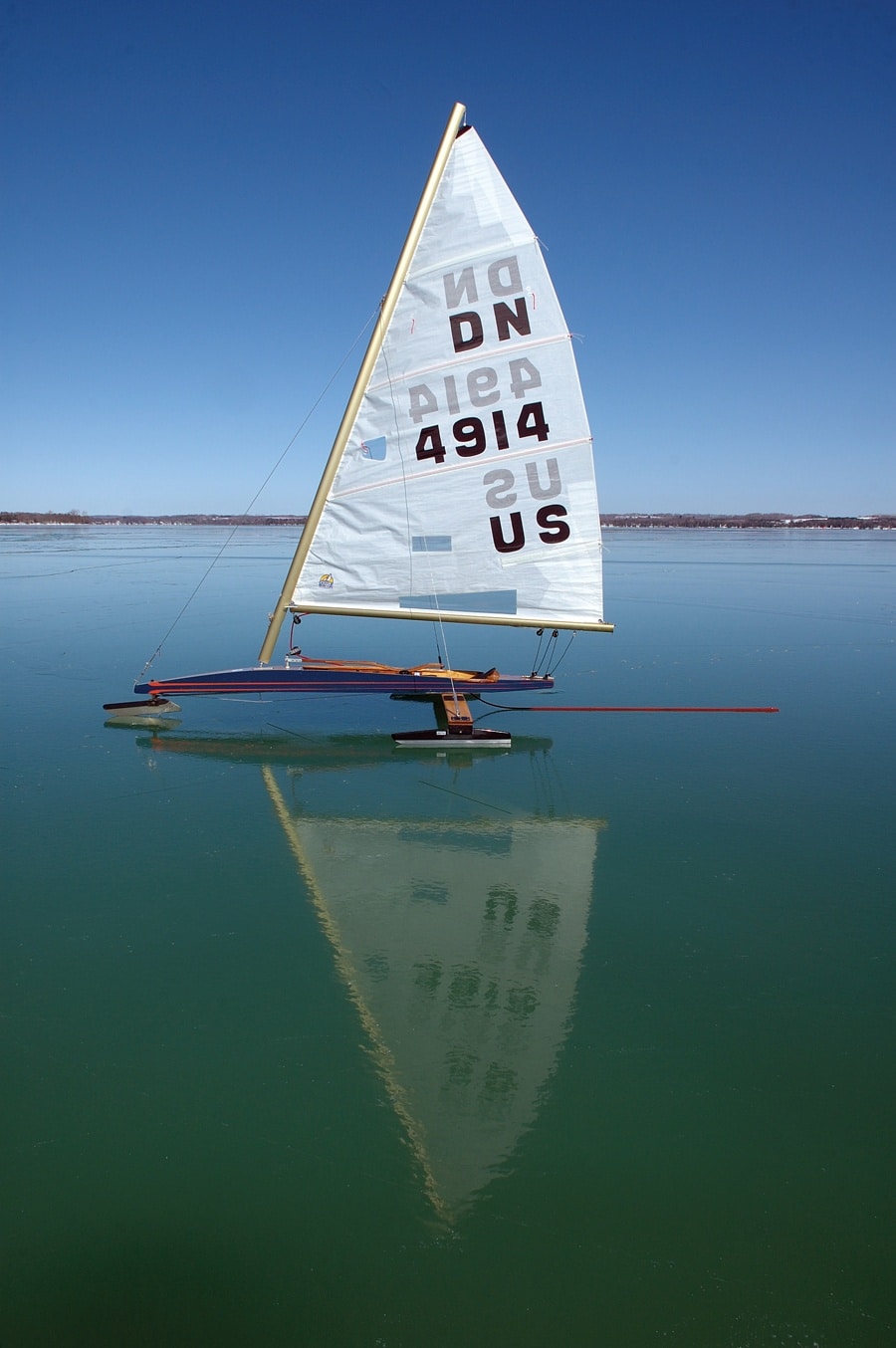 Bob, a longtime hard-water sailor, has built 14 ice boats. He began designing this one—an ultra-light C-class Skeeter racing boat—about three years ago. But with a powerboat, a sailboat, three kayaks, a canoe and two ice boats already at home, he says he didn’t dare add another toy to his collection; his wife would kill him. Corey offered the perfect solution. A recent ice boating convert—he started when he retired in 2004—he owned only a two-seat cruiser called a Nite. He wanted a racing boat, and he was interested in building one. He also had room in his garage.

As Willie Nelson croons about mommas and cowboys from a radio in the corner, Bob and Corey explain why ice boating suits old guys so well: They’re retired. Their kids are grown. They’ve got more disposable income. Time to tinker. Time to race. Time, says Bob, to drive to Wisconsin and sit by a lake for three days waiting for the right ice and wind. Middle-aged folks don’t have that luxury. And kids probably wouldn’t consider it one.

“If I were a teenage boy,” he says, stepping over a tangle of orange extension cords, “I’d much rather be on a—what do you call those things? Snowboard?” Corey nods. Bob continues: “On a snowboard, with a bunch of girls around me. Not standing around on the middle of a frozen lake with a bunch of old men waiting for the wind to blow.”

Ice boating originated for functional reasons—the Dutch built ice boats in the 1700s to ferry goods and passengers up and down their frozen canals in winter—but rich American guys turned it into a sport. In the 1870s, John Roosevelt’s monstrous ice boat, the 70-foot Icicle, was a common sight along the Hudson River. Rigged like a schooner with 316 square feet of sail and crewed by a team of six—one of whom was occasionally Roosevelt’s rough riding nephew and future president, Teddy—the Icicle raced and often bested high-speed trains rocketing along the river’s shore.

The sport’s popularity peaked around the early 1900s but waned as motor-powered vehicles set new speed records. Where it persisted, it largely remained in the domain of the wealthy.

Then, a chain of events in Michigan changed ice boating forever …

A Scotsman named Archie Arroll moved to Detroit in 1923 and nabbed a job at Motor Boat Lane. The master craftsman, soon building racing boats for prominent Detroiters like Horace E. Dodge, caught the eye of W.E. Scripps, president of the Detroit News. Scripps hired Arroll to build one of his children a model yacht for Christmas. He was so impressed with the results, he hired Arroll to head the News’ Hobby Shop, where the craftsman quickly attracted a cult following of fellow tinkerers—among them, ice boaters Joseph Lodge and Norman Jarrait.

In 1937, the News sponsored an ice boat design contest. Arroll, Lodge and Jarrait developed a racing boat that was only 12 feet long and weighed just 75 pounds. Despite its wee mass—unheard of at the time—the boat’s swiveling mast and 60 square feet of sail enabled it to fire up on a gentle breeze that wouldn’t budge bigger boats. And in winds that pushed the big boats fast, the wee boat flew even faster. But the new boat was extraordinary for another reason: it cost only $32 to build. Christened the DN-60 in honor of the sponsoring newspaper and the boat’s sail size, the boat excited Depression-era Detroit and revolutionized ice boating. Today, the DN remains the most popular ice boat in the world. 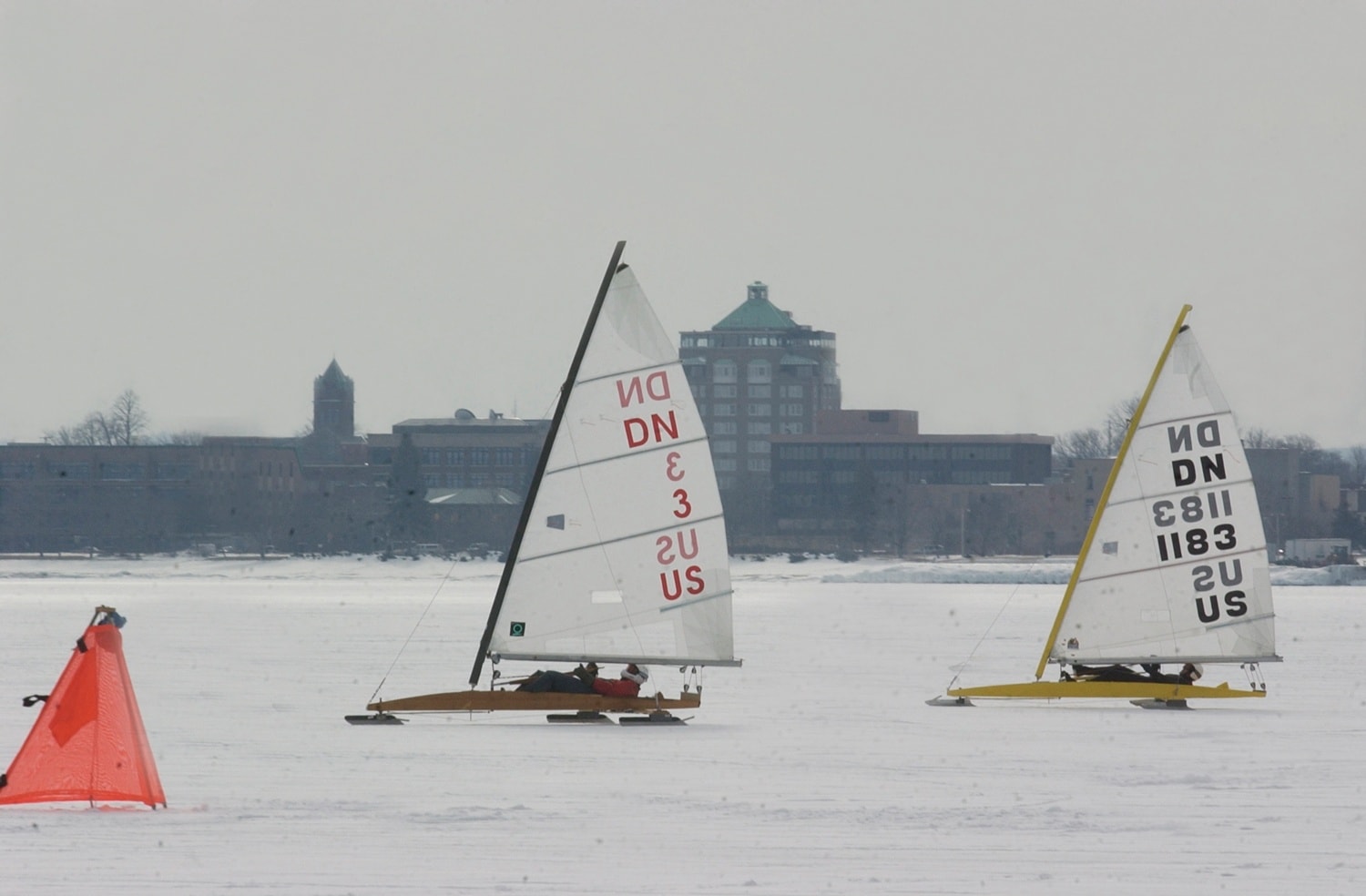 David Frost, from Lansing, is an ice boater, a hard-water sailor, one of a small legion of folks who spend their winters chasing ice—ice that is good, solid and slick. When the sailors find it they round up their comrades, load up their boats—and get there.

Around him on the ice sit about 20 different kinds of ice boats—Arrows, DNs, Skeeters, Sprinters, J-boats—in various stages of setup. About a mile out, at least 30 more boats zigzag around each other. From here, the billowy ballet of sails looks peaceful, Zen-on-ice-like, but the serene choreography belies the truth gnawing its way through my snow pants: there’s a 15 mph wind spewing out of the northeast, and it’s wicked cold out here. 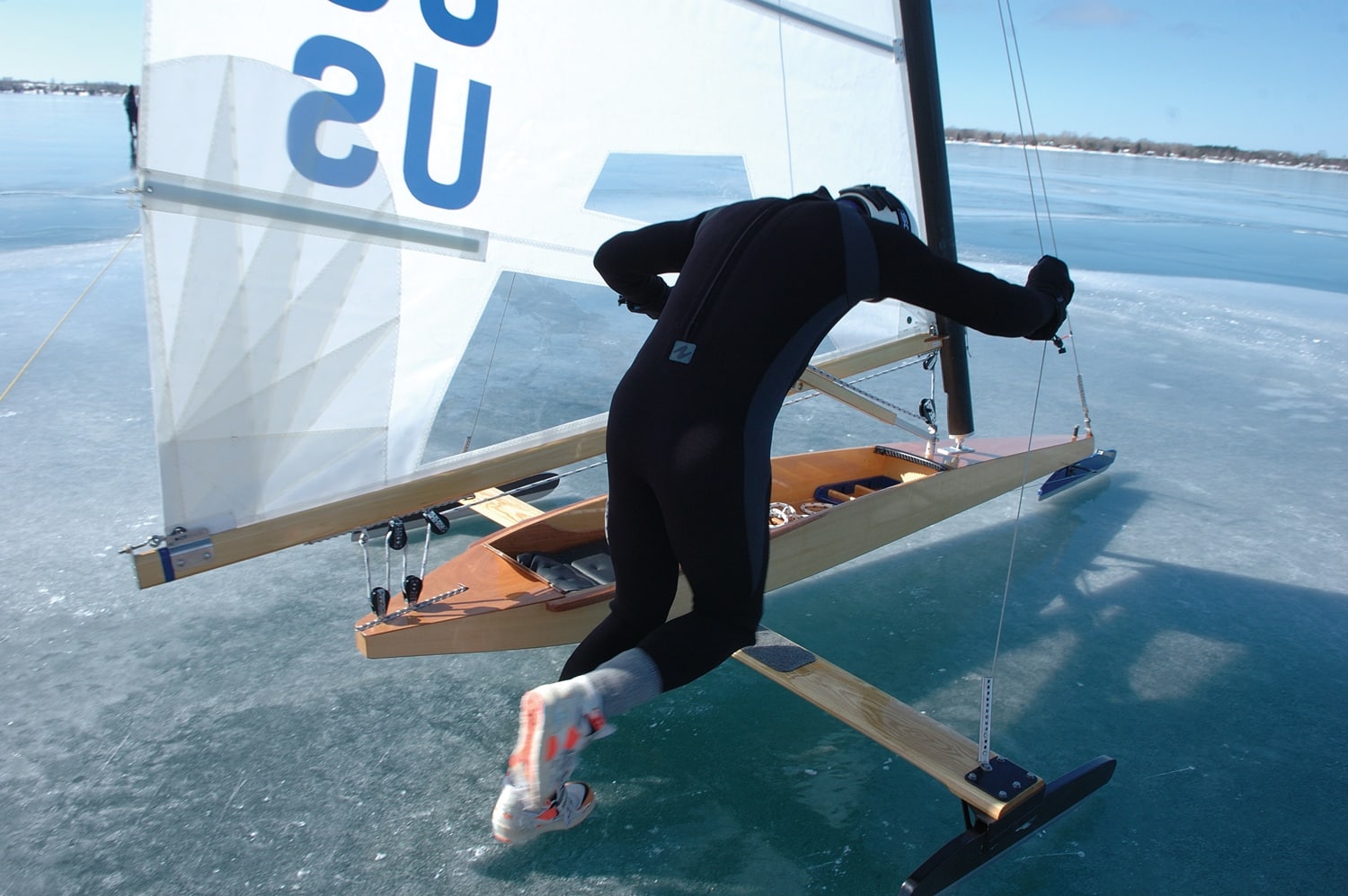 I watch David dive into his boat and zip off toward the lake’s center. A cluster of DN’s are gathered out there, about to race. I borrow a helmet and hitch a ride in a blue Nite with a guy named Ron. After I inch down into the cockpit, he sprints behind the boat, pushing it to gather speed, then lunges inside, slamming onto his hip and squeezing in beside me in one fluid motion.

He lets out the sail a touch, and I feel the wind slam into it and shoot the boat forward like a bar of soap out of wet hands. We haul across the ice, wind howling in my ears. Every pebble, every bump, every hairline crack we hit vibrates a kind of glacial Morse Code into my bones.

There are pedals inside the hull near our feet, which Ron pushes to steer us left and right across the wind’s path. Each time he tacks in a new direction, the rudder screams against the ice like a knife scratched across a chalkboard, then the boat finds its straight line again and charges forward faster still. When he tacks a hard right, we break the line and catch a gust that launches the port side of the boat into the air, then slams it down, rattling my head in my helmet. I can’t tell if it’s abject fear or absolute exhilaration, but I can’t stop laughing.

When we finally near the lake’s center, Ron turns into the wind and the boat slows, then stops. The wind still whistles around us. Grinning wildly, he looks over at me. He shouts, “I always say the thing about ice boating is, it’s the most fun you can have with your clothes on and the second best way to make a girl scream.”

I unpeel myself from the floor of his ice boat and crawl out onto the ice. For a minute I think I might be offended. Then I feel my knees quaking with adrenaline and the grin frozen onto my face, just as wild as his. I pause.

Maybe he’s got something there. 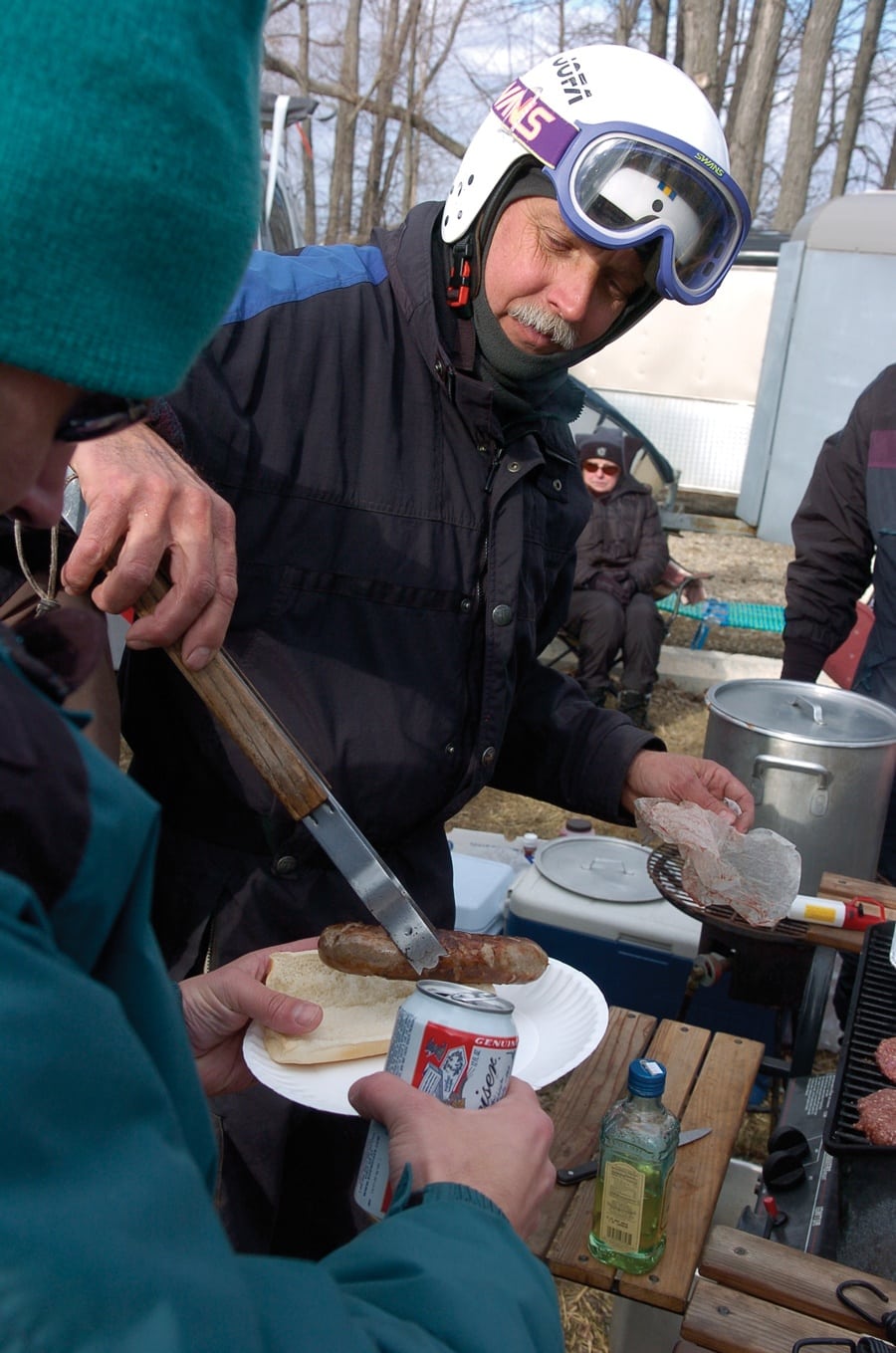 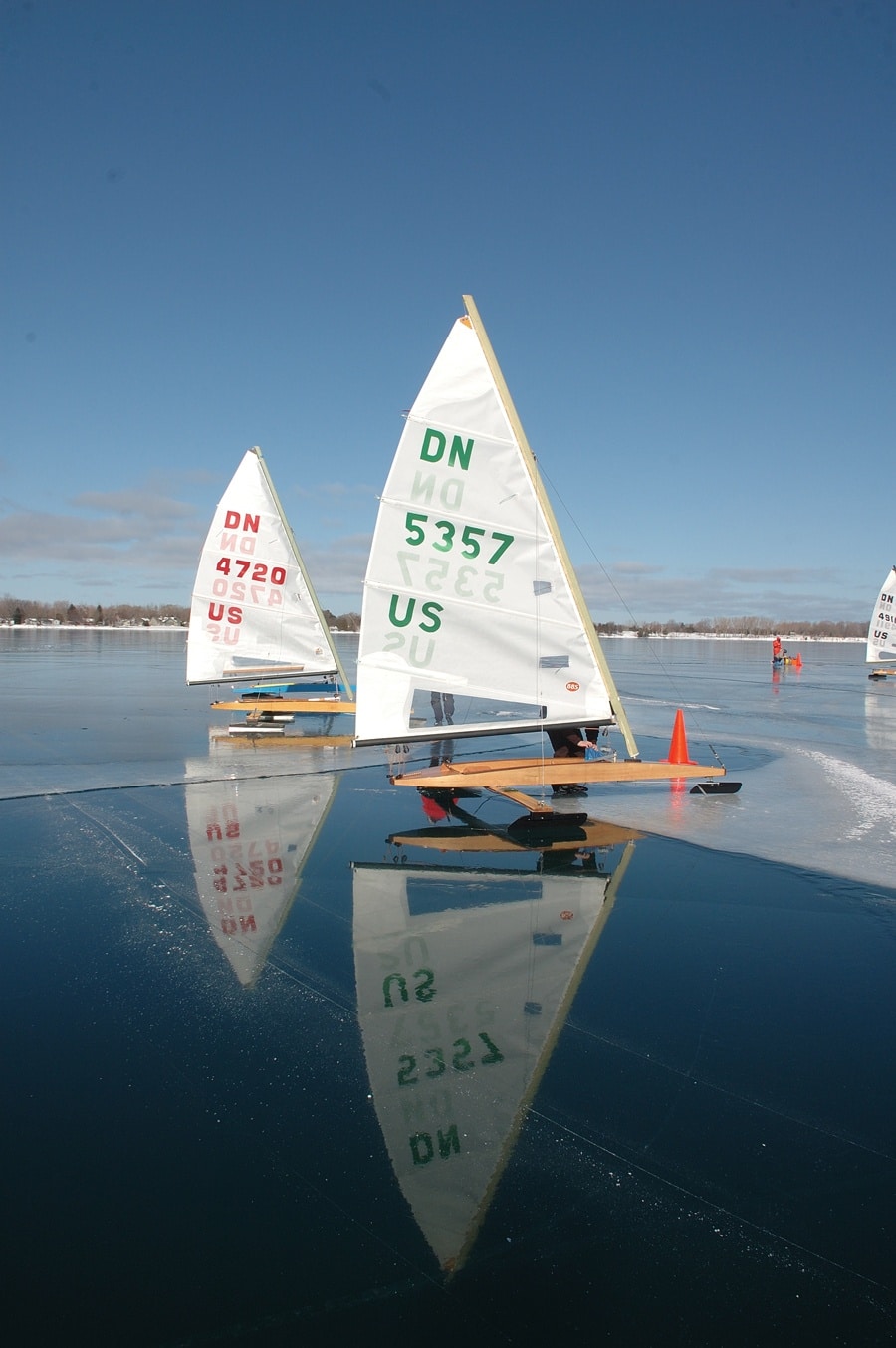 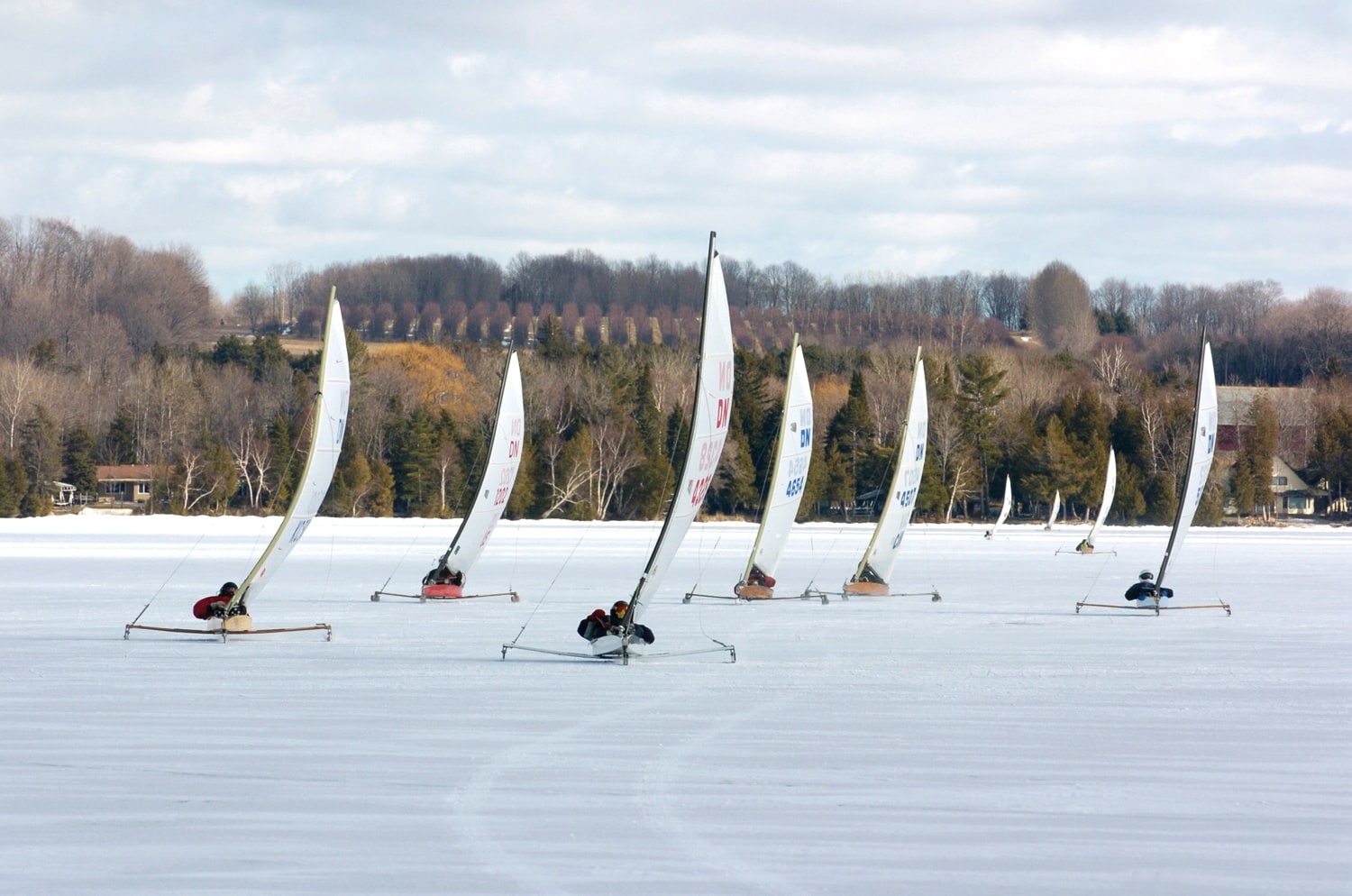 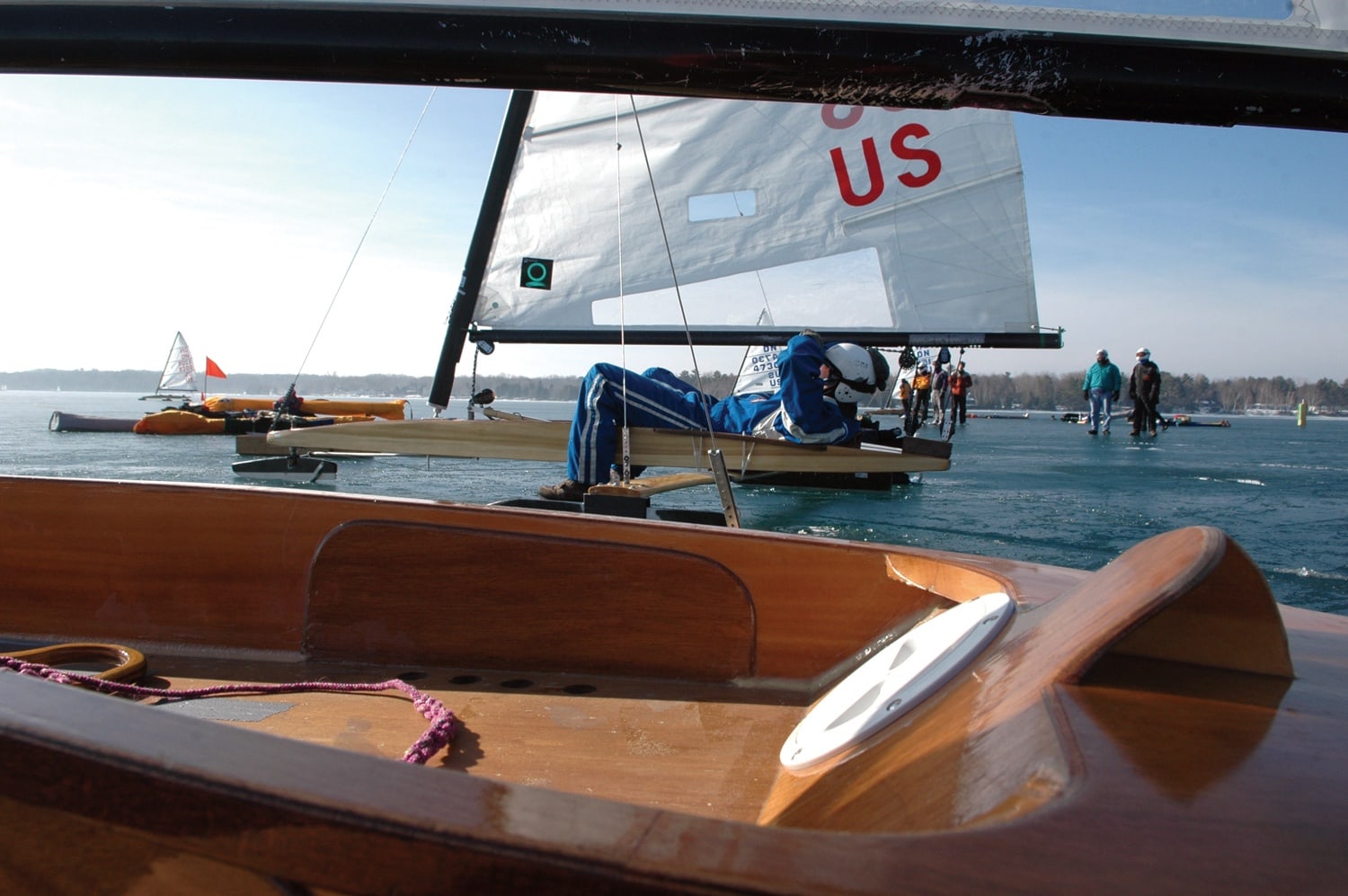