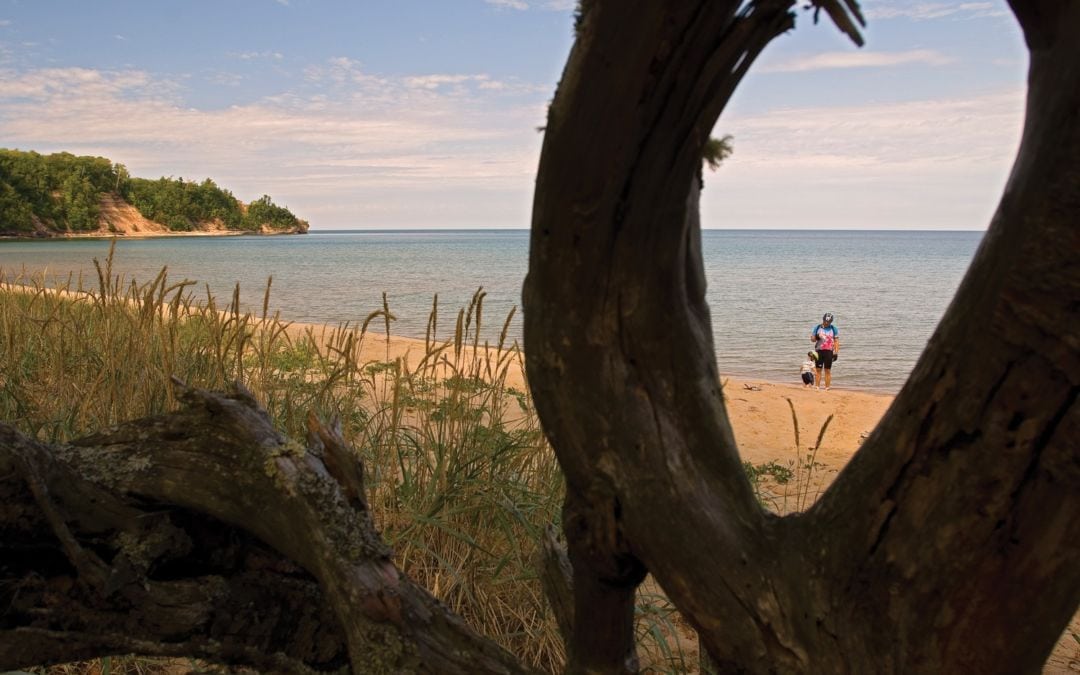 Grand Island’s big beauty, big quiet, and big trails can be all yours in one itty-bitty weekend.

Grand Island isn’t enormous. True, it’s the largest island on Lake Superior’s south shore, but the longest reach is only 8 miles, and its total shoreline keeps to a tidy 35 miles. Yet there’s a majesty to the place that more than fulfills the promise of its name. Made of the same sandstone strata of the mainland’s nearby Pictured Rocks National Lakeshore, Grand Island is a stubborn survivor of millions of years of glacial crush and eroding melt. Its ragged cliffs—some of them towering 300 feet above the water—are a geologic snub to the relentless slaps of Superior down below.

The island’s interior is quieter but no less sublime. More than 130,000 acres of woods blanket the landscape, shady trails crisscrossing among pines, maples, hemlock, ferns, and wildflowers. Save for the once-daily tour van and the few cars already here, no cars are allowed. A handful of generations-old private cottages dot the island, but other than their few residents, the island, a National Recreation Area since 1990, is largely uninhabited. For all these reasons—the big beauty, the big quiet, the big trails—my boyfriend Jon and I have been drawn to Grand Island. And we’ve brought with us a big plan: We’re going to bike the island’s 23 miles of perimeter trails. 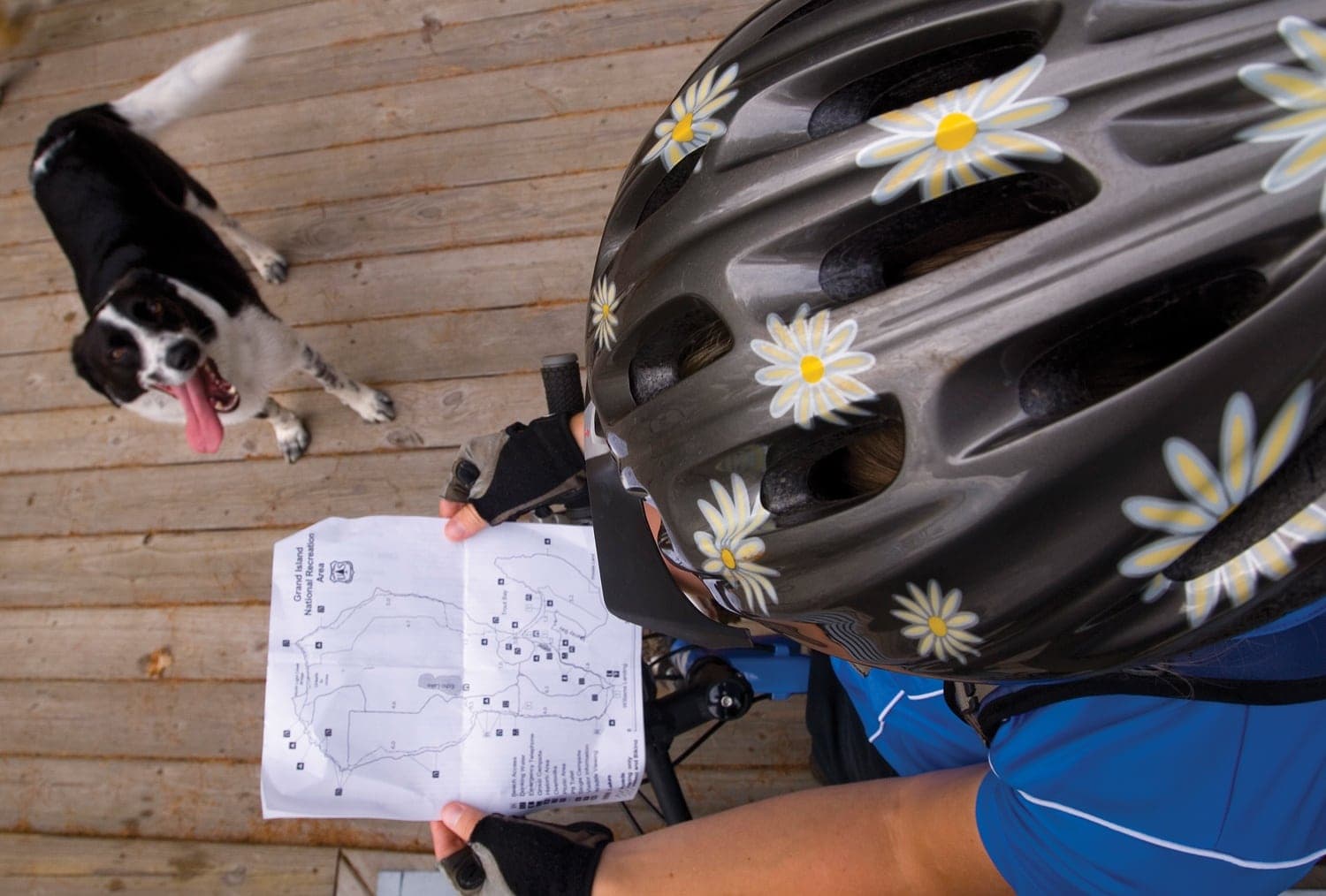 When the ferry from Munising drops us off at William’s Landing, the southernmost part of the island, we don’t rush. We heft our packs onto our backs, climb on our bikes and wobble up the road to Murray Bay Campground, looking like two giant turtles and moving even slower. The campground is less than two miles away, but characteristic of the island’s low-lying south end, where long strands of beach sneak into Lake Superior shallows, much of the road is sand, and we stall often. We don’t mind. Around us, juneberry and hawthorn trees poke out among maples, shrubs and wildflowers. Squat cabins and a cluster of classic cottages painted black and trimmed in white appear as the road bends. The sun shines. The breeze is light.

We see not a soul when we arrive at the campground. Dumping our packs and bikes, we run through the woods to find the best site. Each is set back in the trees and connects to the water by a thin path. We pick a site deep in the shade, then stroll the hundred yards to the beach—a narrow slip of a thing—to dig our toes in the cool sand, examine the driftwood and build elaborate temples of rocks and sticks to mark our path home. 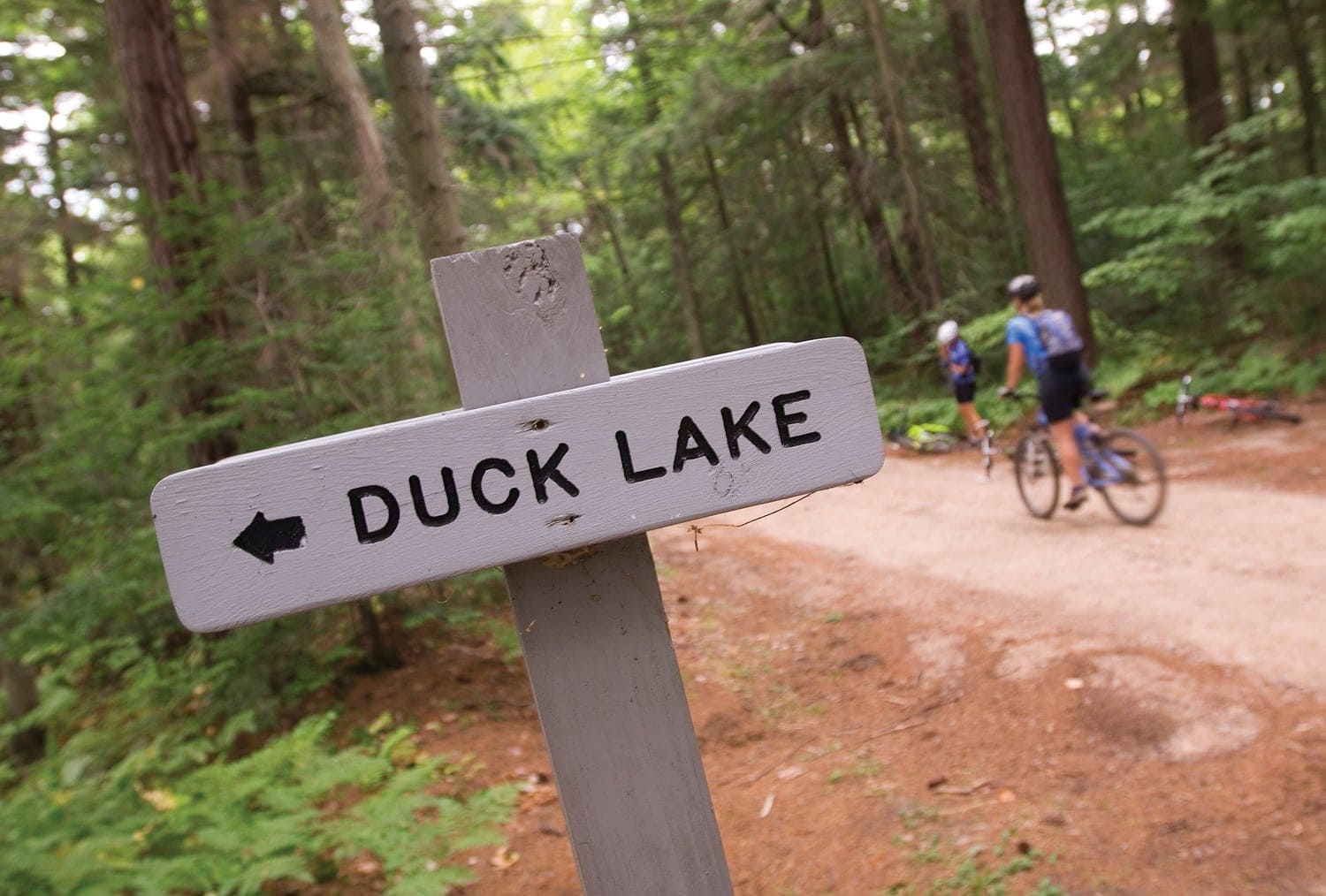 An hour later, we’re pedaling north past pond-sized Duck Lake. When we arrive at Trout Bay, we yank off our shoes and kick through the shallows. Even in the height of summer, Superior’s temperature rarely rises above 48 degrees. The dull throb in my ankles confirms the chilly reputation. These waters are better suited for fishing—Trout Bay the hot spot for lake trout and coho salmon; Murray Bay for perch, pike, walleye and rock bass.

Already mid-afternoon, and we haven’t even started the northward push up the eastern edge of the island. We kick it into high gear and find ourselves 10 minutes later lost on a loop we thought was the straight shot north. Worse yet, we need to go uphill to get back on track. I focus on the lush green forest around us, the sweet, ripe scent of leaves about to turn color for fall, and pedal to the crest. Soon we’re exactly where we intended: the path on the eastern edge of the island. The trail is still soft in spots. The majority of the island is a thin layer of soil over sandstone bedrock—thin according to geological standards, by the way, means between a half-meter and a meter-and-a-half deep. To a biker, it simply means you steer smart, aim for the grass and weeds on the edge, gain traction from the broken branches and stray leaves littering the path, and walk your bike when you’re pooped.

About halfway uphill the trail narrows under the canopy and, though we’re ascending, the climb is gradual and easy. We peer through the trees as we rise, catching peeks of Pictured Rocks’ tawny ochre cliffs rising from the bright blue water in the distance. The famed formation Miners Castle should be across the water from us now. I squint through the branches and lie and say I see it. Jon believes me. I ride on, grinning.

The wind blows harder as we near the north end of the island. The cooler air chills the sweat on my back as we snake our way through the scrub and trees, reminiscing about childhood days when a bike was your trusty steed, and your sole occupation was cruising your neighborhood and asking other kids, “Wanna ride bikes?” Jon and I agree we’ll ride bikes more, make time to come to more places like this. Then the edge of the earth disappears, our jaws drop midsentence, and we stop, hands frozen on our handlebars, feet planted on the bedrock, awestruck. 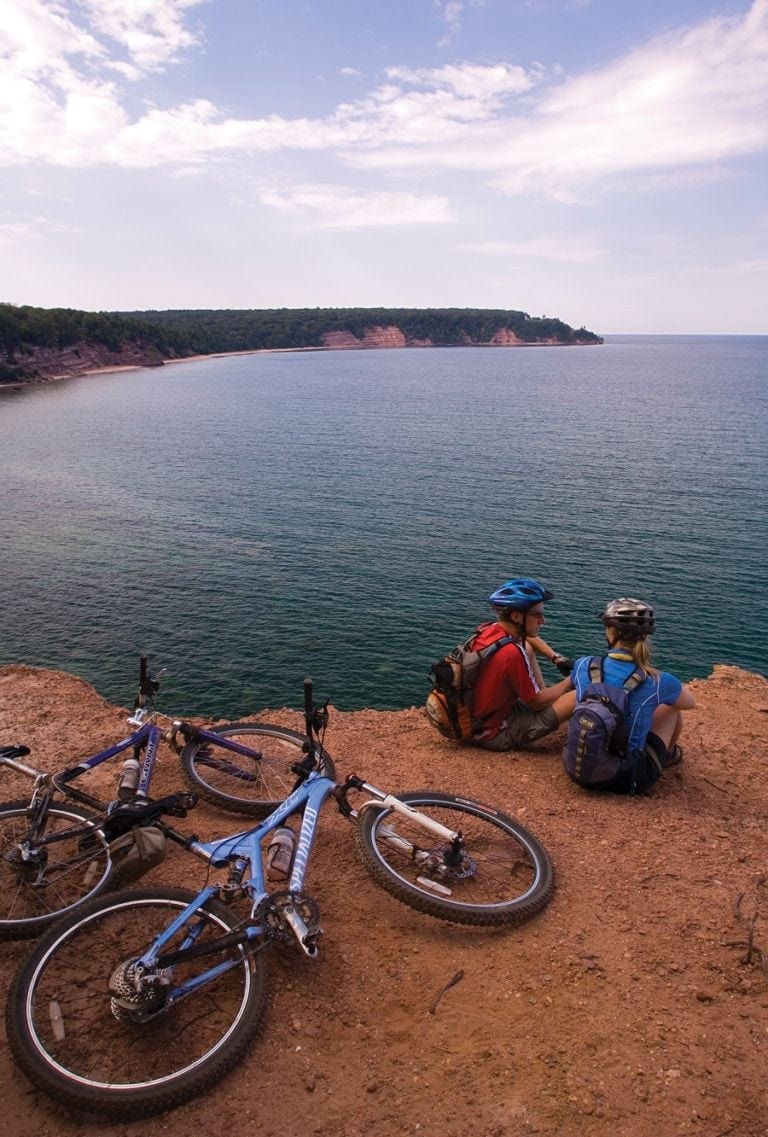 An infinite span of sky and water spreads before us. We’ve made it to the top of the island’s Northeast Point, a jagged, sheared-off rock face that towers hundreds of feet over the crashing surf. We toss our bikes to the dirt and run, then tiptoe, toward the ragged edge. We lie side by side on our bellies, inching forward on the lichen-mottled rock to peer over. The sandstone rock is laid bare below us, raw and weathered and sharp all at once. The roots of the few scraggly but tenacious pines along the walls hang onto anything they can to keep from plummeting into the frothy wrath below. We scoot backward and, in a ceremony befitting the scene, unwrap the sandwiches we’ve toted, certain we are in the world’s most spectacular picnic spot.

After that, it’s all downhill. Without us even realizing it, the trail’s coursed downward, spilling us out at the north shore beach, which seems almost a mirage, a tranquil oasis hugged between two monstrous cliffs that knife out of the water on either side. To our right is the cliff from whence we came. To our left is North Point, and on top of it, the North Light, a lighthouse privately owned and closed to the public.

To continue our loop down the west side of the island, we have to cross North Light Creek. The bridge over it is crumbling, and a sign cautions us not to, but the creek is small and the bridge low, so we head over without incident. In minutes we’re huffing it up toward the western edge, where stunning cliffs of Precambrian Jacobsville—deep red and white quartz sandstone used in the construction of several buildings throughout the Midwest during the late 1800’s—await. Eager to see them, I pedal faster. Then to my left, I see a skinny trail almost eclipsed by drooping branches. Jon stops to pull out the map. This sliver opening leads to the island’s interior trails—a quicker route back to our camp. I look at my watch. Already 6 p.m. And we still have to gather wood for tonight’s campfire. My enthusiasm for Precambrian Jacobsville fizzles in favor of flames. We take the shortcut. 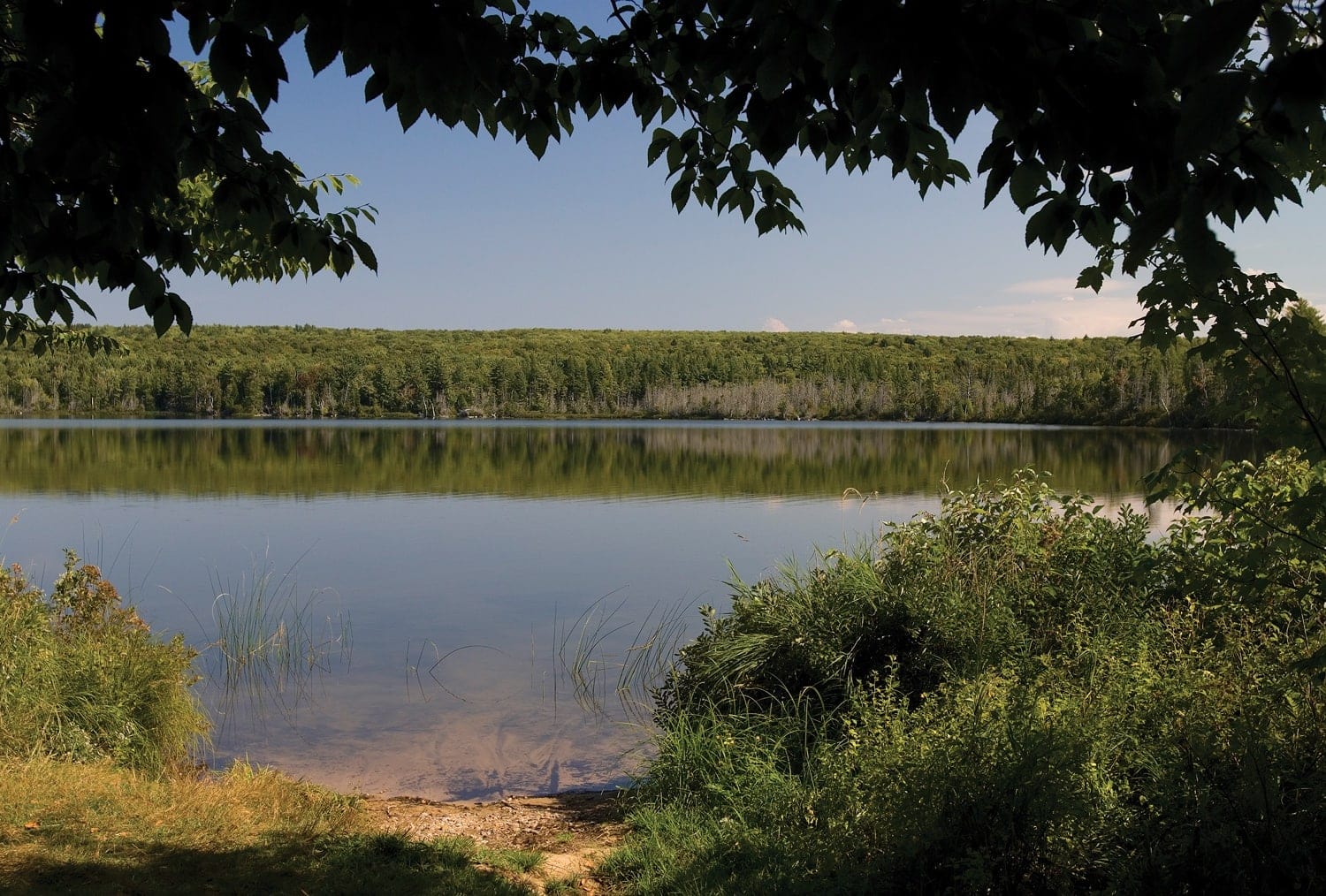 Our gamble pays us back tenfold in beauty. The trail curves through a tranquil woods, home to the island’s deer, rabbit, grouse and black bear. Where the path veers straight south, parallel with Echo Lake Creek, I keep an eye out for some of the thousands of Scotch pine planted by William Mather, president of the Cleveland Cliffs Iron Co. The company logged the island during the early 1900’s and Mather lived somewhere near the creek and brought several non-native species to the island: roses, lilacs, phlox, peonies, apple, plum, cherry trees and more. With the dense foliage around me, I truly can’t see the forest for the trees, so I bring my eyes back to the trail and head toward the island’s secret centerpiece, Echo Lake.

When we reach the lake’s weedy shore, we take a quick break to bask in the fading sunlight. The water is still except for the occasional ripple from a hungry bass, but the forest around us buzzes and titters in anticipation of dusk. I traipse across fallen logs and rocks, and discover an overturned wooden rowboat hidden behind the cattails. We peer underneath and all around. No oars. No choice but to saddle up and ride homeward.

Although the trail widens and the trees around us spread themselves thinner along this last leg of the trail, the canopy remains dense. The golden light grows faint and purple. I linger in the twilight, stopping to fashion my fleece vest around my handlebars, creating a makeshift carrier for fire-worthy wood I find on the way. Then I pedal slowly, picking up thick branches as I roll, inhaling the musk of the humid air as I near Murray Bay.

Tomorrow, I think, we’ll bike to the island cemetery to see the old gravestones of early island inhabitants. Maybe we’ll head up the eastern edge to see the Jacobsville formations. Or maybe we’ll just park our bikes, dig our toes into our patch of sand and watch the sun sparkle on the water. 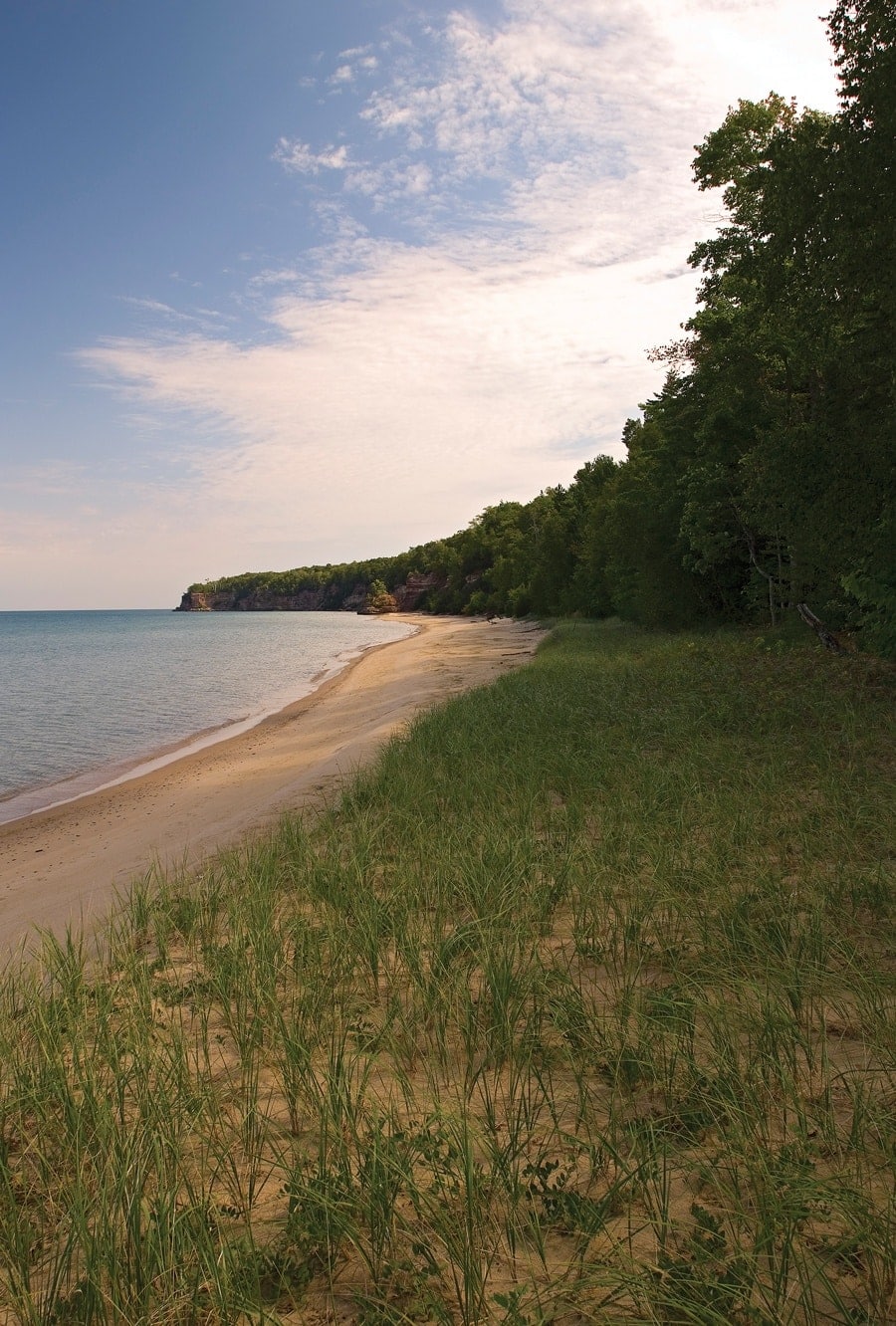 Access to Grand Island is by private watercraft (no jet skis permitted) or the passenger ferry, which leaves from the mainland’s Powell Point and is located on M-28, about 4 miles west of downtown Munising’s blinking light. Unloading—no docking—happens at the island’s Murray Landing; private boats may be pulled ashore in designated areas or moored in the island’s bays. View the ferry schedule online, Grand Island Ferry Service, or call 906-387-2600. 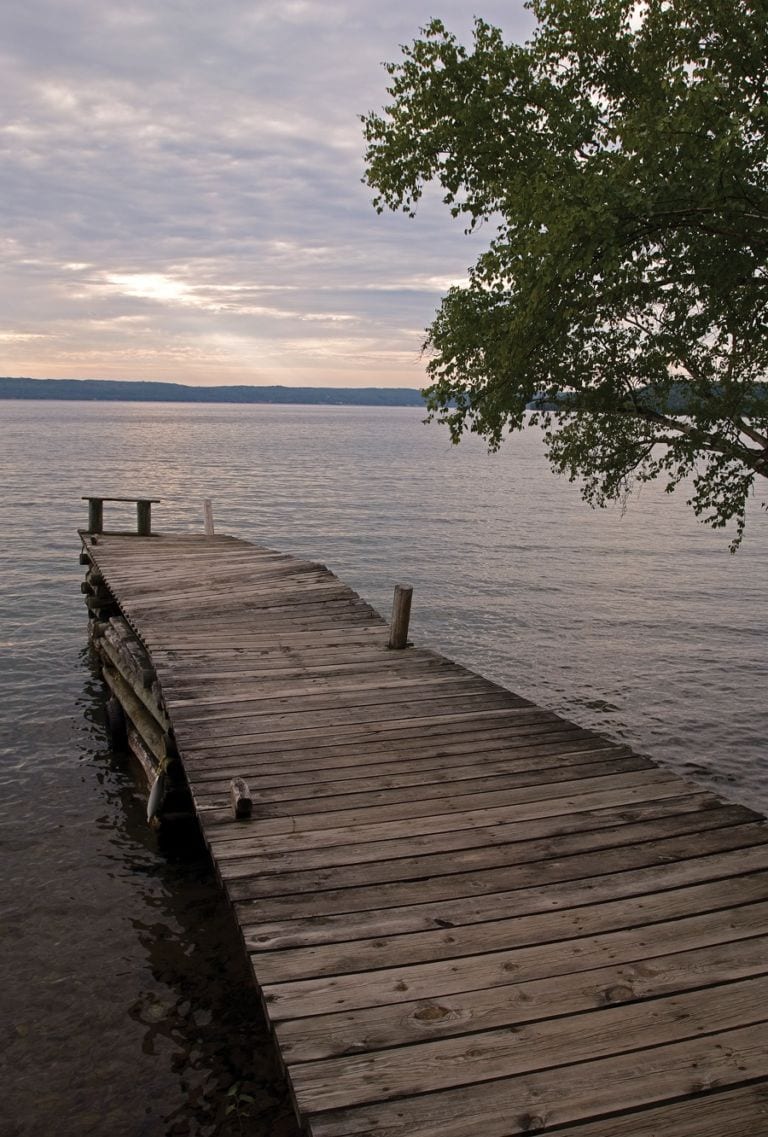 You can bike and hike the island’s unpaved roads and trails or jump aboard the ALTRAN bus, which makes a daily 2.5–3 hour narrated tour of the island. Buses are wheelchair accessible. Adults $45, children $25 (includes ferry service)

Black bears inhabit the island, so food must be hung or placed in bear bins provided at designated campsites, and day visitors should never leave snacks unattended. The weather on Lake Superior is often unpredictable, so be prepared to spend an extra night if foul weather develops.

In the waters near Grand Island, 30 ships have gone down—most during November storms between 1860 and 1929. Though half of the ships are still missing, the clear, cold waters have preserved the found ones well. Want to peer in the water without getting wet? Take a glass-bottom boat tour. A two-hour, narrated cruise takes you over two shipwrecks on Lake Superior’s floor, as well as by the East Channel Lighthouse and rock formations of Grand Island. Reservations highly recommended one day in advance, 906-387-4477.

This Traverse Classic was featured in the September 2006 issue of Traverse, Northern Michigan’s Magazine. Subscribe for more Up North adventures!