Golf The Traverse City Great Ones 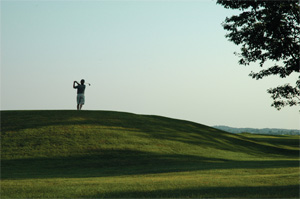 The rolling terrain, deep woods and big bay views make golfing in Grand Traverse a dream no matter where you play. But if you want to add some champion-style challenge to the picture-postcard scene, spend an afternoon on these three courses: The Bear and The Wolverine at Grand Traverse Resort in Traverse City, and High Pointe Golf Club in Williamsburg.

The Bear, designed by Jack Nicklaus – a k a the Golden Bear – is considered one of the monsters of Michigan. Terraced fairways, tiered greens, deep bunkers, and mounds and moguls aplenty test the toughest golfer’s staying power. Just come ready with extra sleeves of balls because woods, water and wetlands are everywhere, and the only way to finish one of the wildest rounds of your life is simply to keep swinging. (800-236-1577, grandtraverseresort.com)

You’ll reach Gary Player’s The Wolverine through the same Grand Traverse Resort clubhouse. Though the course’s 144 slope rating – that’s degree of difficulty in golf terms – slips in just under The Bear’s 146, The Wolverine does prove a smidge easier on a player’s patience, thanks to generous fairways and broad landing areas. But don’t think the expansive embrace ensures an easy game; the course length will press your driver skills to their limits – 7,000-plus yards from the back tees and 5000-plus from the front. (Each hole offers four sets of tees.)

What the Wolverine takes in time spent swinging, it gives back in beauty. The front nine boasts water and wetlands; the back nine takes you to a highland terrain that offers hardwoods and stunning views of Grand Traverse Bay and surrounding apple orchards. (800-236-1577, grandtraverseresort.com)