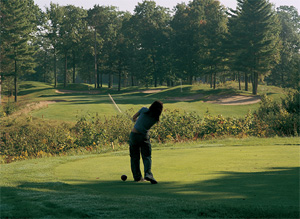 The LoonPar for the Course: Gently rolling fairways, fat (but lightning-quick) greens and doglegs aplenty.

Master Strokes: Golf for Women magazine named The Loon one of the 100 most female-friendly golf courses in the nation. We – one occasional weekend player and one golf addict, both women – put the moniker to the test. Neither of us was disappointed.

Spotless tee-to-green conditioning and stunning vistas galore gave us the pro treatment, while mildly undulating fairways proved fun but not frustrating to play. But don’t let the good looks and soft curves fool you: Women-friendly doesn’t mean patronizing to any player, male or female. Four sets of tee boxes – from 6,701 to 5,123 yards – embrace everybody’s driving mettle, while designer Mike Husby’s liberal use of doglegs, bunkers and water keeps anybody who likes to go the distance thinking hard about club selection.

Hole No. 1 – a sharp dogleg to the right, bordered at the bend by bunkers, flanked by three more at the dance floor and chopped in between by a wide band of water – sets the stage. Half the holes at The Loon have water hazards; all have deep, sculpted bunkers along the fairways and greens. While the traps proved wildly unfriendly to me, and the water downright mean to my partner, neither of us could deny the extra oomph the ponds afforded our round: a few close-up views of classic Northern Michigan nature and plenty of sublime scenes. As for the sand, well, it was a learning experience.

The back 9 demands even more of its players, thanks in part to two huge par 5’s that, even from the forward tees, round out at 461 and 433 yards. But it’d be a shame to stop swinging after the front 9. The 18th hole is often said to be the finest finish in the Mecca, and anyone who’s a sucker for an elevated tee box, big trees, bigger water and a green with as many tiers as a wedding cake will agree.Our assessment? Men and women, newbies and pros, golfers and nature buffs alike will love what The Loon has to offer.

Get There: From I-75, exit 279. Go South on Old U.S. 27 (S. Otsego Avenue) for 2.3 miles. Turn east onto Charles Brink Road and travel approximately 1/2 mile. Turn north onto Championship Drive.

Master Strokes: Undulating and uncontrived, The Natural’s landscape is said to have never been touched by a bulldozer. As a result, knolls, berms and basins are abundant though moderate in the way of Northern Michigan’s natural terrain. Greens are generous, but fairways here are tight – real tight – so those with a tendency to slice and hook should prepare to get intimate with the trees and marshes of the North’s great outdoors or else abandon their AWOL balls. Worth noting: Women get a great break on the forward tees, so those playing with a power-hitting male partner would do well to set up a skins game in the parking lot before heading out.

Threetops at Treetops Sylvan ResortPar for the Course: Deep ravines, sharp elevation changes, scenery befitting a national park, and the most fun a golfer can have in 90 minutes.

Master Strokes: Golfweek Magazine calls Threetops the "Best Par 3 in America," and trust us: That’s no exaggeration. This gorgeous course’s wild roller coaster terrain challenges players at every turn, elevating iron accuracy to an art form and forcing even the strongest shortgamers to step it up a notch. No doubt, that’s why the likes of Arnold Palmer, Jack Nicklaus, Raymond Floyd and Phil Mickelson have made a point to trot out here for ESPN’s annual Par-3 Shootout.

Our fave holes? No. 7 – the High Five – with its 150-foot-drop between tee and green, and No. 6 – Harry’s Way – which soothes players mired in one of the six bunkers or big water with an amazing valley view. The only complaint we have about this 9-hole experience is that it’s over too soon. Luckily, those who want to keep swinging won’t have to go far because Treetops offers four more phenomenal courses on site: Robert Trent Jones, Sr.’s Masterpiece, Tom Fazio’s Premier, and Rick Smith’s Signature and Tradition.

Get There: From I-75, exit 282. Turn east on M-32. Take M-32 all the way through Gaylord. Turn left on Wilkinson Road. Continue east for 3 miles to the resort entrance.

Master Strokes: Leave Bertha in the bag; next to The Natural, Marsh Ridge wields some of the narrowest fairways in the Mecca. With lots of wetlands and elevation changes, a couple of blind uphill approaches and some serious call for carry-overs, Marsh Ridge is the thinking player’s course. Those savvy with the short sticks will fare better than any unbridled power hitters, but all players are in for major fun – and requests for extra mulligans – because do-overs are irresistible when playing pretty holes like these. Our fave? No. 8 – the ride over from No. 7 wows with a stunning wilderness scene, then sets up players with a short but demanding shot over a deep ravine that, if biffed, begs to be played again and again.