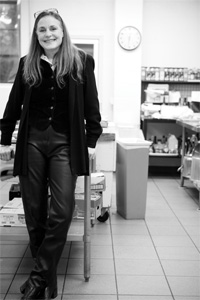 What’s the secret to your exceptional pot pies?
They never evolved as something to use up leftovers. It’s a two-day process. All the meat is hand trimmed; we use fresh chicken thigh meat as well as breast meat. I believe in fresh herbs – dry are kind of like grass clippings in your food! All our stocks are homemade too, for the pot pies and our soups.
What are some recent soup triumphs?Smoked whitefish chowder with a lot of Spanish paprika and Spanish saffron, tomato and chunky potatoes. We do a nice corn chowder, too. We get corn in season at Bill’s [Farm Market in Petoskey] and cut as much as we can for freezing.

So you are an advocate for freezing?We had bushels of gorgeous red peppers from Bill’s and I said, Look, this is like gold, we’ve got to cook these and puree them, have them for soups and sauces. Same with berries.

Your market is becoming famous for fantastic artisan cheese. What are some good flavor pairs? Licorice jam from Calabria – we’d put that with double- and triple-crèmes. Fig jam from the former Yugoslavia with the Spanish Manchego or with Brie. We have one fabulous Sicilian rosemary-flower honey from a beekeeper named Salvatore. He has bushes of rosemary everywhere. He brings his hives to the rosemary.

This article was first published in February 2008.