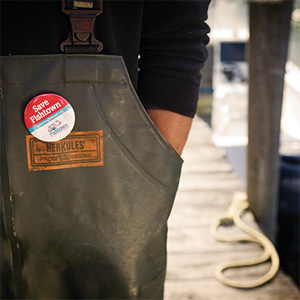 Bill Carlson’s faith that the community would save Fishtown proved correct. In February 2007, after a seven-month fundraising whirlwind, the Fishtown Preservation Society (preservingfishtown.org) became the new owners of the iconic fishing village.

Like Carlson, the board members share emotional attachments to the slice of history. There were no ice cream cones, sandwiches or T-shirts in Fishtown when Joanie Woods, the organization’s treasurer, was a child, summering in a family cottage down the beach. But she says it was still the place to hang. "We’d paddle down at the end of the day, watch the boats come in, talk to the fishermen about their catch. Watch the cats."

Craig Miller, chairman of the organization’s board, recalls sailing a toy boat at the mouth of Leland River as the fishing boats came in for the day.

When the Fishtown Preservation Society set out to raise $2.5 million of the $3 million Fishtown purchase price between June 12, 2006 and December 31, 2006, they banked that they weren’t alone in their passion. They also believed the region would step up and help save a major tourist attraction, second locally only to the Sleeping Bear Dunes National Lakeshore.

Still, four months after the Fishtown Preservation Society officially became Fishtown’s new owner in February of this year, Woods and Miller can hardly believe the outpouring of support that started in Leland, reached across the nation, and clinched the deal to buy and preserve Fishtown. The donations were large – and as small as the $10 that came with a letter from a woman in Virginia telling about her family’s wonderful memories in Fishtown. Donors included the children and grandchildren of some of the people who bought the Goodwill for Lester Carlson after his tragic fishing accident in 1941 (see accompanying article), and kids who offered the proceeds from their lemonade stands.

Keith Burnham, famed for his Leland Report Web site that features a daily photo of the Leland area (so that Leland aficionados can get their daily fix from anywhere in the world), posted an icon of a tug on his site. As the donations went up, so did the water under the tug.

At the peak of the frenzy, Woods and Miller, with plenty of help from other board members, volunteered 60 hours a week, publishing brochures, giving talks and meeting with donors. They worked without staff or office space – unless you count a phone in the Leelanau Conservancy’s office, a post office box and their cars. "I worked out of the back of my Tahoe," says Miller, who was an attorney before he retired to Leland.

This spring meant a short breather, a new office in the Leelanau Historical Museum and an administrative director, Amanda Holmes. Nevertheless the members of the Fishtown Preservation Society have their challenges cut out for them. The most pressing need is fundraising – they’re still $500,000 short of the $3 million purchase price.

Since a main goal of the organization is to keep Fishtown a working fishing port, they will be managing Bill Carlson’s former boats the Janice Sue and the Joy, from hiring the fishermen to take them out, to holding the commercial fishing licenses. Then there is the problem of how to interpret the century-old icon. Should Fishtown be restored to the 19th century? The early 20th? Stay as it was the day Bill Carlson handed over the keys?

But as the summer of 2007 gets underway, the new owners of Fishtown’s 11 businesses and 7 historic buildings are learning to be landlords. "Right now it’s things like, where will the Dumpster go," says board member Kathryn Eckert.

Note: This article was first published in July 2007, and was updated for the web February 2008.