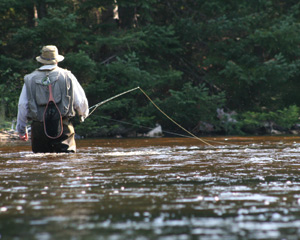 When 16 men gathered in the Au Sable River cottage of George Griffith in 1959 to form Trout Unlimited, now an internationally respected river conservation group, they chose a location worthy of the event. The Au Sable River is an American treasure, with unmatched stable water-flow and steady, cool temperatures that make it some of the premier trout water in the nation.

Get a dose of that legendary H2O by stepping into the current, fly rod in hand, in the same stretch where Trout Unlimited began, a run called the Holy Waters. Start your fishing day with a from-scratch breakfast at Gates Au Sable Lodge (at Stephan Bridge, 989-348-8462, gateslodge.com). After breakfast, take some time to read the old fisherman’s logbook then duck into the on-site fly shop.

Keystone: Broad water here makes it easy to keep flies out of the brush and not spook fish. Wade easily downstream on the solid bottom a half-mile or more, then walk back on the public land along the south shore. Take M-72 to Keystone, north to the river.

Guide’s Rest: Owned by Trout Unlimited, this stretch of publicly accessible shore runs a mile on both sides of the river. Start at the north parking area and work the river down to the south parking area. Walk back on the road that connects the two. Andrus suggests a compass because the trail in gets a little confusing as it commingles with deer trails. North Down River Road to a half-mile west of Stephan Bridge.

Knight Tract: Make a few attempts at the giant but wily trout said to populate Gould’s Hole here, but then move on to wade the 4-hour trip down to Wakeley Bridge; walk back on the road. M-72 to Wakeley Bridge Road, north over the river. Look for the subtle sign to the west.