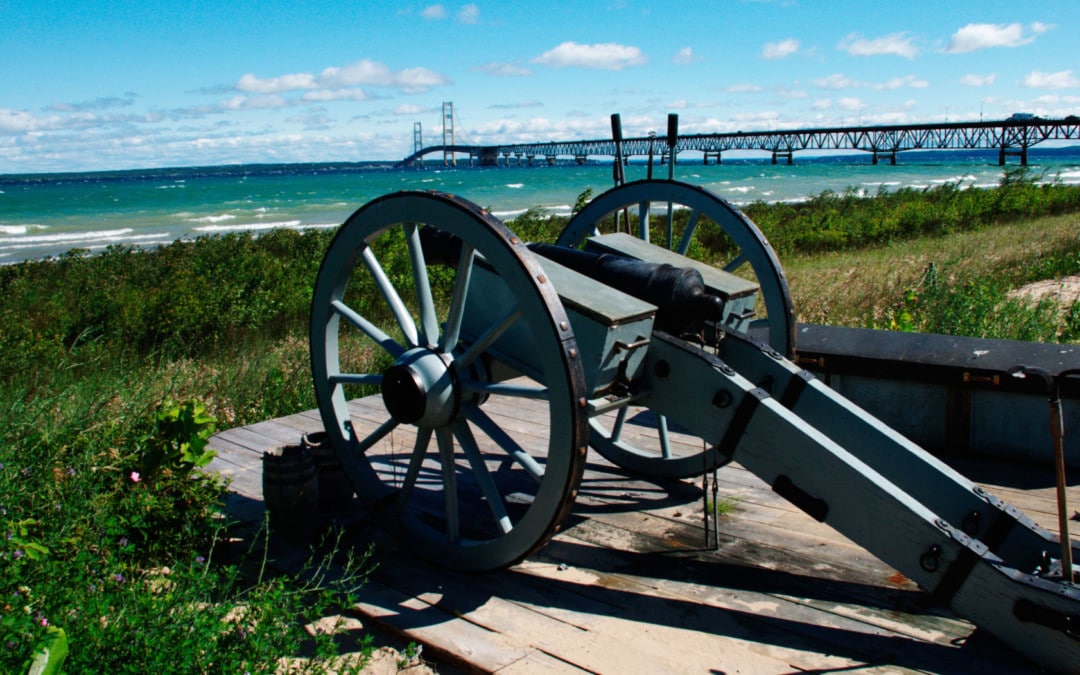 Across from Mackinac Island on the mainland, Colonial Michilimackinac in Mackinaw City is a living time capsule: the clock is turned back to the 1770’s when the British controlled the Great Lakes. At this preserved colonial fort, kids can try on a redcoat, watch soldiers fire their muskets and a cannon, and even enlist in the British army. Proof that history was really made here? Colonial Michilimackinac is the site of the nation’s longest-running archaeological dig. It’s a must-see for adults and children during any Northern Michigan vacation to Mackinac Island and the Straits of Mackinac.

Don’t be alarmed at the blue smoke wafting out over Lake Michigan as you pull up to the Colonial Michilimackinac Visitors Center on Huron Street in Mackinaw City. It’s just the wispy remains of a massive, booming, 18th-century cannon firing over the water—one of many demonstrations reenacting the way life was more than 200 years ago at this fur trade village turned military outpost.

Step inside the visitors center and purchase your day passes, then pick up a schedule of events. The passes are good all day, so swing into Mackinaw City for fresh blueberry muffins, bottled juices and crumbly soft raspberry-swirl cookies at Mackinaw Bakery & Coffeehouse before beginning your adventure.

Back at Michilimackinac, wander the sandy path along the shoreline and walk into the fort through its impressive entrance. Each building has been reconstructed on the foundations of the original structures—venture into them to see the root cellars, basements and floors of 18th-century homes. And there’s plenty to do besides touring buildings. You can dance at a reenacted French colonial wedding, get giggly on the parade ground while playing colonial-era children’s games, or peer down into the Black Hole, where British soldiers were locked up for bad behavior.

As a long-running archaeological excavation site, Michilimackinac is constantly evolving. Pause to watch an archaeological dig in progress, then head over to the Northwest Rowhouse where an extensive exhibit displays artifacts unearthed on this property: china bowls pieced together, fishing weights, musket balls, pipes, crosses, arrowheads, beads and rings. More treasures—replicas of quill pens, pewter dice, hand-rolled marbles—await back in the visitors center, so you can take home your own piece of history.

Admission fees for Colonial Michilimackinac are as follows: $12 for adults, $7 for children ages 5–12.