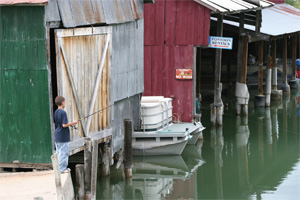 It would be a sin to start your adventures in Alanson without stopping in the Dutch Oven Shops (231-548-2231, dutchoven.com). Open at 6:30 a.m. Tuesday through Saturday, this local landmark is part bakery, part cafe and part yarn shop – a sensory feast for early risers. Keep it simple with a steamy bowl of old fashioned oatmeal served with dried cherries, almonds and brown sugar, or go for broke with the French toast strata: a hefty slice of the Dutch Oven’s legendary cinnamon bread stuffed with cream cheese, apples, pecan praline sauce and Michigan-made maple syrup. Peruse the pastry counters for Old World specialties like gingerbread and butter tea biscuits, then bag a few cinnamon rolls for the road.

Drive down U.S. 31 and turn onto River Street to find Spanky’s Jet Ski & Pontoon Rental (6329 River St., 231-548-4800). An 18-foot, eight-person pontoon rents for $175, so bring a crew (and those cinnamon rolls) to while away the day on the headwaters of the Inland Waterway (irchamber.com) – the 38.2-mile water route that crosses the tip of Michigan’s mitt and empties into Lake Huron.

You’ll launch your craft in the Crooked River, a short float that leads to Burt Lake, one of the waterway’s two big blue gems (the other is Mullett Lake, further east) where you can view the beauty of Colonial Point, a nearly 500-acre peninsula divided into two nature preserves. To the east is Chaboiganing Nature Preserve, a younger forest of mixed hardwoods like sugar maple and hemlock; to the west is Colonial Point Memorial Forest, featuring mature white pines and century-old oaks.

After you meander back down to Alanson, duck into W.W. Fairbairn & Sons (7537 Burr Ave., 231-548-2244), a hundred-year-old hardware store and a Michigan Historical Site. The shelves here are stocked with typical handyman doodads, plus unexpected surprises like badminton rackets and ice cream makers. Dinnertime already? Mosey up the block to Bob’s Place (7515 U.S. 31, 231-548-2396), where the Friday fish fry includes all-you-can-eat cod served with steak fries and homemade coleslaw. TGIF indeed.