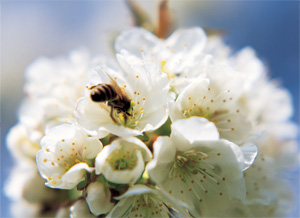 There’s been buzz for months now about the mysterious condition causing tens of thousands of honeybees to abandon their hives and vanish, apparently to die. Dubbed Colony Collapse Disorder, this strange phenomenon has been reported in parts of Europe, Asia and Canada, and in 24 states, including Michigan. So far, scientists are stumped; the list of suspects includes pesticides, pathogens, malnutrition, mites and genetically modified crops. In the spring, rumors swirled that even cell phones could be to blame – that perhaps the electromagnetic radiation interfered with bees’ internal homing devices – but researchers pretty much have quashed that claim.

Still, this sudden, unexplainable disappearance of so many bees has made the agricultural community nervous – experts estimate that a third of our daily diet comes from crops pollinated by bees. Here Up North, sweet cherries and apples depend on honeybee pollination, though local farmers are too busy with the season’s crops to be concerned about CCD just yet, says Nikki Rothwell, district horticultural coordinator for the Northwest Michigan Horticultural Research Station.

Though it might be too early to worry, the equation presents a grim prospect: No honeybees, less food. Which is one reason why, three years ago, the folks at the research station started studying the mason bee. This solitary bee doesn’t make honey, but it does pollinate crops, providing a think-ahead plan that makes us rest a little easier. Even Rothwell likes to keep a positive spin on the local situation: “The one good thing is that grapes are pollinated by the wind,” she says wryly. “So we don’t have to worry about wine.”

Note: This article was first published in August 2007 and was updated for the web February 2008.