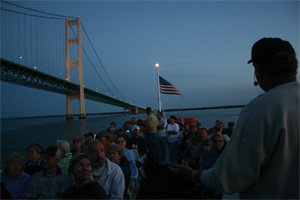 Cross the five-mile Mighty Mac to the Upper Peninsula early enough to catch dinner hour at Clyde’s Drive-In in St. Ignace (U.S. 2, just west of I-75, 906-643-8303). In true 50’s fashion, eating in your car is allowed, but the atmosphere indoors adds to the fun. Slide into a swivel chair at the counter and order up a straw-clogging chocolate malt. Ordering dinner is a delight – it just might be served in a cardboard box shaped like a classic Chevy.

For a fab sunset cruise, head to St. Ignace’s Arnold Line (800-542-8528, arnoldline.com) docks when shadows start lengthening and the lake turns a moody shade of cobalt. Even if you call ahead to reserve a spot for the sunset cruise on the Mackinac Straits, you’ll want to jump in line early to snag a primo seat. Benches near the front (hold on to your hat) offer the best view, but passengers are free to move around the deck to snap pictures from every angle.

As the ferry motors around the Straits, reporter Mike Fornes from the Cheboygan Daily Tribune spouts history and local lore. Score bits of trivia and picture-perfect shoreline views of St. Ignace (the third oldest city in the United States) and Mackinac Island (it carries the "ac" ending because it was a French settlement; Mackinaw City got the British ending), and hear how people crossed the Straits before the bridge was built. It’s hard to imagine parking and waiting 24 hours for a car ferry on peak weekend, but back in the 40’s and 50’s, plenty of Michiganders thought deer hunting season was worth the long wait to get across the Straits.

When the sun starts to sink, the captain steers the boat to frame the sunset between the bridge supports. Get ready for a Kodak moment when the last rays splash pastels on the horizon and light up the bridge. A hundred million tons of concrete and steel never looked grander.

Katie Holland was an intern at Traverse, Northern Michigan’s Magazine.