Confession of a Carp Fisher 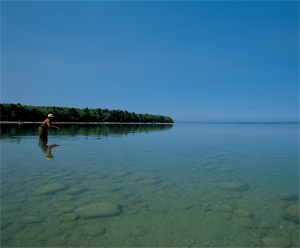 It’s hard to pinpoint exactly when my relationship with trout began to sour. We had a good run, so to speak. Then all of sudden the whole thing started feeling one-sided, like being in a bad relationship, with the time and effort I expended day after day seeming more than a little disproportionate to the return. I grew restless and weary of the same old routine. Too much small water. Too many small fish.

My disenchantment perplexed me, because I moved to the paradise of Northern Michigan in large part to surround myself with more Blue Ribbon trout water than a miserable angler like me deserves. Trout had been my love; they were what pulled me into fly-fishing. Then one day the kick was gone. Maybe we just needed a break, I thought.

Like any fly fisherman, my angling image is inextricably bound to trout. I wholeheartedly embraced the cult of fly fishers, one whose principles declare that the committed always and forever pray at the Altar of Trout and ne’er do worship false fish gods. So I was unable to admit to my fly-fishing cohorts that I had let an entire summer pass without once soaking my shins in the holy water of the rivers. Where had I been?

My sunburned nose and white raccoon eyes – from too many days spent scrutinizing open water through polarized fishing glasses – were as impossible to hide as my cavalier grin, the smile anglers can’t help but wear when they’re regularly doing battle with giants.

My purist friends suspected a little piscatorial heresy and eventually spotted my truck parked along some remote piece of Lake Michigan beachfront. There was nothing left to do but stand firm, square my chin and confess that, yes, I had discovered carp fishing and, by God and the ghost of Norman McLean, I can’t remember ever having more fun with a fly rod in my hands.

After all, this is about catching big fish, not making excuses. The common carp has been kicked around as “trash fish” ever since a boatman accidentally dumped a couple boxes of them (some reports say fewer than 70 fish) into the Great Lakes around 1879. I’m not an advocate of invasive species, but after 100 years, it’s clear the carp is here to stay. So I indulged in the fishing opportunity they provide.

It happens like this: Every spring along the sandy shores of Lake Michigan tens of thousands of carp emerge from the depths into the warm beachfront shallows. They come en masse to spawn, eventually breaking up into small groups and pairs to feed on crayfish and nymphs and other goodies hiding among the rocks – hence the opportunity to carefully present a fly.

The challenge and the fun lies in getting close enough to make an accurate cast. For the fly fisherman – what with the mesmerizing blue water and the herring gulls calling overhead – this means a sunny, coastal experience that compares to sight casting for cruising bonefish in some exotic and more expensive palm tree destination.

But I’m getting ahead of myself. And I also have to say that I didn’t fall from trout-grace alone.Every facet of fly fishing has its experts, and the man who instigated my corruption – or conversion, depending how you look at it – is a friend, local fishing guide and fellow heretic, Dave McCool. McCool first discovered carp fishing while taking a break from trout himself. Casting for bass out on the open water, he had a 20-pound carp nail his fly. You might say business hasn’t been the same since.

The cult of carp fishers is small, but growing. McCool now divides his summers between driftboat trout fishing and flats-style wade fishing for carp. This year the action got started around the middle of May, a chilly time on the open water near the 45th parallel, when so many carp began appearing in the shallows, the schools churned like black storm clouds under the waves.

We wore waders, layers of fleece, rain jackets and, as always, good polarized glasses for cutting the glare. Our weapons of choice were eight-weight rods, good for bucking the wind. You could see the carp from the road hovering suspended in knee-deep water. And just as McCool said, becoming connected to a fish proved simply a matter of landing your black woolly bugger or crayfish imitation near one.

I watched McCool stalk to within easy casting distance of a submarine-sized carp that was head down and swishing his tail among a cluster of boulders half exposed in the noonday sun. McCool made a subtle presentation – a series of slow, scuttling strips – and then the fish turned on the fly, engulfed it, and at the pinch of the hook slashed and rolled atop the water in a most un-carplike display. I soon became similarly engaged with another fish that hit hard and ran deep, the neon-colored fly line and Dacron backing disappearing after it as if shot from my rod tip like a laser beam.

A word about the violence of the strike: Imagine casting your fly into rush hour traffic and snagging the bumper of a runaway cab. If the fish doesn’t snap your puny 8-pound leader – or break your flimsy underspined rod clean off at the butt-section (the initial hit can be that wrenching) – expect a fight unmatched by most anything in freshwater. Consider as well that the average 7- to 8-weight reel holds about 150 to 200 yards of backing. After most fly fishermen wind this up under their fly line, how many ever do the kind of fishing that takes them that deep into the reel again?

Months later McCool and I are well into the backing again. With the wind low and the summer sun high, we shed our waders and cold-weather gear. The flat water radiates emerald green near shore and evolves to a disarming deep-sea blue closer to the center of the bay. Wide-brimmed hats, short pants, and flats shoes complete the idea that both McCool and I might well be prowling the reefs off Easter Island or some salt flat in Belize. Certainly the carp are every bit as powerful as the bonefish you find there. In fact, one might say a puny 8-pound bonefish doesn’t have much on a 30-pound carp; the former has simply been blessed with superior press.

There’s not space enough here to tell about every fish we landed that day. But the sore muscles are easily described. The pinch high in my back from taxing muscles rarely used, the soreness in my hands from white-knuckling a fishing pole for a couple of hours straight. For weeks I carried with pride a purple bruise on my belly where the butt-section of the 7-weight fit. The picture I have from that afternoon is of the fish – walking among thousands of them – and the power of the ones caught, one after the other, how they bolted heavily away with enough neon-colored fly line arching after them to span a couple of football fields.

McCool landed the best fish of the day. A truly magnificent specimen that easily weighed 40 pounds. He spotted the bruiser cruising with another in a boulder garden of sun-whitened stones. The water was only shin deep, and McCool spotted the golden back of the larger carp cutting a V-wake parallel to shore. McCool’s cast landed well ahead of the two. With a nudge of the fly, the big one was on.

Up until then, our tussles lasted roughly a quarter-hour before the fish finally tired. The runs were drawn-out affairs with much of the fight spent simply reclaiming lost line. But this fish headed straight away, never yielding, and after a minute or two without slowing, it looked like McCool might be “spooled clean.” Finally, it did turn, and a half-hour later we got a look at the fish, a broad-backed monster with shoulders (yes, this fish had shoulders!) so wide a kindergartner could have ridden it like a pony.

It didn’t hit me during the fray, but sloshing back toward the beach after releasing the fish, McCool pointed out how we hadn’t seen another person fishing all afternoon. And what a beautiful day it was. So quiet and, with the waves gently lapping on the shore, so serene. I imagined a different scene on the trout streams farther inland: fly fishers no doubt poised on every bend, swatting at mosquitoes, while they cast for hours to catch just one smallish, skittish and finicky trout.

Note: This article was first published in June 2004 and was updated for the web February 2008.