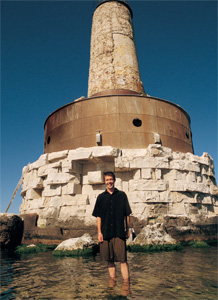 In 1998, Christopher West heard a rumor: The Coast Guard planned to tear down Waugoshance Point Lighthouse. Built in 1851 and decommissioned in 1912, the structure once housed the first Fourth Order Fresnel lens of any Great Lakes lighthouse. It was one of only three Great Lakes lighthouses equipped with a “bird cage”-style lantern room. And it marked the site of one of the Great Lakes’ first lighthouses — a wooden vessel-turned-lightship set atop the Waugoshance shoal in 1832.

But West didn’t know any of that. He simply heard the demolition plan and thought, “No. That just isn’t cool.” Then he set about trying to save Waugoshance.

Although just 23 and, as he says, “totally clueless,” West organized the nonprofit Waugoshance Lighthouse Preservation Society, moving to nearby Mackinac Island to drum up support. This past summer he spent his days off from his job at a local island bar tackling the first phase of his preservation mission: lighthouse cleanup — that is, toting all the rubble that can fit in his hand-me-down 20-foot Sundowner from the crumbling structure to the dump.

He doesn’t mind: “I have a boat, and I get to drive across Lake Michigan and hang out at a lighthouse. C’mon. That’s pretty cool.”