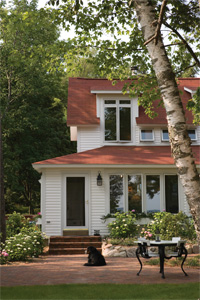 Debbie Crane spotted the tiny classified ad in the local shopper: 100-year-old farmhouse on the bluff in Harbor Springs, $12,000. It would have to be moved, because the owner wanted to build something else on the site.

What a deal, Crane thought, hoping the price in the paper wasn’t a misprint. She had just the spot—a fabulous patch of beach just off the Tunnel of Trees near Cross Village. Crane jumped in her car and raced over to see the place. The two-story frame house with detached garage was obviously in need of some TLC, and she couldn’t see inside because the shades were drawn.

Yet, says Crane, an attorney, “I loved it.” She immediately called the owner, who lived downstate. The price was for real, he told her, and he had a long list of people who wanted to see the house. Crane persuaded him to let her see it first. He agreed, with a caveat: she had to decide on the spot if she wanted it.

When she finally walked inside, Crane looked at the murky maple flooring and similarly dark-stained beadboard, swallowed hard and took the plunge.

Crane called Petoskey house mover Adam Richie, who said he could do the move. The roof—trusses and all—would have to come off, and the rest of the house and garage would travel in three pieces the 18 miles up State Street to Cross Village. Adam’s brother, Dwayne Richie, would lay the foundation in advance. In the meantime, Crane had to remove the second-floor beadboard paneling that covered the walls and ceiling and label it so it could be reinstalled easily. Luckily, the main floor paneling could stay intact.

On moving day, after the first floor was lowered onto the foundation, Crane had to make one more snap decision. Adam Richie wondered if she wanted him to raise the second story ceiling another four feet.

“We had to put in new studs for the roof anyway,” says Richie, “and she was looking for more room.” So Crane gave the okay, not realizing that until she got her builder over to fill in the four-foot addition, air would be flowing through that wide-open space.

But it all worked out. Crane is delighted that her instincts were good. Before the move, the farmhouse was a little crooked, and now it’s standing tall—rewired, replumbed and restored from top to bottom. The dark-stained beadboard now wears satiny shades of ceramic paint that could have been mixed in a candy shop: sweet cream, butter yellow, taffy pink, mint green, pale lavender. Crane had them custom-matched to the fabrics she used to upholster her 1930’s-inspired furnishings. And the maple floors are back to their original light shade of honey.

Upstairs, what once was one big room has been turned into a deluxe master suite. Thanks to the extra four feet, there’s a soaring skylight that frames the sun and moon, and tall windows that showcase a delicious view of the gardens, the beach and all those incomparable sunsets over Lake Michigan.

Crane may have bought this toasty place on impulse, but it came off like she’d planned it for years.

Note: This article was first published in May 2007 and was updated for the web February 2008.